Remember who the good guys are 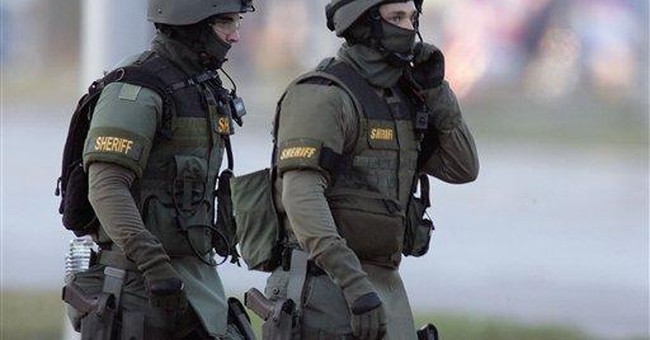 I am sitting here watching TV coverage of another shooting death of a police officer – this time, two sheriff’s deputies from Henderson County, Texas were killed by some creep – and I find myself getting angrier and angrier.

What is it about our culture that makes people want to pretend that the good guys are actually the bad guys? Every time I hear someone criticize our military or the men and women of law enforcement, I find myself asking that same question, over and over again.

Good guys being turned into bad guys. People do it all the time.

On my next radio show, I’ll pay tribute to the two brave deputies who were simply doing their jobs, responding to a domestic disturbance call, when some lunatic opened fire and shot them dead. I’ll point out how underpaid and dangerous a police officer’s job is, and how infrequently we stop to remember the great sacrifices they make.

And my phone lines will light up with callers who have all kinds of gripes and complaints about cops: there will be the guy who once received a speeding ticket he felt he didn’t deserve; the woman who thinks the police don’t patrol her neighborhood enough; or the angry militant who is convinced that the police are just a bunch of racists.

I’ll defend the police to these callers, asking how many of us would be brave enough to strap on a badge and carry a gun and try and keep the peace. I’ll point out to these whiners how we turn to the police immediately when we have a problem. And I’ll rightfully detail how relatively little their pay is for their dangerous, sometimes fatal occupation.

And then I’ll really get annoyed when I get the predictable call from the person who says that people who become police officers know the risks involved, and no one forces them to choose the career they’ve chosen.

As if somehow choosing to serve a community by becoming a police officer makes it okay to get shot by a filthy criminal.

I am really, really sick of the attitude of people who don’t appreciate law enforcement. Sure, there are “dirty” cops. Just like there are dirty politicians and dirty insurance agents, maybe even a few dirty broadcasters.

But overall, the men and women who elect to become police officers are heroes. They kiss their loved ones good-bye when they leave for work, hoping today won’t be the day that they have to confront a madman who wants to kill them.

Hearing the details about the deaths of these two Texas deputies just makes me mad. I’ll eventually be incredibly saddened by their murders, but right now, I’m angry. I know I’m going to be met with a bunch of people who have chips on their shoulders when it comes to the police.

The next time you want to rail against that speeding ticket you didn’t think you should have gotten, at least think of two families this week who are making the dreaded preparations to bury their brave loved ones.

Please remember who the good guys are.