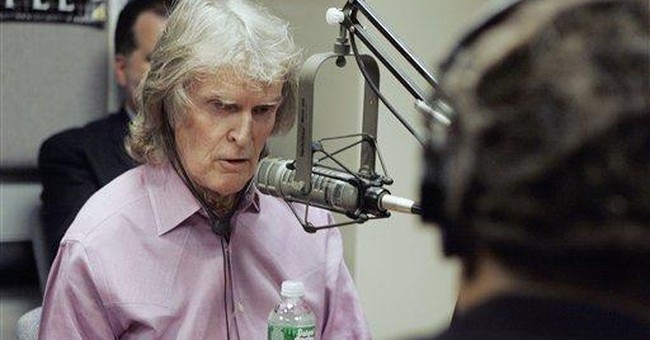 It's been disheartening to come to work this week and walk into my radio studio facing a phone bank full of callers who want to defend the despicable, ugly, racist rant by Don Imus.

Here are the arguments that people seem to be making on behalf of this vile, nasty old man: "This is free speech." "If Jesse Jackson can call New York 'hymie-town', why can't Don Imus call black girls 'nappy-headed hoes?'" "It's just humor."

What a depressing week.

Listen, when Rosie O'Donnell jumps on the Imus bandwagon by pretending that this is some kind of free speech issue ("What law did he break?"), I feel more confident than ever that I'm right to believe that Don Imus should hang up his goofy oversized Stetson and earphones and retire already. Rosie O'Donnell couldn't find the right side of an important issue if her life depended on it.

I'm certainly not any smarter than the passionate people who want to stick up for Imus. But since I've been working in broadcasting for nearly 30 years, hosting my first radio talk show in 1978, I think I've at least got professional working experience in my corner. After all, I didn't exactly make it to WABC-AM in New York City and then on to national syndication because I don't know the talk radio business.

And one thing about working in radio or TV that should be crystal clear to everyone: None of us who are talk hosts own the radio station or network that we're heard on. We may think we're the boss, but we're not. Like it or not, our microphone and audience comes with a responsibility. And when someone on-air shirks that responsibility by saying something as hurtful and ugly as calling a bunch of young black college girls "nappy-headed hoes," it's time to go.

As Newt Gingrich pointed out to me this week, the Don Imus fiasco doesn't have a thing to do with free speech. Free speech issues involve politically protected speech, not some crude act of public bigotry. When radio shock jocks Opie and Anthony orchestrated a stunt involving people having sex in the pews of St. Patrick's Cathedral in New York City in front of horrified worshippers, no one seemed to fret about their free speech rights being violated as they were given the heave-ho.

Incidentally, former House Speaker Gingrich, who might become a presidential candidate, believes that the Rutgers athletes have a good chance at winning a slander lawsuit against Imus.

No one is suggesting that Don Imus be jailed for his racism. When we start arresting people for ugly things they say, then we can whine about the threat of free speech being violated.

But decent people should stand up for doing the decent thing. Anyone who sees a group of successful black college athletes on TV and even considers the phrase "nappy-headed hoes" is a filthy racist. So anybody who appears on Don Imus' show is willing to appear to be supporting a racist. And any broadcasting company that continues to employ him is continuing to employ a bigot.

Watching the Imus train wreck this week has definitely been entertaining. Between his disastrous appearance on Al Sharpton's radio show -- from his "I can't get anywhere with 'you people'" to "I'll bet I spent more nights with black children who weren't related to me than you did" -- and his feeble, lame guest shot on the "Today Show" -- angrily trying to cut off Matt Lauer by calling him "Mark" -- it's been somewhat satisfying to see a man with so much contempt in his heart for black people have to squirm and twist in the wind.

Besides, I got a personal kick out of seeing myself become a punch line for Jon Stewart on his "Daily Show" on Comedy Central. He played a clip of a bunch of us TV talking heads talking about the Imus scandal and concluded with showing me on Fox News Channel saying "Nappy-headed whores" (instead of hos) and joking about how I evidently received the wrong information about the event. It was pretty amusing, but for the record, Mr. Funny-Man-Stewart, not everyone realizes that "ho" means "whore."

But let's try not to forget that a team full of somebody's daughters was deeply hurt by Don Imus and the ensuing publicity surrounding his comments. Imagine what it must be like to be a black American and have to witness this debacle.

As I said to the callers to my talk show this week who wanted to defend Imus: If someone called your daughter a whore, would that be OK with you?

More importantly, if you ran a radio or TV network and someone you paid handsomely said something as bigoted as what Don Imus said, would you keep him on the payroll?

I sure hope not.