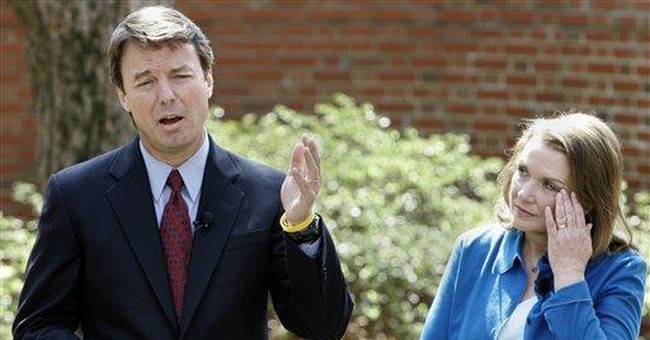 I've often suspected that I don’t really have the stomach for being a politician or even someone who could be a Washington insider or pundit who lives and breathes politics.

My reaction to this week’s press conference by Democratic presidential candidate John Edwards and his wife Elizabeth confirmed it.

Make no mistake about it: I wouldn’t vote for John Edwards if I were forced to do so at gunpoint. Well, maybe I would if my life was threatened, but I’d at least try to get the vote cancelled after I gained my freedom.

But watching Edwards and his wife face a throng of reporters and photographers and a nosy, inquiring nation and have to confirm any couple’s worst nightmare that a recurrence of cancer had occurred just broke my heart.

I understand that he's a presidential candidate. I realize that this announcement is newsworthy. But I wonder how many of us are able to put ourselves in John or Elizabeth Edwards’ shoes and even begin to feel what it must be like to be unable to deal with this enormous grief, anguish, fear, and uncertainty in private?

I don't like his politics and certainly hope he doesn't win in 2008. But I couldn't help but have tremendous admiration for the sheer courage it must take to face a bunch of reporters with your cancer-stricken wife by your side and face this potentially horrible future in such a public way. And what bravery it took for Elizabeth Edwards, looking gaunt and obviously still feeling the pain of the biopsy, having to smile and talk optimistically about something that we all know will be at the very least an enormously challenging, painful road ahead.

And then, to suffer through the inevitable post-announcement analysis was practically more than anyone should have to bear. Again, I know that presidential politics is mighty important. But to any of us who have had loved ones fight a deadly disease, there really isn’t anything else in the world as important as being with our wife or husband or mother or father or sister or brother or son or daughter as they fight for their lives.

Hearing Rep. Jack Murtha have the gall to compare the Iraq war, of which he is a fierce critic, to Elizabeth Edwards' cancer battle as he railed on the floor of the House, was pretty nauseating. Typical Murtha. Exploit anything he can to score points against the war.

And listening to people debate whether or not John Edwards is doing the right thing by continuing the campaign was equally disturbing. Only John and Elizabeth Edwards can make that decision. Frankly, I don't know what people expect. As the Edwards' doctor explained yesterday, when breast cancer spreads to the bone, there is no longer a cure, there’s just treatment. Hopefully, it’ll be treatment that lasts for years. Is John Edwards supposed to stay sequestered in his house along with his wife, the two of them wallowing in fear and misery?

Naturally, Mrs. Edwards expects her husband to continue pursuing his dream. For him to drop out now would only heighten the agony and only make everything worse.

There's not much about John Edwards' politics that I like, but no one who knows him or his wife have any doubt about the deep and profound love they have for one another. She won't have to face this alone. And if her condition should worsen, it's pretty obvious that her husband will be by her side, just like he was after their teenage son was killed in an accident.

There's nothing about this week's announcement that should change any opinions about whether or not to consider John Edwards our future president. Believe me, there's enough about his liberal ideology that should prevent us from electing him.

But a personal tragedy like this should transcend politics. Agree with him or not, this is a man – and woman – who are deserving of our prayers.

I can almost picture some die-hard politicos shaking their heads and clucking at my empathy for the Edwards. After all, politics is blood sport, right?

Not for me. Not in this case.

I guess I just don't have what it takes. Oh well, so much for my dream of getting elected to anything at all…