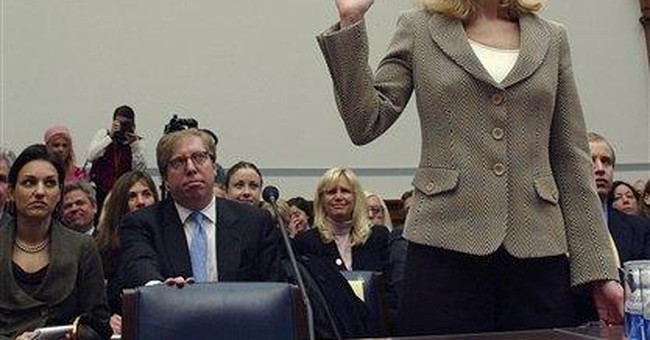 Move over, Watergate. There’s a big new scandal in America. The impeachment of a president? That’s child’s play compared to this biggie.

In fact, to read today’s papers, all the political controversies in our nation’s history combined don’t add up to the earthquake of a scandal that is rocking our world: the Bush Administration was involved in the firing of eight U.S. attorneys.

I’d love to be a fly on the wall of a high school social studies class when a student timidly raises his hand and says to the teacher, “Um, Miss Smith – if President Clinton can fire all 93 U.S. attorneys for obvious political reasons, why can’t President Bush?”

It’d be fascinating to hear what Miss Smith would say. If she’s a liberal Democrat hell-bent on destroying the Bush Administration, I suppose she’d say something to the effect that it somehow looks worse to fire eight people than all ninety-three.

But if she has a shred of fairness and objectivity, she’d answer the student’s question by laughing out loud at the absurdity of Democrats – and a couple of spineless Republicans – thumping their chest in outrage over a complete, total, meaningless, entirely non-issue.

I get tired of repeatedly asking fundamental questions that make me sound like I’m leading a group of mentally challenged people. Just like we often ask, “What is it about illegal immigrants you don’t understand?” we now have to ask, “What is it about the fact that the U.S. attorneys serve at the pleasure of the president that you don’t understand?”

Yes, all one has to do to respond to this idiotic firestorm of controversy is point out the obvious: U.S. attorneys can be appointed and dismissed by the administration for whatever reason it chooses.

I’m not exaggerating here; this is a laugh-out-loud contrived and concocted political “scandal.” Aided by a willing and enthusiastic Bush-hating news media, hypocritical Democrats are trying to convince the American people that a White House “connection” to the dismissal of these U.S. attorneys is somehow sinister.

I keep waiting and watching for a Democrat, any Democrat, to explain why Bill Clinton’s house-cleaning purge of 1993 is a different situation. In fact, I foolishly waited for former Clinton aide-turned ABC News “journalist” (ha!) George Stephanopolous to ask that of Hillary Clinton while interviewing her the other day about the “scandal.” Silly me. Why would the man who was at Clinton’s right hand in the middle of the mass firings and the woman who was at his left hand even touch on the subject in front of millions of viewers? Even a couple of rabid liberals like them know how to keep their mouths shut when it comes to reeking hypocrisy.

So the only thing left to ponder is why there’s been such a tepid, lukewarm, practically non-existent response from the Bush Administration and Republicans everywhere.

My theory is that there can only be one explanation: despite knowing that this is a non-scandal, conservatives have never really liked Alberto Gonzales and so they’re happy to see him twist in the wind.

I’ve heard the grumblings in the past about the moderate nature of some of Gonzales’ positions on social issues. Others say he is too mild-mannered and even bland for the job. In fact, his media appearances this week seem to confirm that. It really wouldn’t have been much of a stretch for the U.S. Attorney General to dismiss this entire affair with a laugh and an observation to the TV interviewers that politics is certainly blood sport.

Instead, he came across as the proverbial deer in the headlights, saying something about “taking responsibility” for certain aspects of all of this and practically acting like he robbed a bank.

Everything about this fabricated controversy stinks. And the worst part of it is this: if and when Gonzales – or Karl Rove – should happen to resign in order to get the world off President Bush’s back, the bullies of the media and the Democratic Party will wallow in victory and be more monstrous than ever.

One of these days, our side will wake up and realize that you gotta fight back.