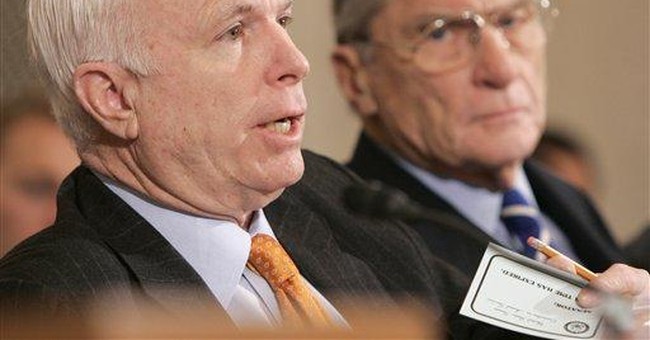 I don't ever remember presidential candidates jumping out of the box so early before a presidential election year. I guess a war has a way of doing that to American politics, especially a war as complicated and difficult as the war in Iraq.

So let's pretend that it's 2008 and the Democrats have settled on their ticket and the Republicans are ready to roll with theirs.

First off, a Democratic ticket has to include Hillary. She's worked her whole life to get to the White House as commander in chief, so her candidacy is as inevitable as her flip-flop on the war (remember, she voted FOR the war before she decided to be AGAINST it).

So just to conduct this exercise, let's say it's a Clinton/Barack Obama ticket. Who do Republicans have that could really upset the Democratic apple cart?

When Rudy Giuliani made it official this week, a strange feeling came over me. Just like the feisty crime fighter stood up to organized crime and panhandlers alike in New York City, perhaps America is yearning for a straight shooter like Rudy.

Love him or hate him, "America's Mayor" enjoys a well-deserved reputation as a tough, blunt, forceful leader. And perhaps what we need now, more than ever, is a presidential candidate who doesn't really favor polls, a man who doesn't particularly like to play politics, and a person who seems destined to be a natural leader.

These are tough, complicated times. The trouble in Iraq is that we know what we don't know. We can't quite decipher who the good guys are versus the bad guys, what constitutes civil war and what kind of timetable we're facing.

Take it from someone living and working in New York City on Sept. 11, 2001. Rudy Giuliani has a way of sorting things out. He has a remarkable ability to explain himself and the challenges we face, in a way that people can understand, all without being particularly patronizing. In Rudy's world, winning isn't everything. It's the only thing.

He had New York City running like a well-oiled machine.

Frankly, the concept of seeing him in the Oval Office in 2009 is pretty compelling.

Of course, on many issues, he's no social conservative. Yet this week on Fox News Channel's "Hannity and Colmes," he managed to explain his pro-choice position by suggesting that he's more than capable of appointing judges who might well be in the mold of Justices Roberts or Thomas. Coming from anyone else, that might seem to be political posturing. Somehow when Rudy Giuliani says it, it seems quite real.

And who completes the hypothetical ticket? John McCain continues to be the darling of the center. Unpredictable as an across-the-board Republican, the war hero from Arizona might just be what the country is longing for.

A Giuliani-McCain ticket would be the Democratic Party's worst nightmare.

I would have loved to have seen Mayor Giuliani to have become a senatorial candidate when Hillary made her decision to run in New York. I happen to believe that had he not faced health and marital problems at the time, he would have run against her, and cleaned her clock. People think Hillary Clinton is tough? You really don't know tough until you've taken on Rudy.

So a tough, crime-fighting straight shooter paired with a centrist Republican war hero on the Republican ticket?

I'll bet it's a prospect that keeps Mrs. Clinton up at night...