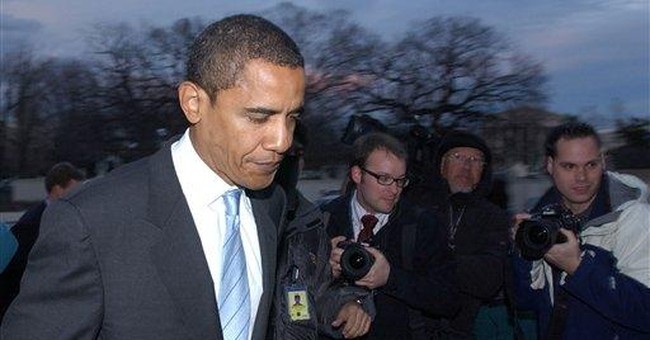 Move over, Abe Lincoln. Barack Obama has arrived to claim your legacy.

When I saw the headline in my morning paper that read, "Comparisons Begin Between Obama and Abraham Lincoln", I practically spit my orange juice all over the kitchen table. Barack Obama is being compared to 'Honest Abe?' And the article went on to explain that the similarity isn't about the state of Illinois. Remember, Abraham Lincoln only served two years in the House of Representatives before he became President. Get it? Two years in the House for Lincoln, two years in the Senate for Obama. Instant connection.

I'm trying to steel myself for tomorrow's headline that will undoubtedly compare Sen. Obama to Jesus Christ.

Yes, Barack Obama-mania is upon us. And this week's hip, open-collared internet announcement (no stodgy press conference at an old-fashioned podium for THIS guy) that he's throwing his hat into the presidential ring has just intensified the adulation and euphoria.

Listen, in this Oprah Winfrey age, nothing beats being knighted by the queen of daytime TV herself. So when Ms. Winfrey expressed her strong support for the handsome, charismatic Obama with millions watching, well, hang onto your hat. It's going to be a wild ride.

Sen. Obama has already sailed through some potentially rough waters with barely a drop on his windbreaker and canvas boat shoes. Blame the white man for turning to drugs in high school, he writes in his book? No problem. Barely a ripple of reaction. Picture a conservative Republican writing about doing cocaine as a teenager because of racial angst and imagine what would happen. The editors at the New York Times would run out of ways to cover such a story from every angle.

But when it's the man with the oh-so-unique name, a big, warm smile, and a barely distinguishable Senate record? No worries, that was years ago, let's move forward. Heck, lots of frustrated teenagers probably turn to pot and cocaine when they're upset about authority figures or racial inequities, right? It's like wearing braces or getting a few pimples, rite of passage stuff.

Yes, Barack Obama is going to receive that revered status that many have yearned for but few actually receive: a free pass from the mainstream media. And that's going to give him an enormous advantage over Hillary Clinton.

It was enjoyable watching Sen. Clinton squirm on the 'Today Show' this week when Matt Lauer asked her about Obama's qualifications for President. She's no dummy and certainly knew better than to even attempt to answer that question. But her silly non-answer ("There's going to be a vigorous debate that the American people will decide") was lots of fun.

She should be squirming. Because when you combine the love affair that the media is having with Sen. Obama with the reality that millions of people positively despise her, you quite possibly have a Democratic juggernaut in the man.

Like it or not, Hillary Clinton (like her husband) is one polarizing figure. Barack Obama is not. While he's a textbook liberal Democrat with people asking plenty of questions about his lack of depth and experience, he's not likely to inspire the kind of passionate and enthusiastic contempt like she will.

No, the stars are all coming together in alignment for Barack Hussein Obama.

Abe Lincoln never had it so good.