Putting on the Fresh Person Fifteen 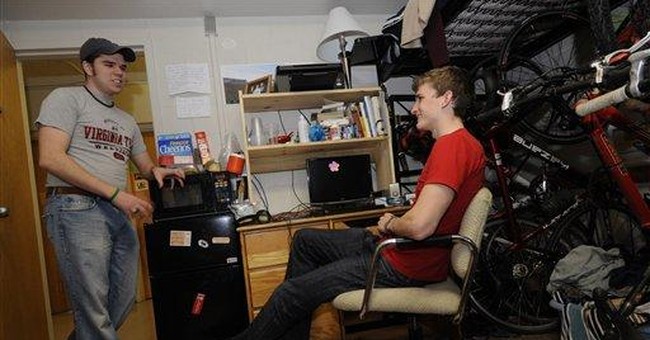 Author’s note: The use of an asterisk indicates that the college or university has revised its speech code thanks to the work of my friends at the Foundation for Individual Rights in Education, or FIRE. (See www.TheFire.org). The best source of information about campus speech in general is: Greg Lukianoff. Unlearning Liberty. New York: Encounter Books, 2012. Click here to order a copy now.

All week long, people have been sending me emails expressing their outrage at UNC Chapel Hill's decision to remove the word "freshman" from all university documents in order to be gender inclusive. But why are they surprised? And why are they writing to me to express their outrage? I've been telling readers for over a decade that they need to directly call and write the universities that are responsible for encouraging hypersensitivity through the use of campus speech codes.

If you do not know what a speech code is then you are probably new to my column. So here is a list of some examples that have actually been implemented at colleges and universities across America. If you write to complain, make sure your messages are written in stark violation of their campus speech codes. You are about to learn that it may not be very difficult.

*At Drexel University, prohibited harassment once included "inconsiderate jokes" and "inappropriately directed laughter." Students at Drexel had to be careful. If someone made a joke that was funny, they had to look directly at them. Looking the other way and laughing could have constituted harassment.

*Florida Gulf Coast University actually banned expressions deemed "inappropriate." Did you hear that one? I've always hated the expression "know what I'm saying." Does that make it a violation of the speech code? Or is it racist for me to suggest that it is? Know what I'm saying?

*Ohio State University actually banned jokes about differences related to "socio-economic background and etc." Hey, do you know the different between a Republican and a Democrat? A Republican drinks 12 year old wine; a Democrat drinks wine when he's 12 years old. Don't laugh! That could be a speech code violation! No need to rely on the catch all "etc" to violate it. Man, that’s rich! I mean person that’s poor.

CARTOONS | AF Branco
View Cartoon
*College of the Holy Cross implemented a speech code that banned even unintentionally causing emotional injury through careless or reckless behavior. Even a dog knows the difference between being tripped over and being kicked. But a Holy Cross administrator doesn’t seem to know. They got rid of the word “unintentional” but left the word “careless.” So you can still be nailed to a cross for accidentally violating this (w)hol(l)y ridiculous dictate.

Grambling State University has an email policy that prohibits offensive comments about "hair color." So if you make a dumb blonde joke, you might get charged with violating the school's hair-assment policy. I guess that sort of thing needs to be highlighted and then rooted out of the educational system. Bald assertions probably need to go, too.

Marshall University bans incivility or disrespect of persons. Better not go around saying "we are Marshall." That's exclusive and, of course, exclusivity is disrespectful.

*California State University - Chico banned stereotypic generalizations including continued use of generic masculine terms. How about this for a stereotype: most college administrators are bed wetting liberals. Hehehehehe!

*The University of Florida once threatened disciplinary action against organizations or individuals that upset the "delicate balance of communal living." I have no idea what that means so I can't say much in response. I just know it was written by an imbalanced communist.

Mansfield University bans any behavior that would diminish "self esteem" or "striving for competence." Right now I want to say that Mansfield administrators are incompetent idiots. But that might hurt their self esteem while they are striving for competence. It'll never happen. But let's make them feel warm and fuzzy while they try to strive for mediocrity. Sexist idiots! I mean, why don’t they call themselves Persons-field University?

*The University of Wisconsin - Whitewater banned "obnoxious jerk harassment" including "jokes, catcalls, whistles, remarks, etc." I don't get this. Does it mean I cannot harass an obnoxious jerk? What about Keith Olbermann? He's man enough to take it. Come to think of it, so is Rachel Maddow.

Some freshmen put on weight because they become physically lazy. Almost every other student becomes intellectually lazy throughout his college years. The reason is simple: someone is always telling him it's easier to be a victim than to respond to bad speech with speech that is better.