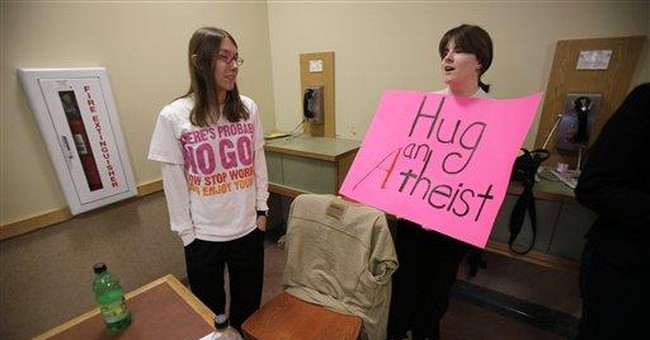 Help! The People for the American Way are after me! A Marxist professor at my university recently wrote a letter to the far left organization asking for help to stop me from ridiculing her in my nationally published column. She adheres to the belief that many liberals have today: liberals have a right to say stupid things in public settings without being ridiculed in a public setting.

This all leads to my belief that I’ve been wrongly defining liberalism for years. I think a new definition of the liberal is in order: A liberal is someone who only wants to be free from the consequences of freedom.

This tendency to seek freedom from the consequences of one’s free choices is seen in a lot of areas of liberal policy making. Here are some of the more obvious areas:

Abortion: Liberals support abortion not because they anticipate needing an abortion in the wake of an incident of rape or incest. They overwhelmingly want to escape the natural consequences (pregnancy) of a freely chosen decision to engage in sex outside of marriage.

Social Security: Saving money is difficult and it requires a lot of patience and a general willingness to delay gratification. Social security is nice for those who never get around to investing and saving money on their own. When the government does it for you, it insulates you, in part, from the consequences of your bad financial decisions.

National Health Care: A lot of people complain that you shouldn’t lose your health insurance just because you lose your job. What they really mean is that they don’t like their job and they only keep it because it provides a decent medical plan. One of the unanticipated consequences of the kind of single-payer national health insurance plan that Obama supports – and lies about not supporting – would be an increase in unemployment among able bodied individuals.

Separation of Church and State: Our Founders thought it would be a bad idea to have a national religion. But since the Warren Court era political liberals have been using this notion of a “wall of separation” to exclude from the public square all kinds of constitutionally protected religious speech. In reality, liberals don’t want a “wall” they want a partition – something they can take down and put back up in order to attack religion while banning close scrutiny of their ideas.

I see this all the time in higher education. Liberals teach courses in the Old Testament and harshly criticize the Judeo-Christian tradition as steeped in racism and patriarchal oppression. They teach courses in the New Testament, which try to paint the Apostle Paul as a great defender of both the patriarchy and the institution of slavery. One of the professors on my campus teaches that Paul was a paranoid schizophrenic and, hence, cannot be trusted on any subject whatsoever.

Ultimately, these folks hope that they can convert people away from antiquated religions like Judaism and Christianity and towards newer, hipper religions like multi-culturalism and diversity.

Some are not honest about what they are doing. For example, Bart Ehrman of UNC-Chapel Hill says that he is a “happy agnostic.” But that is silly. No college professor (of religion, no less) would say “I don’t know whether there is a God and, by the way, I am blissful about my ignorance.”

Bart Ehrman writes wildly biased books attacking Christianity because the self-proclaimed agnostic actually wants to convert people to atheism. Other professors in the UNC system seem to be a little more honest about what they are trying to do.

A course called "Atheism and Unbelief" is now taught by Professor Herbert Berg here at UNC-Wilmington. His course uses the following 7 textbooks:

1) "The God Delusion," by Dawkins
2) "Varieties of Unbelief," by Gaskin
3) "Atheism: Philosophical Justification," by Martin
4) "Eight Theories of Religion," by Pals
5) "Atheism: Very Short Introduction," by Baggini
6) "Letter to a Christian Nation," by Harris
7) "God is not Great," by Hitchens

There can be little doubt about what professor Berg is doing here. He is using several highly inflammatory and completely unscholarly books to attack religious belief in general and Christianity in particular. And he’s doing so in order to convert people towards a worldview of atheism and unbelief.

But this is not the way it should be. Our school in recent years has banned the Christmas tree and then banned the phrase “Good Friday” from the university calendar. We even have professors who have banned “A.D.” and “B.C.” from use in term papers. And we even have one department chair who wants to ban a professor from calling himself a Christian in emails to his students!

What kind of education are we providing when professors are teaching courses aimed at indoctrination into atheism? And what are we to do about it?

I’ll tell you what I intend to do about it: I intend to start my own course called “Theism and Belief.” It will be geared towards converting students to my own religion of Christianity. And it will only use Christian-friendly books like “I Don’t Have Enough Faith to be an Atheist” by Geisler and Turek and “Mere Christianity” by Lewis.

The problem right now is not that atheists at my school are often using the classroom to convert people into their own religion of unbelief. Misery has always loved company.

The real problem is that many of these atheists have made a free choice to attack traditional Christian beliefs and simultaneously wish to erect a “partition of separation” to keep Christians from defending themselves.

That will all end when I decide to teach my course in “Theism and Belief.” I think a free and open marketplace of ideas really is the American way. And I can hardly wait to hear the reaction from my friends at People for the American Way!