Incest is Best When Kept in the Family 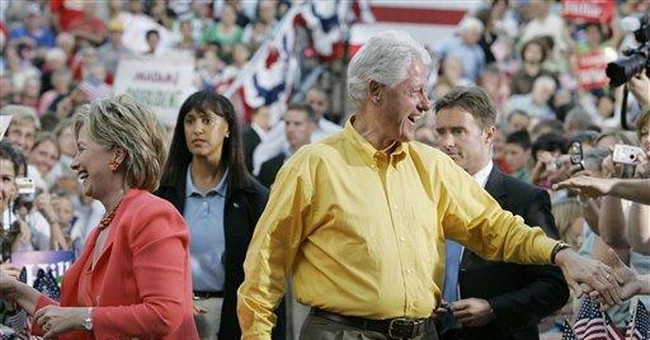 Lately, I’ve been going through a period of re-evaluation concerning some of my most deeply held beliefs. After years of teaching in the UNC system, I’ve decided that moral relativism is not as bad as I had previously judged it to be. In fact, on the heels of my recent decision to support the repeal of statutory rape laws, I’ve decided that progress demands we do the same with regard to incest.

My decision to support the legalization of incest is a direct result of hate mail I received last week from some Clinton supporters angry about a spoof quote I recently published. Some thought the quote suggested that Bill Clinton actually fondled his daughter’s backside at a restaurant in Washington, D.C. And, needless to say, I always listen to Clinton supporters when they offer moral condemnation. I really think I’m a better man for it. (I also take Hillary’s advice on investment opportunities whenever she’s in the mood to talk).

Some would respond to the accusation that I accused Clinton of incest by asking whether a man’s decision to fondle his daughter’s fanny actually constitutes incest. But I have a much more penetrating question: What is a liberal’s basis for condemning incest, or, for that matter, anything else as immoral?

Because so many of my colleagues in the UNC system are atheists, I have decided to reject any and all laws that are included in the Bible unless, of course, the atheists can articulate some objective standard outside of their personal moral qualms with a given behavior. I want to avoid violating the Separation of Church and State Clause that is written so clearly in the opening lines of the First Amendment. I also want to avoid living in a country in which people push their personal views about morality upon others.

By making incest legal we have a golden opportunity to create the kind of society that Margaret Mead argued could be established when she wrote about sexual mores in Samoa in the 1920s. By removing restrictions on sexual behavior we can remove all the guilt that goes along with it since such guilt is merely a socially constructed reality. Some would be quick to point out that Mead’s research was based on certain flaws and fabrications. But none of those considerations are relevant so long as our long term goals are laudable.

The case of Lawrence v. Texas, decided by the Supreme Court in 2003, may be one vehicle we can use to hasten the process of abolishing incest laws across the nation. Some legislators in backwards states might be unwilling to suffer the potential political consequences of a move to legislatively abolish incest laws. This is where the courts can step in and take care of things with one stroke of the pen – or, more accurately, five strokes of the pen. The Lawrence case did not say that incest is a constitutional right but, clearly, it can be seen as a move in the direction of allowing adults to engage in consensual incest so long as it is done within the confines of the home.

Given the increasing willingness of our Justices to ignore our slave-owning Founding Fathers and instead look to other nations to interpret our Constitution there is more reason for optimism. After all, France has no laws prohibiting incest unless one of the participants is a child.

But I envision a day when this country goes even further than France in its willingness to tolerate incest. By disallowing incest when one participant is a child we are certainly engaging in a form of age discrimination. Have you ever heard of an incest case in which authorities prosecuted the child rather than the adult after the incest was discovered? Case closed.

Finally, it should be pointed out that the way we currently enforce incest laws is ageist. How dare we send the message that an adult somehow “chose” to consent to a particular behavior but that a child was “coerced” and unable to consent to that very same act? In New Hampshire, children are allowed to consent to abortions without their parents’ guidance or even knowledge. The whole country needs to recognize and foster the ability of children to make independent decisions in even the most important of matters. Both the D.A. and the D.A.D. need to mind their own business.

I think I’ve devised a political initiative in which everyone can feel included. And I believe that’s all that really matters.