The Veit to Bear Arms 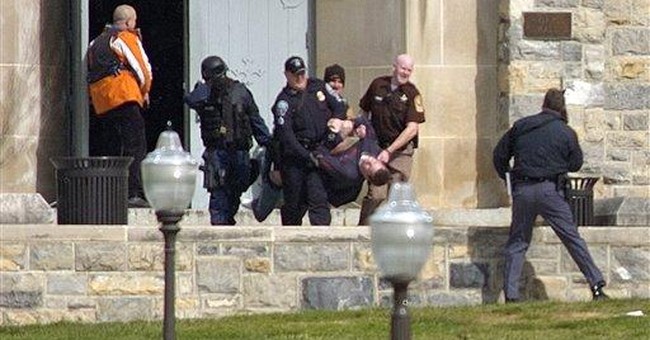 Last week, I received numerous requests for a column responding to the tragic shootings at Virginia Tech. I had almost decided against writing one when I read the following letter to the editor in the local Wilmington McTimes:

On the day of the Virginia Tech massacre, President Bush's spokesperson told the press, "… The president believes that there is a right for people to bear arms, but that all laws must be followed. …"

In effect, Bush sent this stern message to mass murderers:

We'll make sure that the weapons you need are freely available. Be warned, however, that if you shoot dozens of people before killing yourself, you will have a crime on your police record.

Since I think there’s a way to prevent tragedies like last week’s shooting at Virginia Tech, I decided to write about this topic with the hope that my good speech will help cancel out Dick Veit’s very bad speech. I suspect that many people on both ends of the political spectrum will agree with at least some things I have to say.

My view on how to alter gun laws to prevent another shooting like the one at Virginia Tech was inspired by a recent change in North Carolina gun laws. Our state decided that individuals who have a concealed carry license (CCW) do not have to obtain a pistol purchase permit in order to obtain a handgun. Instead, we are allowed to buy handguns as long as we have a valid CCW, which must be renewed every five years.

Because there are two ways to buy a handgun in North Carolina (with a CCW or with a one-time pistol purchase permit) there are two types of people who are able to buy guns; 1) Those with a CCW who have been subjected to criminal background checks, have released full medical and psychiatric records, and have taken a firearms safety course. 2) Those who obtained a purchase permit by submitting to a criminal background check, without releasing medical and psychiatric records, and without taking a firearms safety course.

At this point in the column I’m ready to unleash the first three steps in my four-step proposal for preventing mass killings on college campuses. The first two steps will not surprise my readers but the third will:

By eliminating pistol purchase permits and allowing only those of us with a CCW to purchase a handgun, there will be no more guns sold legally to those with a history of mental problems who have not yet committed their first crime. And it should be some consolation to the gun control crowd that it takes about 90 days to obtain a CCW in North Carolina. The pistol purchase permit only takes about a week

Under my plan, all legally sold guns will wind up in the hands of psychologically stable non-criminals with at least some formal training in the use of the weapon they have purchased. The liberals should like my plan so far. But they won’t like my fourth step:

Think about it for a moment. If you want to rob a bank successfully you would be wise to pick a bank across the street from a crowded university campus. After putting your gun in a backpack like most students wear, you could time the robbery so that you are done around the time classes let out. As long you make it across the street after putting your gun in the backpack you can blend together with tens of thousands of students who are also wearing backpacks.

And the best part of it – from the robber’s perspective - is that the college campus is the only large area in town where the armed robber only has to worry about the armed policeman and not the armed citizen. Under my plan, we would change the campus to a place that is more welcoming to the CCW holder than it is to the armed robber.

Our campuses need to be more than just “safe zones” for blacks, feminists, and homosexuals. They need to be zones protected by the gun-safety-educated, psychologically stable, non-criminals in our society.

I hope everyone reading this column will do his civic duty to obtain a CCW and learn how to carry responsibly. There are a lot of thoughtless Richards out there who need us to protect them.