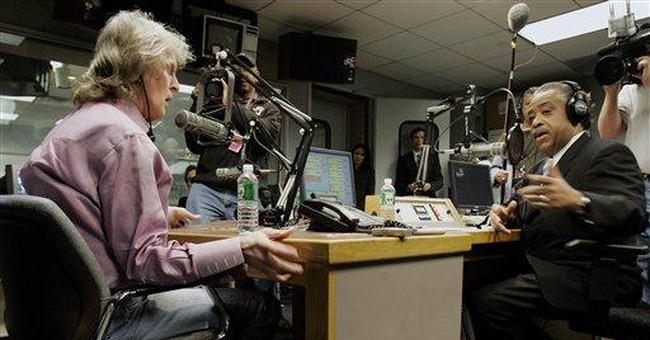 As you can see from the title of this column, I’m not too crazy about Al Sharpton. There are a number of reasons for the dislike, which has finally spilled over in light of his recent insistence on the firing of Don Imus – although, for the record, I want it known:

When the present controversy broke out, I was initially confused over which part of the phrase “nappy headed ho” had set Sharpton off. After all, two years ago at one of my speeches I was called a “Little Milky” by a Pakistani professor at Monmouth College in Illinois. Rather than calling for her to be fired, I just made fun of her in a very public way.

After finding out that a fan of mine had recorded my speech – including the “Little Milky” remark - with a digital recorder, I transcribed and published the professor’s racist comment in a column. Next, I had a student post my column on her university’s electronic bulletin board so others – including her own students! - could make fun of her, too.

But I never lost my sense of humor by slipping into a state of Sharpton-like faux outrage. In fact, I even adopted “Little Milky” as my new nickname on www.FaceBook.com. I’m not going to let the anti-white racism of this professor (whose name, by the way, is Dr. Farhat Haq, which is pronounced “Far Left Crock”) ruffle my little white tutu.

Oh, and I almost forgot the best part. Al Sharpton, whose job it is to monitor racism, never came to my defense after I was victimized by the racial epithet. In fact, Sharpton doesn’t even know who I am. But we could change that in a second if I were to simply call Dr. Haq a “Little Brownie.”

But because I am white and don’t hurl racial epithets, I’ll never meet Al Sharpton. And that’s enough for me to conclude that Al really isn’t opposed in principle to racism. He just selectively discusses it in order to get free stuff including, but not limited to, free media exposure.

So, perhaps Al Sharpton is angry about the word “ho” instead of the phrase “nappy headed.” But when I think back to the Tawana Brawley episode I quickly realize this couldn’t be so. To be dubbed a “rapist” or even a “rape victim” is far worse than to be dubbed a “ho.”

Think about it. The proper way to analyze the Brawley episode and, in the process, judge the absolute moral bankruptcy of Al Sharpton is to first imagine you have a teenage daughter or sister. Imagine further that someone had concocted a false story that she had been gang raped and sodomized by a group of adult men. Clearly, the charges would be defamatory and would cause inestimable harm to your daughter’s (or sister’s) reputation and emotional well-being.

And that is the under-discussed problem concerning the Brawley episode. We all know Sharpton defamed (and was sued by) people he falsely accused of raping and sodomizing Brawley. But look what he did to Brawley. She was merely a teenager – a child, in fact – who obviously suffered from severe emotional and mental problems. She would not claim to have been raped, sodomized, and covered with fecal matter had she been mentally stable.

So when Sharpton continued to advance the false rape story (long after it was debunked) he was still defaming Brawley. And he still is today. It is senseless to say that Brawley consented to the dissemination of the story. She hadn’t the mental or emotional capacity to do so. She was just a very sick child living in a very sick country that treats anti-Semitic/anti-Caucasian bigots with greater respect than its war heroes.

So, shame on you, racist Reverend. And, shame on you, Don Imus, for consenting to an interrogation at the hands of Al Sharpton. He might not be nappy headed. But he certainly is a whore.