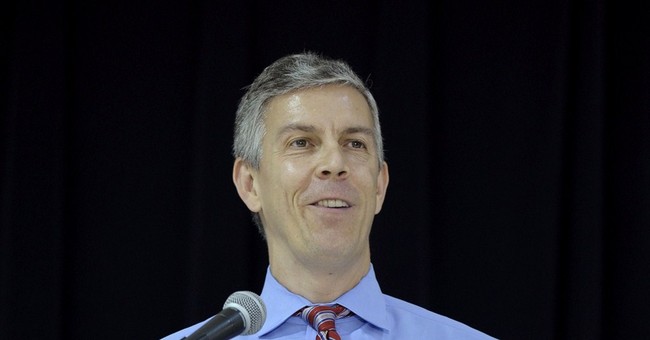 Just when you thought the Obama administration couldn't antagonize America any further, along comes Education Secretary Arne Duncan. He didn't just attack "white suburban moms" and children over their criticism of the Common Core "standards"/testing/data-mining program. The feds' top educrat also managed to insult every one of the nation's minority families and educators who oppose Fed Ed's threat to academic excellence, local control and student privacy.

On Friday, while defending the beleaguered Common Core program in a meeting with state school superintendents, Duncan unleashed a brazen race and class warfare attack on grassroots foes. As The Washington Post reported, Duncan sneered that he found it "fascinating" that the revolt came from "white suburban moms who -- all of a sudden -- their child isn't as brilliant as they thought they were, and their school isn't quite as good as they thought they were."

As a brown-skinned suburban mom opposed to Common Core, I can tell you I've personally met moms and dads of all races, ethnicities, backgrounds and parts of the country over the past year who have sacrificed to get their kids into the best schools possible. They are outraged that dumbed-down, untested federal "standards" pose an existential threat to their excellent educational arrangements -- be they public, private, religious or homeschooling.

Duncan's derision exposes the very control-freak impulses that drive Common Core. He condescendingly implies that the only reason "white suburban moms" object to Common Core is that their children are too dumb to score well on tests -- which, by the firsthand accounts of educators from urban New York City schools to rural Kentucky schools to every corner of the country, are a complete and utter mess.

Thousands of moms and dads immediately took to social media to speak truth to bigoted Fed Ed power. The nonpartisan Mothers Against Duncan (MAD) group on Facebook declared: "Secretary of Education Arne Duncan has insulted the Moms of America and our children! This MAD group is intended to be a gathering place where America's Moms can show him that he picked the WRONG group to mess with!"

Patti McKelvey wrote: "I am so angry about the latest comment out of Arne Duncan's mouth. I find it incredibly insulting. I am a clinical laboratory technologist. I have two (master's) degrees. I am a grandmother. He has stirred a real hornet's nest now -- white suburban middle-class women should not be messed with. Nor should parents of any race, creed or religion who care about their (children's) education."

Daphne Scott Yuhas posted: "I ain't white, and it doesn't matter a damn, but I am a Mom, and I am now in angry Mommy Bear mode! Watch out!"

Michigan homeschool mom Karen Braun, who signed her letter to Duncan "Your boss," ripped the tone-deaf bureaucrat: "Secretary Duncan, you and the feds may control the purse strings, but WE (moms of every color and location) control our 'brilliant' children's shoe strings. We have the final authority, and we're saying no to your 'higher standard' and your high stakes tests... YOU work for US! Get that right, and you and the mothers of America will get along a whole lot better."

Duncan now says his dog-whistle tirade was clumsily worded. But he's used the same talking points before. What's crystal clear is that Duncan and his top-down dictators presume that only technocratic elites in Washington can determine what quality standards and curricula look like. He pretends that minority parents and students in inner-city charter and magnet schools with rigorous locally crafted classical education missions simply don't exist. A textbook liberal racist, Duncan whitewashes all minority parents and educators who oppose Common Core out of the debate.

This is a White House war on uppity women and children of all colors. Duncan's a bigot, a bully, an elitist and a foot-in-mouth fool all rolled into one -- and he continues to enjoy the support of the president. The relentless Beltway attacks on Common Core critics also give lie to the oft-repeated claim that the top-down initiative was "state-led" and grassroots. It should not go unnoticed that the most vocal and defensive advocates of the beleaguered Fed Ed boondoggle are not local teachers or parents, but pale-faced Beltway bureaucrats and their corporate allies.