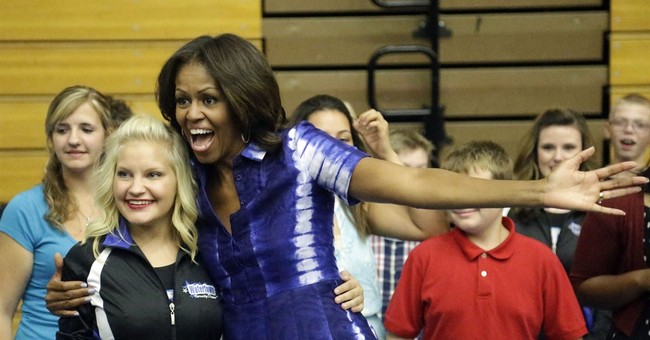 Trending
While her husband's signature health care law goes up in flames, first lady Michelle Obama is reveling in the success of her East Wing pet project, the "Let's Move" initiative. But ignore the do-gooder dressing. Mrs. Obama doesn't care about your children. What we have here is a textbook case of Washington influence peddling, which the Obamas so vigorously condemned a long time ago and far away.

On Wednesday, Mrs. Obama announced an agreement by the Sesame Workshop and the Produce Marketing Association (PMA) to join her nonprofit Partnership for a Healthier America (PHA) in a two-year agreement to help promote fresh fruit and vegetable consumption to kids. Among the corporate interests Mrs. Obama has wooed to her cause: Wal-Mart, Nike, Reebok, Nickelodeon, Walt Disney and the administration's former Public Enemy No. 1, the U.S. Chamber of Commerce.

Politico.com notes that trade groups including the American Beverage Association, the International Bottled Water Association, the Food Marketing Institute, the Grocery Manufacturers Association and the National Restaurant Association are all working with the first lady behind closed doors.

Mrs. Obama's nonprofit reportedly has assets of $4.5 million. It doesn't have to disclose its donors. So much for the "most transparent administration ever." Even left-wing watchdogs are irked. "This is a classic case of the game of influence peddling by lobbying associations," Craig Holman, who works for the liberal watchdog group Public Citizen, told Politico.com. "Lobbyists and corporations with business pending before the federal government invest in such charitable causes as a means to buy access and favor from the White House."

In 2008, candidate Obama preached: "We need a president who will look out for the interests of hardworking families, not just their big campaign donors and corporate allies." In 2013, first lady Michelle Obama is busy signing up as many corporate allies as she can.

As I've reported previously, Mrs. Obama has profited handsomely from the very same processed food industry she now demonizes. In June 2005, a few months after her husband was elected to the U.S. Senate, Mrs. Obama was named to the corporate Board of Directors of TreeHouse Foods, Inc.

Despite zero experience, the food-processing company put her on its audit and nominating and corporate governance committees. For her on-the-job training and the privilege of putting her name and face on their literature, the company forked over $45,000 in 2005 and $51,200 in 2006 to Mrs. Obama -- as well as 7,500 TreeHouse stock options worth more than $72,000 for each year. TreeHouse, a leading supplier to Wal-Mart, sells cheese sauces, Cremora non-dairy creamer, instant soup, puddings and powdered soft drink mixes, and pickles for McDonald's. Eat as she says, not as she deals.

Mrs. Obama has moved on from TreeHouse to much fatter "partnerships." The alliances between big business and big government, marketed as a public service "for the children," have been a bonanza for the first crony. They scratch her back, her clout and popularity increase, and she'll have a cornucopia of board of director slots to choose from after her hubby's term is up. Make no mistake: Michelle's fruits and vegetables are served on a heaping platter of progressive hypocrisy.