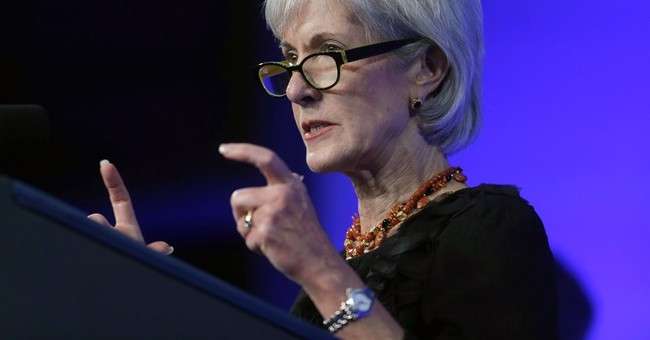 Trending
U.S. Secretary of Health and Human Services Kathleen Sebelius is allergic to the truth. She is the ruthless enforcer of Obamacare's Jenga tower of lies upon lies upon lies. Now that this fatally flawed government edifice is collapsing, you can expect Sebelius to do what she has done her entire career: blame, bully and pile on more lies.

Three years ago, when insurers and other companies had the audacity to expose Obamacare's damage to their customers and workers, Sebelius brought out her brass knuckles. Remember? As I reported at the time, the White House coordinated a demonization campaign against Anthem Blue Cross in California for raising rates because of the new mandate's costs. Obama singled out the company in a "60 Minutes" interview, and Sebelius sent a nasty-gram demanding that Anthem "justify" its rate hikes to the federal government.

A private company trying to survive in the marketplace was forced to "explain" itself to federal bureaucrats and career politicians who have never run a business (successful or otherwise) in their lives. Sebelius went even further. She called on Anthem to provide public disclosure of how the rate increases would be spent -- a mandate that no other private companies must follow.

In an even more heavy-handed effort to suppress criticism, Sebelius wrote America's Health Insurance Plans (AHIP), the national association of health insurers, "calling on their members to stop using scare tactics and misinformation to falsely blame premium increases for 2011 on the patient protections in the Affordable Care Act." The threatening cease-and-desist letter commanded: "I urge you to inform your members that there will be zero tolerance for this type of misinformation and unjustified rate increases. ... Simply stated, we will not stand idly by as insurers blame their premium hikes and increased profits on the requirement that they provide consumers with basic protections."

The speech-stifling gag order declared war on every opponent of Obamacare who dared to question the administration's phony claims of cost-savings or expanded access. When McDonald's notified the feds that it might have to cancel health insurance plans for 30,000 workers because of Obamacare's effective prohibition on low-cost plans, Sebelius slammed The Wall Street Journal for reporting the story. She then rushed to issue McDonald's an Obamacare waiver, the first of thousands to quell criticism and bleeding.

Health care policy analyst Merrill Matthews points out that Sebelius cracked her whip against health insurer Humana even before the law had passed. When the insurer warned seniors that an Obamacare proposal to cut reimbursements could harm their Medicare Advantage benefits and coverage, Sebelius demanded that the company "suspend potentially misleading mailings to beneficiaries about health care and insurance reform."

Sebelius' power-mad partner on Capitol Hill, Henry Waxman, targeted companies including Deere, Caterpillar, Verizon and ATT in a brass-knuckled effort to silence companies speaking out about the cost implications and financial burdens of Obamacare. After the firms reported write-downs related to the Obamacare mandate (disclosures that are required by law), Waxman scheduled an inquisition hearing to berate them publicly. After the Democrats' own congressional staff pointed out that the companies "acted properly and in accordance with accounting standards" in submitting filings that were required by law, Waxman called off the hounds.

It was a temporary reprieve. Caught with their pants down on the Obamacare website abomination and unable to stifle the cries of millions of Americans who are unable to keep the plans and doctors they like, Sebelius and her corrupt company are now blaming insurers, contractors and customers for the Obama administration's ideological mess. In short: They lied, but for your own good. Culture of Corruption 101.