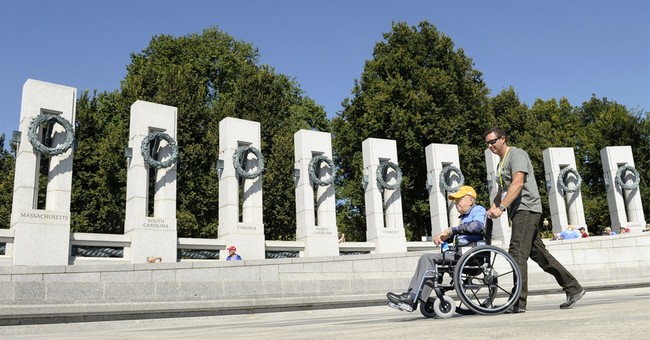 Could this be the end of Monument Syndrome? Across the country, ordinary Americans are rising up in revolt against the old Washington tactic of closing public parks and memorials during selective government "shutdowns" to score political points. Tax-paying tourists are tossing off the orange traffic cones and "Barrycades." Enough is enough.

The movement started with waves of World War II veterans who flew to D.C. last week as part of the Honor Flight Network. (The nonprofit group brings our surviving heroes to visit the memorials that honor their service and sacrifice.) The vets and volunteers breached the fences last week, exposing the tone-deaf tactics of President Obama's Spite House. Honor Flight visits continue this week, and more vets vowed to defy the cynical closures.

They are not alone. At Gettysburg National Military Park, tourists broke through barriers and posed for pictures on the battlefields with notes reading, "Catch us if you can." One visitor reported that motorists formed impromptu caravans as rangers chased them. "Strength in numbers," they tweeted.

At Mount Rushmore and in the Badlands of South Dakota, families barreled over hazard cones. Their photos went viral on Facebook. In Wisconsin, GOP Gov. Scott Walker defied the National Park Service and opened state parks that Obama-crats wanted closed because they receive some federal dollars. At the Mingo National Wildlife Refuge in southeast Missouri, a group of 20 protesters defied threats of arrest to enter the park.

"This is to get some knowledge out there that the federal government has its fingers in everything, including our own land in our own states, and, out of spite, they'll shut it all down," Jackson resident Brian Bollmann told the local press.

In Michigan, tourists crossed police-style yellow tape and construction barrels to get to Munising Falls in the Pictured Rocks National Lakeshore. Twitter users posted photos of the broken barriers over the weekend. The Mining Journal reported on one visitor who simply stepped over the tape: "'Well, that worked, huh?' she asked rhetorically." Take that, manipulative federal overlords.

At Zion National Park in Utah, hikers scaled the fences and wondered why so many supposedly furloughed workers were working to keep them out. One visitor, highlighted at my Twitter aggregator Twitchy.com, described her experience to me last week at the scenic tourist spot:

"(W)e were advised by the park ranger at the gate that we couldn't stop our car at any time in the next 12 miles. To ensure that we didn't pull over at any of the scenic viewpoints, cones were placed at every turnoff. That didn't stop people, however, as many were getting out, moving cones and quickly taking pictures. People were incredulous at that restriction, as if they could somehow shut down our ability to enjoy our surroundings. ... I did enjoy seeing an elderly couple, in a display of civil disobedience, leave their car and walk hand in hand on the red rock."

Welcome to Occupy America. It's a protest movement for all ages against Washington business as usual. Thanks to social media, citizens outside the Beltway are now able to voice their disgust in an unprecedented way. Through Twitter, Facebook and blogs, they are directly disrupting the well-worn politics of government parks-and-wreck extortion.

From closing down parts of the ocean around Florida to booting elderly citizens from their private homes on Lake Mead to shutting down private restaurants and farms that just happen to sit on federal land, the Democrats' overreach has finally backfired.

The explanation for this ridiculous Obama obstructionism can be summed up in one word: Control. Control of the people. Control of the partisan narrative. Monument Syndrome, perfected under the Clinton administration, is about inflicting the most visible pain on citizens to demonize political opponents. Big-government advocates in the media enabled the manipulators.

For decades, taxpayers were passive pawns in this gamesmanship. No more. Monument Syndrome, R.I.P.