How Oberlin Manufactured the Hate-Crime Hoax of the Year 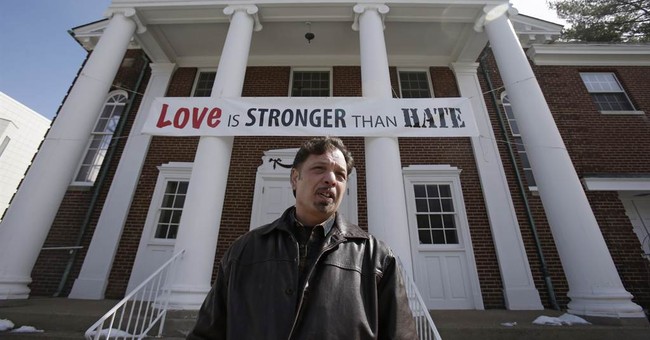 Busted. Stone-cold busted. Just as I suspected, "progressive" pranksters at Oberlin College have been definitively unmasked as the perpetrators of phony campus "hate crimes" that scored international headlines in March. The blabbermouth academic administrators who helped fuel the hysteria are now running for cover.

The Associated Press, The New York Times, MSNBC, Yahoo News and the Huffington Post were among the media outlets that trumpeted the story of supposed racism, homophobia and anti-Semitism run amok at my alma mater. Throughout the winter, anti-black and anti-gay graffiti, swastikas, and a shadowy figure in a "KKK hood" surfaced on the tiny campus outside Cleveland, Ohio. Black Entertainment Television News decried the hate outbreaks and "KKK sighting."

Because of my firsthand knowledge of Oberlin's long history of self-manufactured hate-crime incidents, the fake-hate-crime alarm bells went off immediately for me when I read the reports. Back in the 1990s, race-obsessed nutballs at Oberlin College cooked up a horrid hate-crime hoax. Asian-American students claimed that a phantom racist had spray-painted anti-Asian racial epithets on a campus landmark rock. It turned out that it was a warped Asian-American student who perpetrated the dirty deed.

Student newspapers were filled with complaints about imaginary racism. One Asian-American student accused a library worker of racism after the poor staffer asked the grievance-mongering student to lower the blinds where she was studying. A black student accused an ice-cream shop owner of racism after he told the student she was not allowed to sit at an outside table because she hadn't purchased any items from his store.

My suspicions about the latest "hate" crime were bolstered by police statements that the "KKK hood"-wearing menace was actually a female student wrapped in a blanket. Hollywood darling and Oberlin alumnus Lena Dunham was undaunted, however, in ginning up emotional calls for Obie solidarity on Twitter, which the AP dutifully reported as "news." My warnings and reports on previous Obie hoaxes, alas, were not deemed AP-newsworthy.

And now, the rest of the story. According to police reports published by Chuck Ross of The Daily Caller News Foundation this week, two students had 'fessed up to most of the incidents (and fellow students suspect they are responsible for all of them). The Oberlin Police Department identified the hoaxers as Dylan Bleier (a student worker bee for President Obama's Organizing for Action and a member of the Oberlin College Democrats) and Matthew Alden. Bleier told police the pair posted inflammatory signs and a Nazi flag around campus to "joke" and "troll" their peers.

Investigators "caught them red-handed" trying to circulate anti-Muslim fliers, and a search of Bleier's email confirmed he had used a fake account to harass a female student. Cops told Oberlin President Marvin Krislov, but he failed to pursue any criminal action. The two students were removed from campus before the bogus "KKK" brouhaha and news-making shutdown.

Krislov not only remained silent about the two pranksters, but he also stoked the fires of political correctness and helped fuel the false notion that real bigotry had pervaded the campus. The spring edition of the Oberlin College alumni magazine opened with a self-congratulatory essay from Krislov titled "A Fitting Response."

After perversely bragging about the "national and international news" headlines on the "bias incidents (that) disrupted our campus community," Krislov clucked that "similar things have occurred at other colleges." Which, of course, is inadvertently true. As I've reported for 20 years, American college campuses are the most fertile grounds for fake hate.

Krislov then praised "students, faculty, staff, alumni and fellow Oberlin residents" who "turned hate into an opportunity to educate." Of course, "hate" had nothing to do with it. And the police reports suggest that Krislov knew it. The rash of "intolerance" that littered the Oberlin campus was a symptom of juvenile delinquency and perverse self-delusion. Instead of examining their guilt in coddling hate-crime hoaxers, Krislov giddily promoted new efforts "strengthening the emphasis on diversity."

There are other adults who deserve to be called out. As Cornell law professor and blogger William Jacobson, who has pressed the administration for months about the cover-up, notes: "Oberlin continues the wall of silence which delayed for months disclosure of the hoax. It's time for Oberlin to reveal who knew what, and when, particularly as to the oversight exercised by the Board of Trustees."

Sad to say, this is the sorry state of liberal arts colleges in America today: Extreme identity politics, multiculturalism and pedagogical self-indulgence are creating a generation of race trolls enabled by tenured cultural Marxist punks raking in beaucoup bucks. The bursting of the higher-ed bubble can't come fast enough.