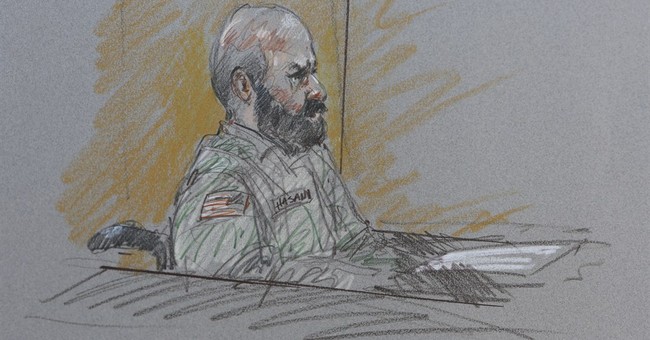 Finally. Four years after Maj. Nidal Malik Hasan walked into the Soldier Readiness Processing Center at Fort Hood, Texas, and perpetrated the bloodiest massacre ever on an American military base, the self-confessed jihadist's court martial proceedings began this week. Have you forgotten?

Americans obsessed over the O.J. Simpson, Casey Anthony and Jodi Arias trials. Gun-control lobbyists turned Newtown, Aurora and Tucson into national awareness-raising, fundraising and legislation-promoting campaigns. But where are the celebrity lobbyists and high-profile advocates for the victims of bloodthirsty Muslim vigilante Nidal Hasan?

--Fourteen victims fell on Nov. 5, 2009, not 13. Thirteen of our U.S. military personnel died in cold blood at the deployment center. But the death toll was actually 14. Pvt. Francheska Velez, 21, was pregnant when Hasan shot her during the first round of gunfire. At a military Article 32 hearing in 2010 (analogous to a civilian grand jury hearing), a survivor of the Fort Hood shootings testified that Velez cried out, "My baby! My baby!"

In his opening statement on Tuesday, Hasan (acting as his own lawyer) apologized to his fellow jihadists for not destroying more innocent life.

--The victims were all unarmed. Soldiers inside the deployment center were and are forbidden from carrying weapons -- either issued weapons or personal arms -- on base. When Hasan commenced his shooting spree by shouting, "Allahu Akbar," several brave men and women in uniform used chairs, tables and their own bodies to try to stop him. But it wasn't until a courageous, armed civilian police officer, Sgt. Kimberley Munley, arrived on the scene with her 9mm Beretta that Hasan's rampage was interrupted.

In a gunfight outside the deployment center, Munley wounded Hasan -- who was able to return fire and shot her in the hand, thigh and knee. While she lay on the ground, Hasan kicked away her weapon. Another armed civilian police officer, Mark Todd, was able to fire at Hasan five times and brought him down.

Gun-control zealots led by the Brady Campaign To Prevent Gun Violence exploited Fort Hood to argue for even tighter gun restrictions. But it was a 1993 Clinton administration gun-control directive banning most military personnel from carrying their arms for personal protection that facilitated Hasan's massacre except under very limited circumstances. Despite the death of 13 soldiers and the wounding of more than 30 at Fort Hood by a jihadist who warned his superiors that Muslim soldiers posed a specific threat, gun-free military base policies remain in place.

--Hasan's military colleagues were more concerned with being accused of discrimination than with ridding our military of this known, deranged Islamic radical. In 2007, two years before he carried out his homicidal plan, Hasan laid out his murderous means, motives and Koranic inspiration for all to see.

His PowerPoint slide presentation to fellow Army doctors was titled: "The Koranic World View As It Relates to Muslims in the U.S. Military." Hasan warned: "It's getting harder and harder for Muslims in the service to morally justify being in a military that seems constantly engaged against fellow Muslims." And: "We love death more then (sic) you love life!" As first reported by Pamela Geller, Hasan carried an official calling card with the designation "SoA (SWT)" -- for "Soldier of Allah" and "Subhanahu Wa Ta'ala" (Islamic for "Glory to Him, the Exalted").

Hasan told his superiors he was not alone among Muslim soldiers who believed they "should not serve in any capacity that renders them at risk to hurting/killing believers unjustly."

He reminded the Army of the fatal 2003 fragging attack on American soldiers in Kuwait by Sgt. Hasan Akbar (who was sentenced to death but remains alive while his case drags on in appeal) and the desertion case of Lebanon-born Muslim Marine Wassef Ali Hassoun.

A Joint Terrorism Task Force had been monitoring Hasan's communications with jihad spiritual leader Anwar al-Awlaki all along. But the military was not notified. Even without that information, military officers expressed concerns privately that Hasan might leak classified information to terror groups if he were deployed and that he was capable of committing a fragging.

Yet, they were prepared to deploy him anyway and did nothing to remove him from his job. One email from an Army investigator before the Fort Hood massacre fretted: "Had we launched an investigation of Hasan we'd have been crucified."

Instead, 13 soldiers and one unborn child were slaughtered and paid with their lives for our country's reckless political correctness and bureaucratic fecklessness.