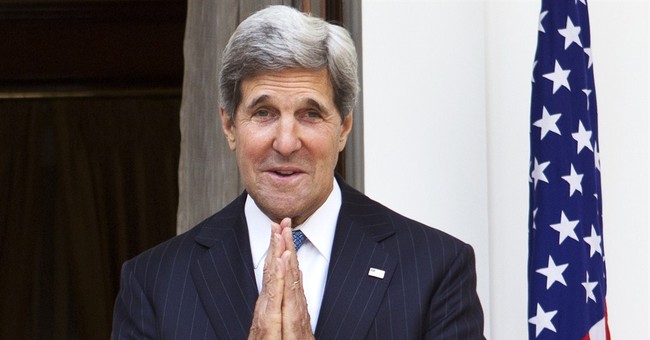 Trending
Forget Paula Deen. There are far more dangerous bigots and poisonous haters spoiling the American landscape. They cook up violent rhetoric and murderous plots against our troops, our citizens and our allies 24/7. And they have direct access to the White House.

Earlier this week, the indefatigable Investigative Project on Terrorism blew the whistle on the Obama administration's latest flirtation with Muslim jihad. Sheikh Abdullah bin Bayyah bragged on his website that he had met with Team Obama on June 13. IPT reported that bin Bayyah was invited by National Security Council official Gayle Smith "to learn from you and we need to be looking for new mechanisms to communicate with you and the Association of Muslim Scholars."

Someone associated with bin Bayyah deleted his website reference to the meeting, but the Internet is forever. The White House has now 'fessed up to the confab. According to Fox News, a senior official spun the troubling event as a discussion about "poverty, global health efforts and bin Bayyah's own efforts to speak out against al-Qaida."

Bin Bayyah's moderate Muslim costume shouldn't fool anyone. This sharia thug, who has worked with the Bill and Melinda Gates Foundation to boost his progressive-friendly cred, lobbied the United Nations to outlaw all mockery and criticism of Allah. He raised money to benefit the terror group Hamas. He is a top lieutenant of Muslim Brotherhood spiritual leader Yusuf Qaradawi, who exhorts followers to kill every last Jew; sanctioned suicide bombings and the killing of our soldiers; expressed support for executing apostates and stoning gays; and declared that the "U.S. is an enemy of Islam that has already declared war on Islam under the disguise of war on terrorism and provides Israel with unlimited support."

As jihad watchdogs have reported, the administration has rolled out the red carpet for dozens of Muslim Brotherhood officers, flacks and sympathizers. IPT noted last year: "White House visitor logs show that top U.S. policy-makers are soliciting and receiving advice from people who, at best, view the war on terrorism as an unchecked war on Muslims. These persons' perspectives and preferred policies handcuff law enforcement and weaken our resolve when it comes to confronting terrorism."

No kidding. Another Qaradawi cheerleader, Hisham al-Talib, was welcomed last spring at the White House by Obama's Office of Faith-Based and Neighborhood Partnerships. Four days later, White House officials welcomed a foreign delegation of the radical sharia-enforcing Muslim Brotherhood from Egypt. As I reported previously, al-Talib is an Iraqi-born Muslim identified by the FBI as a Muslim Brotherhood operative and a major contributor to the left-wing Center for Constitutional Rights, the group of jihadi-sympathizing lawyers who helped spring suspected Benghazi terror plotter Abu Sufian bin Qumu from Gitmo.

Al-Talib is also a founding member of the SAAR Foundation and the International Institute of Islamic Thought (IIIT). FBI and Customs officials believe SAAR/SAFA laundered money for a plethora of violent Muslim terrorist groups, from Hamas and Hezbollah to al-Qaida and the Palestinian Islamic Jihad. Investigative journalist Patrick Poole reported recently that the Obama DOJ dropped planned prosecutions of IIIT leaders including al-Talib, despite being "targeted and repeatedly named in the 2003 U.S. Customs Service search warrant application by Customs Agent David Kane targeting the SAAR Foundation/SAFA Group terror finance network."

We need a zero tolerance policy for jihadist infiltrators and coddlers in Washington. Let's make the most transparent administration ever live up to the hype. I suggest the White House be required to raise the black flag of Islamic jihad at 1600 Pennsylvania Avenue every time President Obama welcomes these treacherous visitors.

Even better: Let's take a page from Kanye West and project the names of all the Ikhwan-linked goons who are allowed to darken the White House doorstep onto the side of the Old Executive Office Building for all to see -- along with their most infamous hate videos and fatwas against Jews, infidels, gays, women and U.S. soldiers. No more play dates with Muslim jihad behind closed doors. Light 'em up.