The Amnesty Mob vs. America 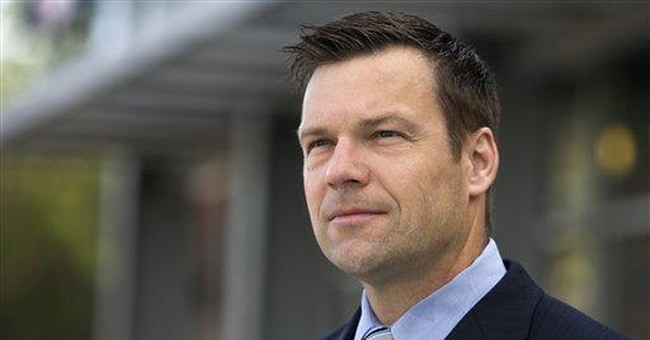 You can try to put "conservative" lipstick on the lawless amnesty mob. In the end, however, it's still a lawless mob. The big government/big business alliance to protect illegal immigration got a lot of mileage using foolish Republicans Marco Rubio and Paul Ryan as front men. But the true colors of the open-borders grievance-mongers always show through.

After America said no to a pork-filled security-undermining amnesty bill in 2007, the No Illegal Alien Left Behind lobbyists changed their overtly thuggish tactics. They put down their upside-down American flags, stopped wearing their commie Che Guevara T-shirts and cloaked their radical "Aztlan" aspirations in the less divisive rhetoric of "reform" and "opportunity."

It was all just an act, of course. Inevitably, the mask has slipped. Over the weekend, illegal alien protesters descended on the private residence of Kansas Secretary of State and immigration enforcement lawyer Kris Kobach. As Twitchy.com reported on Saturday, 300 amnesty activists marched into Kobach's neighborhood and barged up his driveway and right onto his doorstep. It's how the Alinskyite "community organizers" roll.

Shouting into a bullhorn and waving their fists from his front porch, the property rights-invaders dubbed Kobach "King of Hate" for his work representing border security activists and federal customs enforcement agents who are fighting the systemic sabotage of immigration law. Thankfully, Kobach, his wife and their four young daughters were not home at the time.

But the aggrieved amnesty demanders are not done yet. And Kobach is not the only one in their crosshairs.

After tea party activist turned Kansas state representative Amanda Grosserode condemned the mob action publicly on Facebook, racist insults and threats littered her page. Roberto Medina Ramirez wrote: "I'll give her something to be disgusted about!" Doris Lynn Crouse Gent chimed in: "OMG! Maybe her drive should be next." Matt S. Bashaw echoed the call: "Maybe her house should be next." Facebook user Jude Robinson also ranted on Grosserode's page: "Since Kobach steals taxpayer money spreading hate around the country, he deserves what he gets."

Dennis Paul Romero left this message for Grosserode: "(N)azi kkk and she is proud of it." A user writing as "Paul-says Fckmarkzuck" left death threats under Romero's comment: "Gotta start killing all the Nazis. Politicans (sic), bankers, and priests. Cops, lawyers, and Judges. ASAP." The same user added: "Just another b*tch that needs to die off already."

Gina Long pounced: "(S)he is stupid and doesn't like brown people." So did Diana Bauer: "Ah, poor Ms Grosserode; sorry that you find our Constitution so difficult to stomach. Or is it only whites that have the right to freedom of speech." One Lupe Ramirez left his own message for Grosserode: "We are starting our fundraising and campaign to unseat you. Do you not realize how many Hispanics are in Kansas. You no longer live in Dorothy's Kansas. You cannot represent your state, you don't even know who they are."

Grosserode isn't backing down. She told me Tuesday that she will remain "vigilant" and has given local law enforcement a heads-up. The conservative mom and lawmaker notes sadly that "there are some who would say that when you are in elected office that you should expect this kind of thing. I would disagree. No one deserves threats nor threats to their home and family."

As they besiege Capitol Hill this month demanding more rights and payoffs, take note: These groups do not stand for the American dream. They are a nightmare conglomeration of George Soros-funded social justice operatives, transnationalists and La Raza militants who detest U.S. sovereignty. National People's Action, which spearheads progressive "direct actions" at the private homes of their political foes and led the march on Kobach's home, is a "community organizing" nonprofit based in -- you guessed it -- Chicago.

NPA's past shakedowns have involved busing in protesters and schoolchildren (using public school buses) to invade the private property of their victims and intimidate their families. They relish their brass knuckles with this anthem:

Take no prisoner, take no names.

As I first reported in 2004, NPA is funded by the Tides Foundation, the Ben and Jerry's Foundation, and the MacArthur, Ford and Rockefeller foundations. It's also funded by your tax dollars. My research found that the Department of Housing and Urban Development, the Environmental Protection Agency and the Massachusetts Department of Education had all given tens of thousands of dollars in grants to NPA members for left-wing activism, identity politics and illegal alien benefits.

Rubio, Ryan and other Republicans who've made common cause with these welfare-state goons have betrayed fundamental principles of limited government and the rule of law. They've allied themselves with the mob. There's nothing, not one thing, "conservative" about mass illegal alien amnesty. It's the complete Chicago-ization of America.