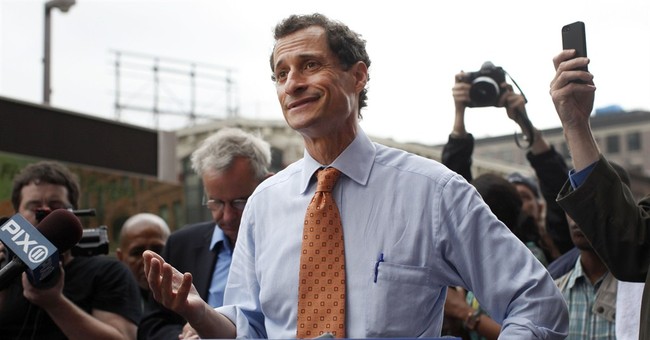 Touchy, touchy. Despite Team Anthony Weiner's best efforts at political rehabilitation, there's just no way to shore up his sorest scandal spot. As the New York Post reported this week, Weiner had a bit of a snit fit when a local Democratic official boldly slammed his sexting habits with underage girls.

Chris Owens, the Dems' state committee member in northwest Brooklyn, called out the skeezy ex-congressman at a mayoral candidate forum. "I am outraged and disgusted by you," Owens told Weiner. "Both by what you did and by the fact that you have the arrogance to run for mayor. I want to understand how you explain to us how you used a public facility to tweet offensive material to ... minors you did not know, you then lied about it ... and now you come back."

The hubristic horn-dog bared his teeth, got "snippy" and responded by snarling defensively that he's "going to win this election and I'm going to govern this city really well."

Don't get ahead of yourself there, Tweety Boy. If more rank-and-file Democrats join Owens in focusing like a laser on Weiner's underage-girl problem instead of soft-pedaling his "past issues" as "consensual" "online dalliances," Icky-rus will fall again.

Weiner's puff-piece enablers at The New York Times have done their best to downplay the scandal's sordid pedo angle. He's just a luvin' hubby and conscientious dad who came clean about a momentary lapse in social media judgment. And he accepts responsibility, dontcha know? No crime, no foul, right?

Not quite. All the celebutante fashion photo shoots with wife Huma Abedin can't insulate Weiner from the truly trashy truth. Remember: Democratic women on Capitol Hill stood by Weiner and his Twitter tawdriness until a critical moment almost exactly two years ago this week: It was the moment news broke that among the bevy of online groupies he hit on, Weiner had communicated with at least one teenage high school student in Delaware.

Weiner had flirted with the underage girl through Twitter direct messages using a macho line about donning "cape and tights" -- a quip he had also used with an adult woman with whom he had exchanged raunchier sexually explicit messages. Conservative blogger Patrick Frey (patterico.com) first uncovered the evidence. Fox News then broke the news in the mainstream press that Delaware police had visited the girl's home and questioned her about her online communications with Weiner. The 17-year-old said she had met Weiner on a school trip to Washington.

At his watershed press conference circus on June 6, 2011, Weiner claimed he "never had an intention of having a relationship with underage women" and blustered that the girls he communicated with "weren't young, per se." Per se? Just a few days later, Weiner was forced to admit that he had exchanged "at least five private messages on Twitter" with the Delaware girl, not two messages as initially reported. He also denied that any messages to the teen were "explicit" or "indecent."

But can the serial liar be believed? Over the past several weeks as he has attempted to "move past" the past, Weiner has admitted that more creepoid photos or messages may surface. He told WNYC: "People may decide they want to come forward and say, here's another email that I got or another photo. I'm certainly not going to do that. So people may hear things that are true, they may hear things that are not true, but I'm going to try to keep being focused on issues that are important to New York City."

Silly me, but perhaps the predatory perv behavior of one of the Big Apple's leading mayoral candidates should be an issue of concern. As I pointed out when the late, great Andrew Breitbart broke Weinergate wide open two years ago, stories about Weiner's hot pursuits of young Capitol Hill interns date back to 2001. At least one young woman told liberal Vanity Fair magazine that Weiner hunted down her email address, bragged about riding on Air Force One and extended an invitation to visit his office in person.

Trolling habits die hard. And all the sex therapy in the world can't cure pathological skeeviness. The man who wants to be New York's mayor was willing to blame truth-seeker Breitbart for "hacking" into his rancid social media accounts. He was willing to mislead his lifelong Democratic pals and enlist them in his phony smear conspiracy to cover his lurid macking tracks.

This is not merely a "private matter." It's about public fitness for office. Anthony Weiner thinks he should be put back in political power because he effectively champions "middle-class" values. Middle-class New Yorkers who value decency, honesty and safe work and online environments for your young daughters, speak now or forever hold your peace.

Matt Vespa
What Is Wrong with Eric Swalwell?