Who's Tracking Your Children? 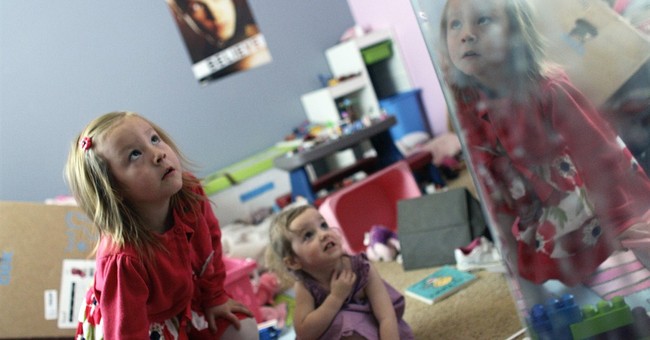 Trending
The school year may be over for most American students, but parents must remain as vigilant as ever when it comes to protecting their children's privacy. Look no further than the shocking, invasive conduct of the Polk County, Fla., educational district last week. It's a surveillance-state sign of the times.

Two days before their Memorial Day weekend break, kids from at least three different public schools -- Bethune Academy (K-5), Davenport School of the Arts (K-5, middle and high school), and Daniel Jenkins Academy (6-12) -- were subjected to iris scans without their parents' knowledge or consent. The scans are essentially optical fingerprints, which the school intended to collect to create a database of biometric information for school bus security.

One mother took to Facebook to decry the outrageous breach after her son informed her of the unauthorized imaging. She posted a face-saving letter from Polk County Senior Director of Support Services Rob Davis notifying families only after the high-definition eye scans had been conducted.

The mom, April Serrano of Kissimmee, Fla., recounted: "I have been in touch with the principal at my son's school this morning regarding the iris scans. She verified everything my son told me. ... She said that she was following instructions from the Polk County School Board (PCSB), and that she knew very little, if anything, about this before it occurred. She just did as she was told."

The principal "did as she was told," no questions asked, just like a compliant servant of Big Brother is expected to do. Thank goodness for whistle-blowing parents unafraid to speak truth to mind-numbed power.

I phoned Davis, the school bureaucrat who oversaw the intrusive iris scan initiative, on Wednesday after education reform activists spread the word about Serrano's protest across social media. He confirmed to me that the Orwellian incident indeed took place. Davis sheepishly admitted that it was "a mistake on our part" that a notification letter to parents did not go out earlier in the month. He then blamed a secretary who had a "medical emergency" for the administrative mishap.

But this was far more than an innocent clerical error. Instead of verifying that parents received the letter and ensuring that any families who wanted to opt out had a chance to so, the schools allowed officials from Stanley Convergent Security Solutions into the schools to take iris scans of an unknown number of students as part of a "pilot" security tracking program for students who ride the bus. Stanley operates "identity management" systems using "Eyelock biometric readers" that "ensure maximum convenience with unprecedented accuracy."

The participating Polk County schools were all notified, but somehow the parents of students who ride on a total of 17 school buses to the three schools were all left in the dark. In addition, the district had planned to conduct a pilot scan program with another security company, Blinkspot.

Davis says all of the data have been destroyed. So has the trust parents had in these negligent educrats violating family privacy in the name of "safety." Parents have asked the school board for proof that the records have been wiped. Unsurprisingly, school officials have clammed up now that they are under public scrutiny.

"I am outraged and sickened by this blatant disregard for my son's constitutional right to privacy and my parental rights over my son," Serrano told me this week. Another affected mom, Connie Turlington, also publicly challenged the school district on local TV station WFLA: "This is a fingerprint of my child. Where does this information live? Who has a hold of it? ... My question is: How is it deleted, and how can we be assured as parents that it's gone?"

These parents are not alone. School districts across the country are contracting with private tracking firms to monitor students. Some are using radio frequency tracking technology (RFID) to log movements. Khaliah Barnes, the open government counsel with the Washington, D.C.-based Electronic Privacy Information Center (EPIC), spelled out the chilling implications for freedom of speech, religion and association in a recent CBN interview: "Imagine for example a student being dissuaded from attending a political interest group because she fears that the tracking technology will alert the principal or other administrators where her political affiliations lie."

The data will be available to a wide variety of public agencies. And despite federal student-privacy protections guaranteed by the Family Educational Rights and Privacy Act, the Obama administration is paving the way for private entities to buy their way into the data boondoggle. EPIC is now suing the federal Department of Education over its regulatory sabotage of privacy protections.

Those who scoff at us "paranoid" parents for pushing back at Big Brother in the classroom suffer from an abject failure of imagination about government tyranny. Control freaks in public education understand all too well: The hand that tracks our children rules the world.