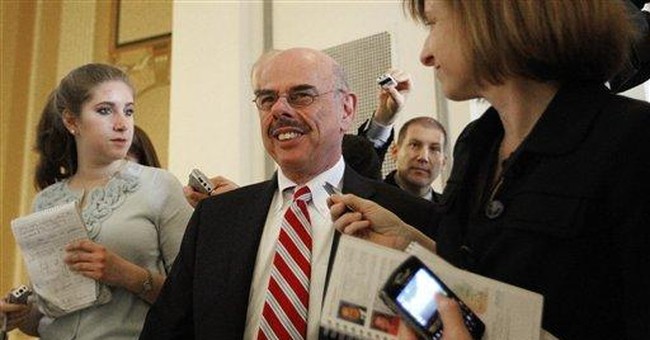 Has there ever been a time when 18-term liberal Democratic Rep. Henry Waxman's nostrils weren't flaring indignantly at corporate executives and entrepreneurs? The man wields his gavel over the free market like a Damoclean sword. He throws the weight of his congressional chairmanship around like a sumo wrestler walking across hot stones. For more than 35 years, Waxman has made it his taxpayer-funded business to use the power of government to undermine private business.

No one should be surprised by his latest thuggish efforts to silence companies speaking out about the cost implications and financial burdens of Demcare -- least of all, those companies.

This is the Eliot Ness-wannabe who serves proudly as the left's chief inquisitor. This is the Capitol Hill haranguer who herded tobacco company CEOs in front of the cameras, made them raise their right hands and cackled as he forced them to testify under oath about the evils of their products. Waxman's demagoguery then was so over the top that it prompted Washington Post columnist William Raspberry to write that the "Capitol Hill inquisition masquerading as legislative hearings reminds me of nothing so much as a witch-hunting Joe McCarthy."

Last month, Waxman stacked the deck at the Toyota inquisition hearing with auto industry-bashing Naderites. In 2007, he held court over the Valerie Plame show trial. And in February 2008, he wasted four hours on a nationally televised interrogation of baseball legend Roger Clemens and his trainer. Republicans called Waxman out on his Captain Queeg-ish vendetta against Clemens. The debacle was dubbed a "Roman Circus." After squandering public resources on congressional showboating over steroid use, Waxman himself confessed that he "didn't think it was a hearing that needed to be held."

When he isn't abusing the deliberative process to add to his press-clipping collection and serve up red meat (er, blue meat) for the TV airwaves, he's short-circuiting hearings to ram through political power grabs masquerading as "reform." Waxman pushed massively expensive, complicated cap-and-tax legislation through the House last year by leapfrogging over subcommittee debate. He also staved off Republican efforts to slow down and scrutinize the behemoth bill by hiring a "speed reader" to plow through the 900-page bill during mark-up.

Waxman himself couldn't be bothered to familiarize himself with the trillion-dollar regulatory tyranny stuffed into his own bill. When a GOP colleague on his committee asked him whether he knew a specific provision had been embedded in the proposal with his name on it, Waxman snorted: "You're asking me?"

The indignant interrogator then went on to question the patriotism of anyone who dared ask questions about the climate change tax scheme -- and accused conservatives of "rooting against the country."

Now, Waxman is targeting the heads of Deere, Caterpillar, Verizon and AT&T with "invitations" they can't refuse to testify at an April 21 hearing on their public statements regarding Demcare-caused writedowns. Waxman's fishing expedition letters sent out last week "asked" the company heads to produce copious documentation.

Business execs are damned if they do disclose how the costs of the new federal health care taxes will hit their bottom line and damned if they don't. If they stay silent, they'll be violating Securities and Exchange Commission disclosure requirements passed by Congress after the Enron scandal. If they talk, they'll be paraded in front of the camera like those poor tobacco heads Waxman waxed more than 15 years ago.

Who's next? On Monday, Prudential said it would take a $100 million charge in the first quarter thanks to Demcare. In Colorado, the Steamboat Ski and Resort Corp. said the health care law will cost $2 million a year starting in 2014. AK Steel Corp., 3M and Valero Energy have all announced similar writedowns. At this rate, if Waxman insists on hauling up every last truth-teller in the marketplace, he'll be holding an inquisition-a-thon a day.

And that would suit the Witch Hunter of Capitol Hill just fine. If he isn't meddling, he isn't working. And if he isn't using his powers to bully, bulldoze or bankrupt his enemies, he is failing the gods of progressivism.