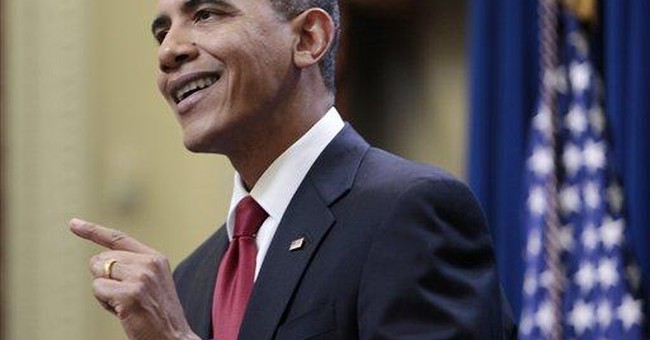 Pet federal education programs will be exempt (including $4 billion for the White House “Race to the Top” standards initiative and an additional $1.35 billion he just requested in the 2011 budget). Green jobs spending will be exempt. (Obama proposed $10 billion in new clean energy spending earlier this month.) Electorally driven tax-credit expansions will be exempt. The health care takeover plan is not included. As even The New York Times reported, the “estimated $250 billion in savings over 10 years would be less than 3 percent of the roughly $9 trillion in additional deficits the government is expected to accumulate over that time.”

Which amounts to a molecule in a drop of the ocean of red ink in which American taxpayers have been drowning.

The current Spender-in-Chief unveiled details of this lofty new work of political fiction on Monday with more fanfare than a new “Twilight” title. It was supposed to be the centerpiece of the State of the Union address. But by Tuesday morning, Obama’s illusion of fiscal discipline had been shredded left, right and center. By Tuesday afternoon, irritated White House spokesman Robert Gibbs was already downplaying the gimmickry. It’s just something Obama will “mention,” Gibbs bristled.

“During the campaign, you may recall that John McCain touted option 1 -- the hatchet approach of an across-the-board freeze.

“The President was critical of that approach then, and we would be critical of it now. It’s not what we’re proposing. To the contrary, the entire theory of the President’s proposed freeze is to dial up the stuff that will support job growth and innovation while dialing down the stuff that doesn’t. Under our plan, some discretionary spending will go up; some will go down. That’s a big difference from a hatchet. …

“President Obama deeply understands the various imperatives of this moment in time, even if they don’t always point in the same direction.”

So, he had a hatchet on Monday when he wanted headlines praising his return to austerity in the wake of the GOP’s Massachusetts Senate victory; a scalpel on Tuesday when he needed to mollify the big-government left. What will he wield at the State of the Union address on Wednesday night? A variable-speed Dremel rotary tool?

Some conservative Beltway analysts are cheering Obama’s fiscal freeze follies as a step in the right direction, a rhetorical victory and a “good start.” Pardon me for not joining in the standing ovation for the latest performance of White House kabuki theater. Praising the president for carrying on the charade of budget reform because a few piddling cuts are real is like complimenting the Naked Emperor’s fingernails: So he didn't have any clothes. At least his cuticles were real. It’s a start!

Moreover, who believes this freeze will last for the entire, cynically timed three-year period that the White House announced fewer than 72 hours ago? McDonald’s French fries have a longer shelf life than Obama’s pledges of fiscal accountability. All it’ll take is one more bad jobs report, one Chicken Little Congress-induced panic, to drop the budget restrictions faster than reality dad Jon Gosselin’s ex-girlfriends.

One year after riding into town on a wave of adulation and ambition, Obama has lost his “swagga.” His pre-State of the Union appearances have been listless and perfunctory. His dependence on a teleprompter -- even for a standard 6-minute stump statement at an elementary school -- is now the butt of universal mockery. And his political machine has been forced to lay down enough fake Astroturf support to cover a football field.

This is the time to nail the phonies in the White House, not to beg for meetings in hopes of bipartisan problem-solving. There’s little triumph in Obama’s empty “concessions” on the need to cut spending. They are fueled not by sincere commitment to reining in Washington’s appetites, but by craven political self-preservation.

The president has lately regressed into his “I will fight for you” campaign sloganeering -- by which, of course, he means, “I will fight for me.” There will be no hands reaching across the aisle. Obama’s too busy using them to point fingers at everyone else for his own political meltdown.