Turkeys of the Year 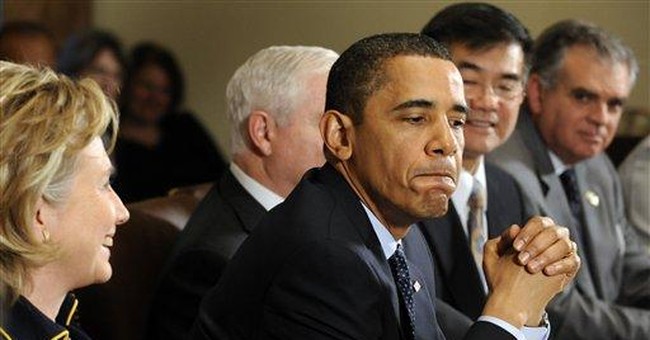 As we gather round the Thanksgiving table, bow our heads in prayer and feast on the holiday bird, it is only fitting to take a moment to fete the unforgettable turkeys of 2009.

1. The stimulus. Back in February, I wrote that if the trillion-dollar stimulus plan were a Thanksgiving dinner entree, it would be a Turbaconducken -- the heart attack-inducing dish of roasted chicken stuffed inside a duck stuffed inside a turkey, all wrapped in endless slabs of bacon. And so it has come to pass. After the Democratic majority larded up the massive spending package with earmarks and bribes, President Obama declared it pork-free and has stubbornly touted its job creation benefits for out-of-work Americans.

Reality check? The Washington Examiner reports that more than 10 percent of the jobs the Obama administration claimed were "created or saved" by the stimulus are doubtful or imaginary. ABC News uncovered countless examples of bogus congressional districts listed as stimulus beneficiaries by the Obama stimulus tracking website, Recovery.gov. The money has been lavished on shady beauty schools in New Hampshire, prison inmates in Texas and wind companies in Spain and China. Just this week, a California audit found that the Department of Corrections and Rehabilitation overstated the number of jobs saved by federal stimulus dollars by upward of 13,000.

While this Generational Theft Act continues to soak up our tax dollars and add to our children's and grandchildren's debt, the Democratic majority is in the government kitchen cooking up a second stimulus turkey to provide federal infrastructure money to public-sector unions. Gobble, gobble.

2. President O-bow-ma. The candidate who pledged to restore America's standing in the world couldn't figure out how to stay standing in front of world leaders. In April, he crouched before Saudi King Abdullah. This month, he provoked global derision when he broke protocol and performed a spineless blunder in front of the Japanese emperor.

The kowtower-in-chief's body language reflected the administration's broader foreign policy prostrations -- including scrapping missile defense in the Czech Republic and Poland, canceling a meeting with the Dalai Lama to appease China, sitting on its hands this summer during the Iranian election protests and unveiling the 9/11 show trials in New York City that will provide a circus platform for jihadis and international Bush-haters.

The left complained that George W. Bush was too much of a cowboy on the global stage. It's better than having a waterboy.

3. Green jobs czar Van Jones. This deep-fried turkey was recruited by Team Obama's Chicago consigliere Valerie Jarrett, who boasted about recruiting the Marxist rabble-rouser from Oakland. He openly crusaded to free Philadelphia death row cop-killer Mumia Abu-Jamal, bashed capitalism with radical revolutionary rhetoric and signed a 9/11 conspiracy petition that he meekly disavowed in a botched attempt to save his job. Jones is now at the Center for American Progress, run by Obama transition official and Democratic operative John Podesta.

The other turkey in the story, Val Jarrett, escaped unscathed and went on to push the Obamas into their failed crony campaign for the 2016 Olympics bid in Copenhagen -- a taxpayer-funded, hubris-infused debacle that ties with Van Jones for third biggest turkey of the year. Rio got the Games. America got a closer look at the pay-for-play patrons, power brokers and developers in the Windy City who have put an indelible Chicago stamp on the Potomac.

4. The New York Times. Scooped by Fox News, conservative blogs and talk radio on the exploding ACORN scandal, the paper whitewashed its own role in covering up the community organizing racket's financial shenanigans last fall when it cut off a reporter's investigation a few weeks before Election Day. Jill Abramson, the Times' managing editor for news, acknowledged that her staff was "slow off the mark" and blamed "insufficient tuned-in-ness to the issues that are dominating Fox News and talk radio." They assigned a new "opinion media monitor" to track the competition, but refused to identify the watchdog for fear that he/she would get too many mean, intrusive e-mails and phone calls.

More recently, the paper's website demonstrated that its real motto is "All the inconvenient news that's fit to suppress." The Times' lead environmental blogger, Andrew Revkin, haughtily refused to reprint damning e-mails leaked by a hacker in the burgeoning "ClimateGate" scandal. The documents reveal a long trail of manipulated data, but Revkin balked at the ill-gotten trove. The blabbermouths at the Times had no problem exposing national security secrets to undermine Bush. But shed light on scientific hoaxes that undermine Al Gore? Unethical!

For refusing to sit down and shut up in the face of such unhinged bigotry, and for exposing the foulness of the political fowl, I have two words for them: Thank you.