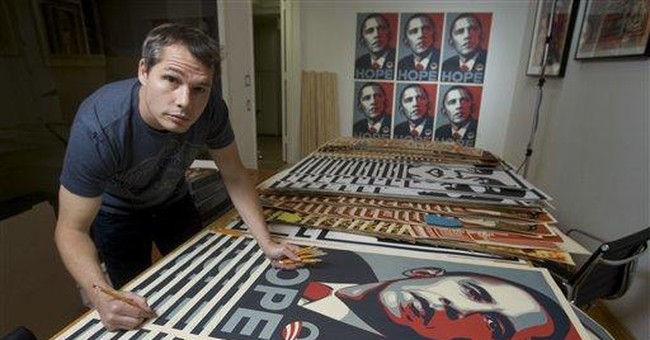 Hollywood hearts Obama. Obama hearts government-directed national service. That is why you won’t be able to change the TV channel all week without getting lectured about the need to get off the couch and Do Something. (After your favorite shows are over, of course.) Creeped out? You should be.

The entertainment industry, inspired by Obama’s $6 billion expansion of government volunteerism spending, is coordinating plot lines and ads to push public service. “The message will be nearly ubiquitous,” reports the Los Angeles Times, “starting in the morning with programs such as ‘Today’ and ‘The View,’ and then echoed on soap operas, prime-time series and late-night shows.” First lady Michelle Obama, a relentless AmeriCorps promoter who publicly extolled the Tinseltown initiative last month, will cap off the week with an appearance on “The Jay Leno Show” on Friday.

But don’t expect Leno to ask Mrs. Obama about her reported meddling in personnel decisions at the scandal-plagued AmeriCorps. Or about the program’s long history as a government boondoggle stuffed with make-work jobs, permanent bureaucracies, left-wing slush funds and partisan lobbyists. More on that in a moment.

Spearheaded by a nonprofit called the Entertainment Industry Foundation (EIF), organizers deny any partisan or political motivation. But <> editor John Nolte published an internal memo from EIF titled “Answering the Call,” which describes the entire multiyear campaign as a direct response to President Obama’s call “for a new era of responsibility.” The massive leftward tilt in Hollywood donations to Democratic campaign coffers speaks for itself. As do the celebrity vows of volunteer-mongers like Demi Moore, who pledged in a recent national service PSA not to be a servant to her fellow citizens or her country, but “a servant to Barack Obama.”

EIF is working in partnership with the Corporation for National and Community Service (CNCS), the parent organization of AmeriCorps.

It’s the same CNCS that then sat by and meekly watched Team Obama and the U.S. Attorney in Sacramento railroad Walpin after the November 2008 election for doing his job.

It’s the same CNCS that has hired Michelle Obama’s former chief of staff, Jackie Norris, as national service adviser to ensure -- in her words -- that corporation officials are their “No. 1 cheerleaders.”

It’s the same CNCS that smeared Walpin as “confused” and “disoriented” -- and then sacked the honest, independent watchdog for raising questions on behalf of taxpayers.

And it’s the same CNCS that last month administered a mere slap on the wrist to the largest AmeriCorps program in the nation for massive fiscal mismanagement. As Youth Today, a niche publication that covers the national service sector, reported recently, “CNCS docked the City University of New York (CUNY) $345,700 for this year, reducing its grant from $900,000 to $554,300.”

Walpin had uncovered a raft of grant violations, including criminal background check lapses and “pervasive problems of eligibility, timekeeping and documentation” in an audit earlier this year. He challenged duplicative educational awards of more than $16 million. CUNY refused to return excess funds that it had drawn down, failed to revise procedures to prevent such grant abuse and refused to provide proof documenting that its AmeriCorps participants actually existed.

Walpin advised AmeriCorps’ parent organization, CNCS, to cut off any new funding and reexamine past government funding totaling upward of $75 million. But internal notes from CNCS discussions show that they had more “concern about potential for damage being done” and were irked by the “bad timing” of Walpin’s audits. In the end, the agency settled for cutting its current grant by less than half and keeping CUNY on the dole.

So much for a “new era of responsibility.”

Walpin is suing to get his job back as the Obama political machine takes over the national service juggernaut. It’s a David vs. Goliath, made-for-TV plot line. But when the government-undermining message threatens the White House narrative, it’s not fit for prime time.