Who's Behind the White House War on Fox News? 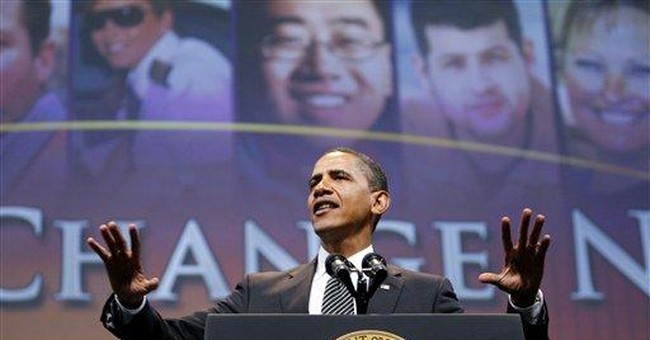 Dunn found refuge in rival CNN's green zone, where she blasted Fox News as a "research arm of the Republican Party." Unhappy with headline-generating Fox News hosts who have wrested control of the news cycle from Team Obama, Dunn complained about "opinion journalism masquerading as news."

Well, that is certainly an apt description of an Obama-sympathizing "news" segment on "The Situation Room with Wolf Blitzer," which purported to "fact check" a Saturday Night Live skit mocking the president's lack of accomplishments.

Yes, the "real" news fact-checked the fake news to cover for Obama's deficiencies. Zero complaints from the White House communications office about that. Or about authentic CNN journalist Anderson Cooper using his prime-time show to make vulgar sexual jokes about Tea Party activists. Or about the joint White House-ABC News health care reform infomercial that aired earlier this summer.

Some "opinion journalism" is more equal than others.

Debates about the blurred lines between opinion and journalism are all well and good. But don't the talking-points crafters in the Oval Office have something better to do than carp about the talking points they don't like hearing on the one cable network that hasn't been completely overrun by Obama sycophants? (Full disclosure: I've been a Fox News contributor since 2001.)

The corruptocratic affiliations of Obama's communications team are illuminating. His press shop can't rise above the fray because they've been entrenched in the Beltway fray for years. They can't help themselves.

Democratic media consultant Dunn's claim to fame is her decade-long service as chief strategist for disgraced Democrat and former Senate Majority Leader turned health care lobbyist Tom Daschle. She was in the thick of his failed re-election campaign as Daschle asserted a bogus property-tax homestead exemption claim on his $1.9 million D.C. mansion -- which he listed as his primary residence despite voting in South Dakota and claiming it as his primary residence in order to run for re-election. And Dunn was with Daschle during the years he failed to pay gobs of taxes on a luxury car and driver provided to him by crony donor Leo Hindery Jr.

After working as communications manager for Obama's political action committee and then as senior adviser to his 2008 presidential campaign, Dunn "trained" White House press secretary and anti-Fox sniper Robert Gibbs. Deputy communications director Dan Pfeiffer is another young protege of Dunn's, who worked with her on the disastrous 2004 Daschle re-election campaign.

(Another Daschle connection: Obama transition adviser John Podesta, who served as Daschle's counselor and has helped staff the administration with many alumni of his left-wing think tank, the Center for American Progress. One CAP fellow, Hugo Chavez-admiring radical Mark Lloyd, has attacked conservative talk radio -- the second home of several Fox News hosts -- and is now the FCC's "Diversity Czar.")

Dunn is married to Robert Bauer, a Washington, D.C., corporate lawyer who served as general counsel for Obama for America. It was Bauer who lobbied the Justice Department unsuccessfully last fall to pursue a criminal probe of American Issues Project (AIP), an independent group that sought to run an ad spotlighting Obama's ties to Weather Underground terrorist Bill Ayers.

It was Bauer who attempted to sic the DOJ on GOP donor Harold Simmons and sought his prosecution for funding the ad. It was Bauer who tried to bully television stations across the country to compel them to pull the spot. All on Obama's behalf.

While conservatives revel in the left's hysteria over Fox News Channel's dominance, more of Obama's friends hope he'll wipe his nose and man up. Fat chance. As long as he's surrounded by career flacks who demonize dissent to distract from the Beltway stench, the White House will remain an all-whine zone.