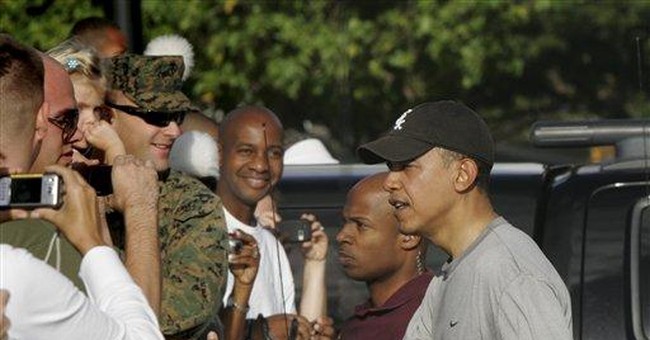 Ah, the perks of media affection. On Christmas Day, the Washington Post delivered a front-page paean to Barack Obama's workout habits. The 1,233-word ode to O's physical fitness read more like a Harlequin romance novel than an A-1 news article.

Zaslow imparted us with vital information about buff Bam's regimen: "Obama has gone to the gym for about 90 minutes a day, for at least 48 days in a row." The Washington Post enlightened us with more gushing commentary from Obama friends and associates, who explain how, as the subtitle of Zaslow's opus put it, "Gym Workouts Help Obama Carry the Weight of His Position."

For adoring journalists, you see, Obama's workout fanaticism demonstrates the discipline and balance in his life. Apparently, what's good for Obama's glistening pecs is good for the country. Zaslow quoted Obama Chicago crony Marty Nesbitt, who offered this diagnosis: "He doesn't think of it as something he has to do -- it's his time for himself, a chance for him to reflect. It's his break. He feels better and more revved up after he gets in his workout."

And when Obama feels better, the skies will part, the sun will shine (in moderate, environmentally correct, non-global warming-inducing amounts, of course), and peace will reign worldwide!

Too bad the doughy, McDonald's-chomping, coffee-guzzling members of the White House press corps couldn't see the merits of White House exercise over the past eight years. After giggling about his out-of-shape colleagues in the media, Zaslow mentioned in passing that President George W. Bush shares Obama's commitment to health. What he failed to acknowledge is that the same reporters who so greatly admire Obama's lithe figure derided Bush for his training schedule.

Former Washington Post writer Jonathan Chait famously attacked Bush three years ago in an opinion piece for the Los Angeles Times headlined "The (over)exercise of power." Recounting how President Bush ran 3.5 miles a day and preached more cross-training to a federal judge, Chait fumed, "Am I the only person who finds this disturbing? ... What I mean is the fact that Bush has an obsession with exercise that borders on the creepy."

Chait argued that Bush's passionate devotion to exercise was a dereliction of duty. "Does the leader of the free world need to attain that level of physical achievement?" he jeered. "It's nice for Bush that he can take an hour or two out of every day to run, bike or pump iron. Unfortunately, most of us have more demanding jobs than he does."

Can you imagine any member of the Obamedia mocking the incoming gym rat-in-chief this way?

Chait was not alone. Reuters journalist Caron Bohan weaved the same unhinged themes into a piece on Bush's two-hour, 17-mile bike ride with cycling champ Lance Armstrong in Crawford, Texas, in 2005. After noting his six-day-a-week workout schedule, Bohan steered the piece into an anti-war screed:

"Bush says exercise helps sharpen his thinking. But some of his critics view his exercise obsession as an indulgence that takes time away from other priorities. Among them is Cindy Sheehan, the Vacaville, Calif., mother of a soldier killed in Iraq, who until late last week was camped out down the road from Bush's ranch seeking a meeting with him to discuss her opposition to the war. Sheehan, who left her vigil on Thursday to tend to her sick mother, has said she believes Bush should take fewer bike rides to have more time to focus on the 'the nation's work.'"

The good news: In just a few short weeks, W. will be able to exercise in peace, free from the disapproving glares of journalists now rushing to mop the sweat -- er, the glisten -- from Barack Obama's hallowed brow.