The Democratic Culture of Corruption 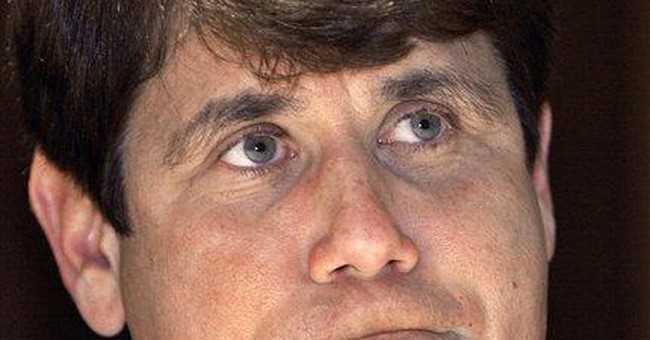 U.S. Attorney Patrick Fitzgerald called the breadth and depth of charges against Blagojevich and his Democratic Chief of Staff John Harris "staggering." That's an understatement. Anything that breathed was a potential shakedown target. It's the Chicago way. Democrat Blago's so dirty he'd hit up a children's hospital for money. Oh, wait. He's accused of doing that, too.

Democrat Blago allegedly conspired to use his power to appoint President-elect Barack Obama's vacant Senate seat as a bargaining chip for financial payment. He explored trading on that authority for an appointment as Health and Human Services secretary or as an ambassador or for installment in a cushy union position. (He discussed his trading scheme with an unnamed "SEIU (Service Employees International Union) official" and unnamed "various consultants" in Washington.)

According to the criminal complaint released yesterday, he also tried to leverage his influence over the sale of Wrigley Field (owned by Tribune media company) in an attempt to get Chicago Tribune editorial writers who called for his impeachment fired -- which illustrates the very perils of media/government entanglements I warned about in my newspaper bailout column last week. His wife, Patricia Blagojevich, was apparently in on the thuggery, too. Taking a break from her first lady duties advocating "on behalf of women and children," she is heard in taped discussions about the Chicago Tribune/Wrigley Field deal telling a governor's aide "to hold up that f**king Cubs sh*t. … F**k them."

Pelosi, champion of women as political cleaner-uppers, was unavailable for comment.

Fitzgerald says President-elect Obama was not implicated in the plethora of charges against Democrats Blago and Harris. The national media went out of their way to absolve him, too. But declaring Team Obama's hands clean -- especially with Blago crony and indicted Obama donor Tony Rezko in the middle of it all -- is premature. (And if you're wondering why I keep putting "Democrat" in front of the accused corruptocrats, it's because the mainstream newspapers can't seem to remember to identify their party prominently the way they do when Republicans are nabbed.)

Chicago's Fox affiliate reports that Obama Chief of Staff and Chicago hometown heavy Rahm Emanuel was the catalyst for the Blago takedown and suggests Rahm-bo tipped off the feds. If so, this raises more questions than it answers about who on the transition team may have talked to Blago and his shakedown artists about what and when. Needless to say, if it were the Republican Bush administration tied to the Blago bust, the White House press corps would be frothing like a pack of Michael Vick's pit bulls.

Democrats and the media can no longer rest on the old rationalization that Blago is an exception to the "we're cleaner than thou" rule. 2008 was the year of Democratic Reps. William "Cold Cash" Jefferson, Charlie "Sweetheart Deals" Rangel, and former Detroit Mayor Kwame "Text Me" Kilpatrick. It was the year Democratic Massachusetts State Senator Dianne Wilkerson got caught stuffing bribes from an FBI informant down her shirt. It was the year 12 Democratic leaders and staffers in Pennsylvania's state Capitol were stung in a massive corruption scandal involving cash, sex and abuse of public office. And it was the year of multimillion-dollar embezzlement scandals at Democratic satellite offices of ACORN and the SEIU.

The Democrats have met the culture of corruption, and it looks like it ain't just elephants among the jackasses soiling public office.