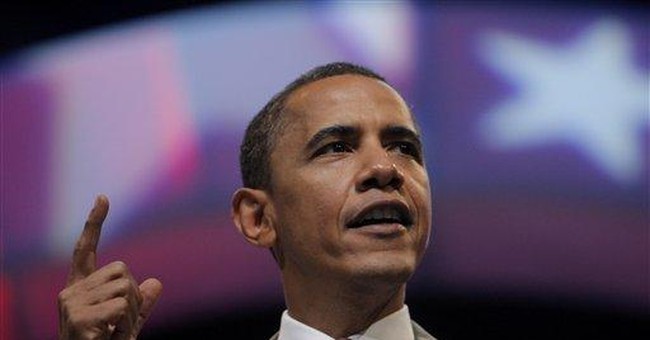 In all the brouhaha over the New Yorker's satirical cover cartoon of Barack and Michelle Obama, a truly "tasteless and offensive" passage in the magazine's feature article got lost. The magazine piece quotes Obama's recommendations for how to stop jihad, which he had previously published in a local Chicago newspaper eight days after 9/11. It's a self-parody of blind, deaf and dumb Kumbaya liberalism:

"We must also engage, however, in the more difficult task of understanding the sources of such madness. The essence of this tragedy, it seems to me, derives from a fundamental absence of empathy on the part of the attackers: an inability to imagine, or connect with, the humanity and suffering of others. Such a failure of empathy, such numbness to the pain of a child or the desperation of a parent, is not innate; nor, history tells us, is it unique to a particular culture, religion, or ethnicity. It may find expression in a particular brand of violence, and may be channeled by particular demagogues or fanatics. Most often, though, it grows out of a climate of poverty and ignorance, helplessness and despair."

Is this man for real? Osama bin Laden's murderous legions are plenty able to "imagine" the "suffering of others." Go watch an al-Qaida beheading snuff video. Just Google it or surf YouTube. Imagining the suffering of infidels is covered amply in basic Jihadi Training 101.

You'll note, too, that Obama's fresh instinct in the week after the 9/11 attack was to diagnose it as a "tragedy" stemming from lack of "empathy" and "understanding" -- instead of as the deliberate, carefully planned evil act of the long-waged Islamic war on the West that it was.

As for Obama's continued delusion about the "climate of poverty and ignorance" that supposedly breeds Muslim terrorists, can American politicians ever rid themselves of this unreality-based trope? This belief is part and parcel of the same idiocy that led the State Department to embrace "spa days" for Muslims to "build bridges" with the Arab world and President Bush to open up our aviation schools to more Saudi students to "improve understanding."

John McCain also alluded to education-as-cure for Islamic terrorism at the L.A. World Affairs Council in March, when he declared, "In this struggle, scholarships will be far more important than smart bombs." Just what we need: more student visas for the jihadi-infested nation that sent us the bulk of the 9/11 hijackers.

Author and National Review Online blogger Mark Steyn's sharp rejoinder to McCain then applies to Obama now: "There's plenty of evidence out there that the most extreme 'extremists' are those who've been most exposed to the west -- and western education: from Osama bin Laden (summer school at Oxford, punting on the Thames) and Mohammed Atta (Hamburg University urban planning student) to the London School of Economics graduate responsible for the beheading of Daniel Pearl. The idea that handing out college scholarships to young Saudi males and getting them hooked on Starbucks and car-chase movies will make this stuff go away is ridiculous -- and unworthy of a serious presidential candidate."

Ayman al-Zawahiri didn't need more education or wealth to steer him away from Islamic imperialism and working toward a worldwide caliphate. He has a medical degree. So does former Hamas biggie Abdel al-Rantissi. Seven upper-middle-class jihadi doctors were implicated in the 2007 London/Glasgow bombings. Suspected al-Qaida scientist Aafia Siddiqui, still wanted by the FBI for questioning, is a Pakistani who studied microbiology at MIT and did graduate work in neurology at Brandeis.

And as I've reported before and must reiterate for the hard of hearing in Washington, lowering academic standards at American colleges helped al-Qaida mastermind Khalid Shaikh Mohammed further the jihadi cause. In the early 1980s, he enrolled at tiny Chowan College in Murfreesboro, N.C., which had dropped its English requirements to attract -- ahem -- wealthy Middle Easterners.

At Chowan, Mohammed bonded with other Arab Muslim foreign students known as the "Mullahs" for their religious zeal. Mohammed then transferred to North Carolina Agricultural and Technical State University, where he earned his degree in mechanical engineering along with 30 other Muslims.

Mohammed applied his Western learning to oversee the 1993 World Trade Center bombing plot (six Americans dead), the U.S.S. Cole attack (17 American soldiers dead) and the 9/11 attacks (3,000 dead). He has also been linked to the 1998 African embassy bombings (212 dead, including 12 Americans), the plot to kill the pope, the murder of American journalist Daniel Pearl and the Bali nightclub blast that killed nearly 200 tourists, including two more Americans.