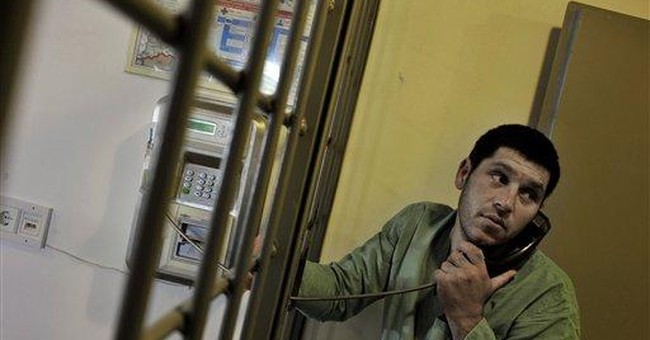 If you think the bad economy has "solved" America's immigration problems, welcome to your end-of-the-year reality check. It's certainly true illegal crossings from the south are down and that many foreign workers are returning to their native lands as work dries up. But border chaos, haphazard enforcement, massive backlogs and deportation negligence remain the order of the day.

A half-million citizenship applications have been pending for more than nine months. Some 700,000 illegal alien absconders -- fugitives from deportation like Barack Obama's aunt Zeituni Onyango -- are free. An estimated 4-5 million illegal visa overstayers from around the world remain in the country. Both Big Business and left-wing ethnic groups have colluded to prevent an employer verification program for workers' citizenship status from getting implemented nationwide. And the borders are still largely borders in name only.

In June, the White House pushed through a $1.6-billion border security spending plan ... for Mexico and Central America. While our own border fence remains incomplete, taxpayers shelled out for helicopters, surveillance equipment, computer infrastructure, expansion of intelligence databases, anti-corruption initiatives, human rights education and training, and anti-money laundering programs for our southern neighbors. So, how's the so-called Merida Initiative working out?

As terrorized citizens of Mexico will tell you, all hell has broken loose. Corrupt police officials and narco-insurgents have left a horrific trail of beheaded and bullet-ridden bodies in their wake on both sides of the border. Mexican Army incursions into U.S. territory are a regular occurrence. In Monterrey, bandits opened fire and threw a grenade at the U.S. consulate this fall. A top Mexican immigration official was arrested in October carrying about 77 kilos of pot in Arizona. On a single weekend in Tijuana, 40 people were murdered, including nine victims who were decapitated. Two weeks ago, famed American anti-kidnapping negotiator Felix Bautista disappeared from the "relatively safe" northern industrial city of Saltillo in Coahuila state. No word on his whereabouts.

The apocalyptic conditions have prompted some Mexican lawmakers to revisit the country's ban on capital punishment. That's right. Members of the same foreign government that took America to court over our death penalty laws -- and tried to block the state of Texas from executing illegal alien Death Row murderers -- are now open to the idea of imposing the death penalty on the thugs on their own soil. And after years of vehement protests against the United States for its meager attempts at immigration enforcement, Mexico is cracking down hard on illegal Cuban immigrants caught trying to enter the country from the south. They forged an agreement with Cuba to immediately send back illegal aliens -- none of that "undocumented worker" mushiness for them -- and punish human smugglers.

Such lawlessness, Mexico has apparently realized, is a grave threat to its people. Without order, there can be no peace. And chaos, as I've argued endlessly since September 11, is an invitation for those with far more nefarious intentions. Perhaps this is why Mexico slapped a 60-year prison term on a human smuggler who helped some 200 illegal aliens cross into the United States from Mexico -- including Hezbollah supporters. In a little-noticed announcement this month, Mexican prosecutors reported the stiff sentence against Salim Boughader Mucharrafille, a Mexican of Lebanese descent who operated a cafe in Tijuana and smuggled terrorist sympathizers into San Diego. Mucharrafille's accomplice was Imelda Ortiz Abdala, a Mexican foreign service official who helmed the Mexican consulate in Beirut.

No illegal alien demonstrations ensued following the sentencing. No cries of racism and xenophobia clouded the news. No demands for amnesty and open borders arose. One hopes the incoming Obama administration can learn from our neighbors to the south the hard lesson Washington has abandoned since 9/11: Immigration control is a national security issue. Blood-stained reality clarifies the mind.