The Return of the Eagles 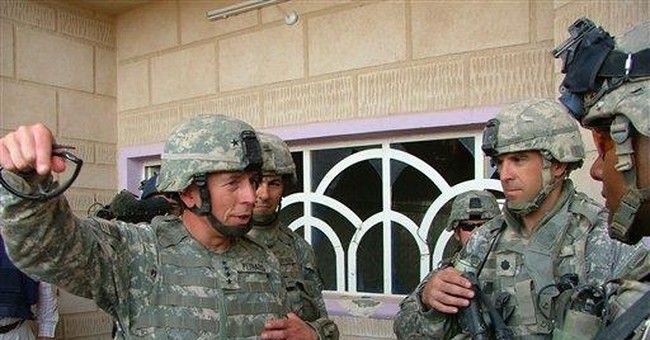 The dog days of August have drawn to a close. This is the calm before the gathering political storm. On Sept. 15, the far-left group ANSWER ("Act Now to Stop War and End Racism") will descend on the nation's capital to demand what they've been demanding for the last six years in the aftermath of the 9/11 attacks: immediate withdrawal from Iraq and Afghanistan; immediate closure of the Guantanamo Bay detention facility and immediate release of every last suspected al Qaeda operative in American custody; immediate impeachment of President Bush and Vice President Cheney; and immediate capitulation to our enemies at home and abroad.

Who will be there to counter the Jane Fonda retreads? Will you?

Earlier this year, I reported on a new, nonpartisan movement that arose to challenge the surrender lobby. On a bitter cold weekend in March, the Gathering of Eagles brought together veterans, families of active-duty servicemen and servicewomen, Rolling Thunder members, military bloggers and their grass-roots supporters to raise their pro-troops, pro-mission voices. I interviewed Eagles who flew in from San Francisco, rode motorcycles south from Georgia, drove all night from Boston, and trekked in caravans from coast to coast to answer ANSWER. At the crack of dawn, facing biting winds and contemptuous taunts, tens of thousands of Eagles stood guard over war memorials threatened by anti-war anarchists and lined the streets where bongo drum-beating retreatists marched.

The Gathering of Eagles turnout was unprecedented. The Cindy Sheehanistas and socialist rabble-rousers had never been met and matched with such force. Now, the Eagles are organizing a return to Washington at a historic moment in the global war against jihad. Gen. David Petraeus, top commander in Iraq, and U.S. Ambassador to Iraq Ryan Crocker are expected to testify before the Senate on Sept. 11. Yes, that Sept. 11. Four days later, Sept. 15, is the deadline for the president to submit reports to Congress on how Iraq is meeting benchmarks for progress since the troop surge was announced in January.

ANSWER will lead what it bills as a "massive" Sept. 15 demonstration to "End the War Now!" -- no matter what Gen. Petraeus and Ambassador Crocker report. They will hold a "die-in" and once again use the names and legacies of fallen soldiers without their permission to push for a precipitous pullout. They'll remain in Washington the following week to hold a Code Pink-led protest in the House and an Iraq Veterans Against the War-led harassment campaign against military recruiters in D.C. and nationwide.

For every anti-Bush activist agitating for immediate withdrawal and throwing rocks at ROTC offices, an Eagle will be there in Washington to oppose the planting of the white flag. The organizations leading the way include the Gathering of Eagles, Eagles Landing, Move America Forward, the Military Order of the Purple Heart, Free Republic, Vets for Freedom and the Victory Caucus. (Visit gatheringofeagles.org and moveamericaforward.org for details.)

As retired Army Col. Harry Riley explains, "Unlike the '60s and '70s, the anti-war lemmings will not have the streets or the political stage to themselves. This time, Eagle Americans -- we who support our troops, understand the stakes in the War on Terror and the true nature of our enemy, who aren't blinded by an insane hatred of our way of life and our form of government -- will also be in Washington, D.C., to show Congress that we will not tolerate another betrayal of our own forces or our allies. . . . While the anti-democracy forces are well-funded by pro-left, anti-Americans, we Eagles have steadily been building our own coalition to stop ANSWER in its tracks, and keep Congress focused on winning the war, not their political ambitions."

I wouldn't miss it for the world.