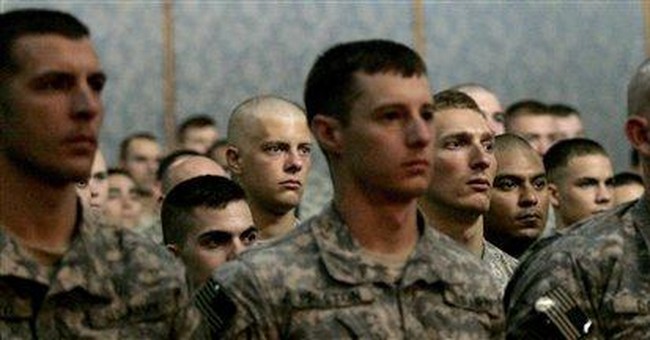 Beauchamp belongs in the same ward as John F. Kerry, the original infectious agent of the toxic American disease known as Winter Soldier Syndrome. The ward is filling up.

U.S. military investigators concluded this week that Beauchamp concocted allegations of troop misconduct in a series of essays for The New Republic. "The investigation is complete and the allegations from PVT Beauchamp are false," Major Steven Lamb, a spokesman for Multi National Division-Baghdad, told USA Today. The New Republic is standing by Beauchamp's work. But Michael Goldfarb, online editor and blogger at The Weekly Standard who first challenged Beauchamp's writing, reported Monday that Beauchamp had "signed a sworn statement admitting that all three articles he published in the New Republic were exaggerations and falsehoods -- fabrications containing only 'a smidgen of truth,' in the words of our source."

To illustrate the soul-deadening impact of war, Beauchamp had described sitting in a mess hall in Iraq mocking a female civilian contractor whose face had "melted" after an IED explosion. "I love chicks that have been intimate -- with IEDs," Pvt. Beauchamp claimed he said out loud in her earshot. "It really turns me on -- melted skin, missing limbs, plastic noses." Beauchamp recounted vividly: "My friend was practically falling out of his chair laughing. The disfigured woman slammed her cup down and ran out of the chow hall."

It wasn't true. After active-duty troops, veterans, embedded journalists and bloggers raised pointed questions about the veracity of the anecdote, Beauchamp confessed to The New Republic's meticulous fact-checkers that the mocking had taken place in Kuwait -- before he had set foot in Iraq to experience the soul-deadening impact of war.

Military officials in Kuwait tried to verify the incident and called it an "urban legend or myth." Beauchamp's essays are filled with similarly spun tales. How much of a bull-slinger was Beauchamp, an aspiring creative writer who crowed on his personal blog that he would "return to America an author" after serving (which he told friends and family would "add a legitimacy to EVERYTHING I do afterwards")? The very first line of his essay "Shock Troops," which opened with the melted-face mockery, was this: "I saw her nearly every time I went to dinner in the chow hall at my base in Iraq."

"Nearly every time." At "my base in Iraq." Complete and utter bull.

Defenders of The New Republic, a left-leaning magazine infamously duped by another young and ambitious fabulist, Stephen Glass, say the Beauchamp saga has been 1) blown out of proportion; 2) perpetuated by sloppy, rumor-mongering bloggers; 3) used as a distraction from the troubles in Iraq; and 4) exploited by "chickenhawks" who deny that war atrocities happen.

But the truth is, you won't find a single Bush Kool-Aid drinker among the military bloggers, embedded independent journalists and active-duty troops who prominently questioned the Beauchamp sham. They know it ain't all going swimmingly overseas. But unlike Pvt. Beauchamp, they're committed to telling the whole truth about the war, not just approximations and embellishments that will score easy magazine gigs and future book deals with elite New York City publishers. The doubters of Scott Thomas know atrocities when they see them. But, unlike the TNR editors, they know steaming bull dung when they smell it.

Ever since John Kerry sat in front of the Senate Foreign Relations Committee and accused American soldiers of wantonly razing villages "in fashion reminiscent of Genghis Khan," the Left has embraced a small cadre of self-loathing soldiers and soldier wannabes willing to sell their deadened souls for the anti-war cause. Think Jimmy Massey, the unhinged Marine who falsely accused his unit of engaging in mass genocide against Iraqis. Think Jesse MacBeth and Micah Wright, anti-war Army Rangers who weren't Army Rangers.

Winter Soldier Syndrome will only be cured when the costs of slandering the troops outweigh the benefits. Exposing Scott Thomas Beauchamp and his brethren matters because the truth matters. The honor of the military matters. The credibility of the media matters. Think it doesn't make a difference? Imagine where Sen. John Kerry would be now if the Internet had been around in 1971.

Leah Barkoukis
Noem Has a Message For the Biden Administration on Accepting Illegal Immigrants
Leah Barkoukis
McConnell Rips Democrats' Partisan Court Packing Plan
Reagan McCarthy
Brace Yourselves, Black Reparations Is About to be a Debate Topic on the Hill
Matt Vespa
Uh Oh: Democrats are Bleeding Support with One of Their Key Voting Blocs
Matt Vespa