The Witch Hunt Against Gun Owners 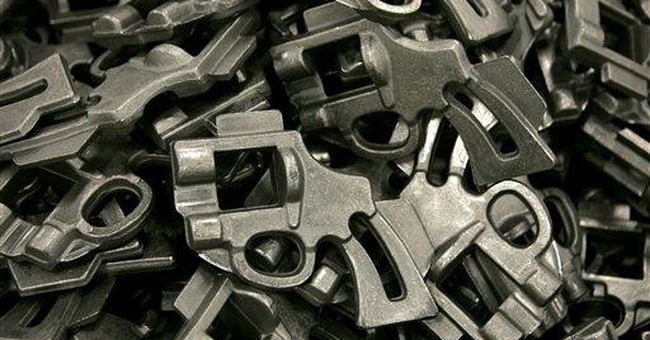 It's a message narcissistic journalists need to hear again. A decade ago, Heston chastised the media in a National Press Club speech for its collective ignorance, apathy and open hostility toward gun owners' rights: "Clearly, too many have used freedom of the press as a weapon not only to strangle our free speech, but to erode and ultimately destroy the right to keep and bear arms as well. In doing so you promoted your profession to that of constitutional judge and jury, more powerful even than our Supreme Court, more prejudiced than the Inquisition's tribunals. It is a frightening misuse of constitutional privilege, and I pray that you will come to your senses and see that these abuses are curbed."

Alas, Heston's prayers have yet to be answered. While courts have recently bolstered Second Amendment rights, endangering gun owners in the name of free speech continues to be the blood sport of the Fourth Estate.

Two weeks ago, the Roanoke (Va.) Times published an online database of registered concealed handgun permit holders in the paper's community under the sanctimonious guise of "Sunshine Week." The database included both the names and street addresses of some 135,000 Virginians with permits to carry concealed weapons. Columnist Christian Trejbal patted himself on the back for making it easy to snoop on the neighbors: "I can hear the shocked indignation of gun-toters already: It's nobody's business but mine if I want to pack heat. Au contraire. Because the government handles the permitting, it is everyone's business."

Trejbal denied that compiling the concealed carry permit holders list was "about being for or against guns." But he exposed his true agenda when he compared law-abiding gun owners to . . . sex offenders: "A state that eagerly puts sex offender data online complete with an interactive map could easily do the same with gun permits, but it does not."

The Roanoke Times showed reckless disregard for the safety of the license holders and reckless disregard for accuracy. In his column, Trejbal admitted that he knew some of the information he had obtained was inaccurate -- but published it anyway: "As a Sunshine Week gift, The Roanoke Times has placed the entire database, mistakes and all [emphasis added], online at www.roanoke.com/gunpermits. You can search to find out if neighbors, carpool partners, elected officials or anyone else has permission to carry a gun."

After an uproar among gun-owners, including domestic violence victims licensed to carry, the Times finally decided to yank the database. Trejbal seems not to feel much remorse: "Did we make it easier [to obtain the information]? Yes. But it's still a public record." Let's review: He published a list he knew contained inaccuracies. His paper admits the decision endangered gun owners. He compiled a convenient shopping list for criminals -- and smacked law-abiding gun owners in the face with his comparison of their choice to exercise their rights with sex offenders.

Public disclosure of concealed carry licenses varies from state to state. Eighteen states protect permit holders' privacy from public view. Virginia is one of 17 states that make licensee records public. If information is public, does it make it right for a newspaper to publish it? The media exercise discretion all the time in withholding the names of minors or rape victims. Why should the privacy of law-abiding concealed handgun permit holders be treated with any less concern?

"The odor ripened when Bloomberg filed civil lawsuits against these gun shops, rather than turn over evidence to the proper authorities for criminal prosecution. Bloomberg's office refused to turn over that evidence, and instead the billionaire mayor launched a high-profile media campaign demonizing the targeted gun shop operators."

Bloomberg has, of course, earned the praise of the anti-Second Amendment media for his security-undermining stunt. The unholy alliance between Big Nanny politicians and journalists threatens us all.