The Left's Definition of a "Hero" 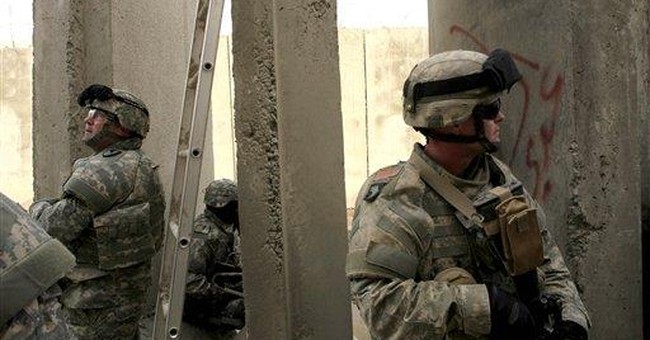 Angry, left-wing Washington Post blogger William Arkin considers American troops in Iraq who believe in their mission "mercenaries" who are "naive" and should be thankful they haven't been spit upon yet. Curdled Democrat Sen. John Kerry thinks those soldiers, who volunteer for service, didn't "make an effort to be smart" and are "stuck in Iraq" because of their intellectual deficiencies. At the last anti-war spasm in Washington, liberal peace-lovers vandalized a military recruitment office -- repeating an act of destruction taken by rock-wielding thugs across college campuses and at ROTC headquarters nationwide.

So, who inspires these troop-bashers? Whose courage do they cheer? Whom do they call "hero"?

Not the American soldier on the battlefield, willingly and freely putting his life on the line for his beliefs, his family, our country, security and freedom.

No, their idea of a military hero is Army Lt. Ehren Watada. Did Watada take a bullet for his comrades? Rescue innocent civilians from insurgent forces? Throw himself on a grenade? Ambush a terrorist sniper nest? No.

Watada's the soldier who went on trial this week for defying orders to be deployed to Iraq -- after volunteering for duty. For those deficient in English, here's the meaning of volunteer: "To perform or offer to perform a service of one's own free will." Hundreds of anti-war groupies, including actor Sean Penn, showed up to cheer Watada.

Watada was scheduled to leave Fort Lewis, Wash., for his first tour of duty in Iraq last summer. Instead of getting on the bus with his fellow soldiers, he announced he would not go and denounced the war as "unjust" and "illegal." He was the only military officer to refuse deployment to Iraq with Fort Lewis' 4,000-member Stryker Brigade. The anti-war propaganda machine kicked into full gear for Watada, with coordinated press conferences in Tacoma, Wash., and Honolulu, where Watada grew up.

Some of Watada's hometown neighbors are sick of his intellectual disingenuousness. Writing in Watada's hometown newspaper, the Honolulu Advertiser, retired Col. Thomas D. Farrell, who served as an Army intelligence officer in Iraq in 2005-2006, retorted:

"How can anyone seriously claim that our military involvement in Iraq is illegal when both Congress and the U.N. have taken the steps to authorize it, and allow it to continue to this day? Lt. Watada argues that he has the right to make his own personal assessment, notwithstanding whatever Congress and the U.N. may do. If he's right, why not make our personal assessments about how fast is safe to drive, or how much tax is our fair share? The answer is obvious: Anarchy would prevail, and the rule of law -- the basis of all real freedom -- would cease to exist."

The only thing illegal here is Watada's willful refusal to obey orders. Watada is just the latest in a line of losers abandoning their men, their mission and the rule of law. The left calls this "dissent." The rest of us call it what it is: Desertion.

Many military observers say they smelled a rat when they first heard of Watada's story. Watada graduated from Hawai'i Pacific University in 2003, joined the Army shortly after, went to Officer Candidate School and incurred a three-year obligation. Wrote Navy Officer Robert Webster:

"This guy graduated from college and then joined the Army, going to Officer Candidate school, after we had already started the Iraq campaign just to claim it was an 'illegal' war when his unit is called to go. Smells funny to me. In my mind, either the Army gave a commission to an idiot not aware of current events or he planned this all along."

Soldiers making calculated political statements against their own troops? Wouldn't be the first time -- cough, cough, John Kerry. Idiot or schemer, Watada deserves a stiff, strong penalty for his lawlessness. An excellent proposal put forth at the military blog Op-For (op-for.com):

"Relieve him of operational duties and send him to work at Walter Reed, to handle the in- and out-processing of wounded veterans."

Yes, where the real heroes are.