A CBS Story "Too Important to Ignore" 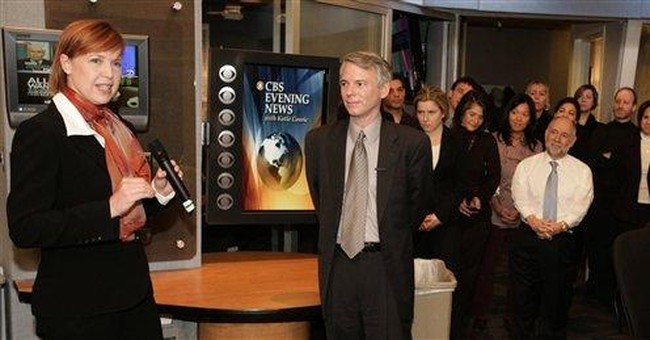 Let us contemplate some wisdom from a media ethics expert quoted by The New York Times this week:

"To most journalists, the notion of anonymous reporters relying on anonymous sources is a red flag. 'If you want to talk about a business model that is designed to manufacture mischief in large volume, that would be it,' said Ralph Whitehead Jr., a professor of journalism at the University of Massachusetts."

No, he wasn't talking about the Associated Press' (and the Washington Post's and the Los Angeles Times' and the New York Times') anonymous stringers relying on unnamed and unreliable sources reporting (or rather, rumor-mongering) on the war in Iraq.

No, he wasn't talking about the anonymous reporter identified only as "an Iraqi employee of The New York Times from Najaf" in three stories just this week, which quoted various unnamed Iraqi clerics, residents and officials.

No, Professor Whitehead was talking about the swiftly and widely discredited InsightMag.com story about Sen. Barack Obama, D-Ill., attending a madrassa as a child. Fox News Channel (for which I am a contributor -- see, transparency's not so hard) took a pounding for picking up the inaccurate story. The liberal media pile-on continues despite the network's immediate acknowledgement of error in repeating the false charges and despite the fact that Fox didn't originate the story.

Unlike, say, CBS News, Dan Rather and the faked National Guard memos.

Meanwhile, CBS News has another potential controversy on its hands involving unnamed sources that Professor Whitehead and The New York Times won't get around to flogging.

On the left-wing MediaChannel.org website, supporters of CBS chief foreign correspondent Lara Logan published a mass e-mail she had sent out asking for "help." She had filed a report on recent Iraqi and U.S. troop action along Baghdad's Haifa Street, but complained that it "only appeared on our CBS website and was not aired on CBS. It is a story that is largely being ignored." The report featured a masked "Haifa Street resident" who "blamed the fighting on the U.S." A CBS spokesman told BroadcastingCable.com that the story, which included footage of sprawled corpses of men in Iraqi Army uniforms, had been deemed "too graphic for an evening news audience."

This didn't mollify the correspondent-turned-activist, who asked her friends to send CBS a message that her piece wasn't "too gruesome to air, but rather too important to ignore." Logan has done much good work on the ground in Iraq, but her extra-curricular lobbying was a bit much even for some of her colleagues. "I think anything that happens internally should stay internal," the network's spokesman told BroadcastingCable.com.

What does deserve external airing, however, are Logan's glaring omissions from her online piece. Nibras Kazimi, a Hudson Institute scholar and blogger at Talisman Gate (talismangate.blogspot.com), took a close look at Logan's Jan. 18 report and recognized the grainy corpse footage "obtained by CBS." He says it matched an eight-minute video published online Jan. 7 by an al Qaeda propaganda arm under the title "Some of the Casualties of the Heretics in Haifa Street After Sunday's Fighting, January 7, 2007, in Baghdad." Indeed, many of the video images are identical.

At the time, Kazimi notes, "the Iraqi military claimed that some of its soldiers were cornered on Haifa Street and killed after running out of ammunition. This incident set off the subsequent battles there. Al-Qaeda also released written statements at the time taking credit for the initial phase of fighting. . . . The footage 'obtained by CBS' is identical to that put out by Al-Qaeda. But Logan makes no mention of Al-Qaeda's video and does not address the implication that the footage she used was off an Al-Qaeda video. And if it's not off the Al-Qaeda video, then how did she get footage identical to the one used by Al-Qaeda? This needs to be explained."

But "the most damning indication of journalistic incompetence," Kazimi blogs, is that "Logan makes no mention about the affiliation of these insurgents fighting on Haifa Street. Not even the slightest mention is made that al Qaeda is taking credit for the fighting there. On the contrary, the audience is treated to a blanket accusation by an anonymous civilian (wearing a headdress in the insurgent manner) denouncing the Americans and the destruction they've brought to bear on Haifa Street."

Was Logan a willing tool or an ignorant fool? Either way, the story is -- as she says herself -- "too important to ignore."