Afghanistan, Guantanamo Bay -- An Administration Without a Plan 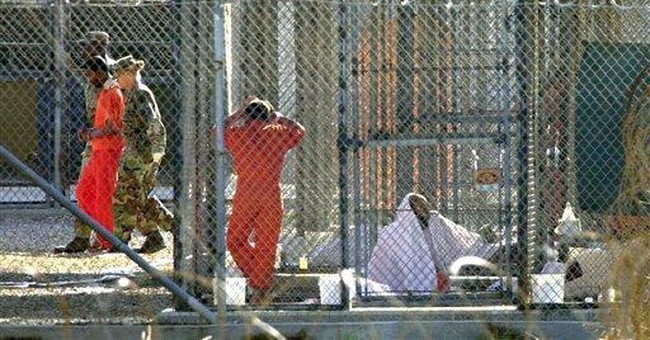 Over the last month our nation has focused a great deal of attention on Gen. McChrystal's substantial troop request for our mission in Afghanistan. This is the sort of matter which we should be talking about, because the debate between a counter-insurgency versus counter-terrorism approach, which is at the heart of this decision, is sure to set the tone for policies and missions well beyond the Afghan borders.

But as important as the debate is, Secretary Gates and field commanders are reminding us that there comes a point where the lack of action makes the decision for us. This troop request comes with a reasonable window of opportunity attached. The president's continued inaction on this front and his failure to come to a conclusion on a long-term strategy for our mission in Afghanistan creates uncertainty for our troops on the ground and puts into question our resolve in the ongoing war against international terrorists and those who aid and abet them.

However, another key component of our approach to combating terrorism and terrorists is also lingering without a conclusive plan and course of action -- the closure of the Guantanamo Bay detention facility and the handling of the remaining detainees. While the troop level debate has drawn all recent attention, this policy decision is also one with tremendous impact.

As you will recall, on Jan 22, 2009, President Obama signed executive orders regarding Guantanamo Bay, interrogation techniques and detention policies. One of the executive orders required that Gitmo be closed within a year. However, as the months passed, it has become obvious to all, including the administration, that such a timetable was unfeasibly aggressive. In fact, to date even some of the most basic aspects of closing the base remain undecided.

Whether the facility is closed by January 2010 or at a later date is not the only subject for discussion here. Rather, this quandary serves as yet another example of this administration's inability to set and execute effective strategies when it comes to our fight against terrorism. With a backlog of detainees waiting for trial and no clear plan on where to house them once the facility itself is closed, it is clear just how vital it was for the administration to come up with a comprehensive plan before pronouncing the closure of the facility.

Obvious as this it, it seems to have escaped the Obama administration, not just back in January, but even now, late in October.

On Tuesday, the administration achieved a minor "victor"' with the Senate's passage of an amendment to the $44 billion Homeland Security budget which will allow the government to continue to transfer detainees from the facility to the United States for prosecution -- with the very telling caveat that before any additional transfers take place, the administration put a plan in place.

Yes, you heard that right -- the Senate will allow terrorist suspects to come to the United States once the president actually comes up with a plan on what do with them once they are here.

No word yet on when just such a plan will be forthcoming. You can be sure I won't be holding my breath.

This past Monday, the city council of Standish, Mich. took the initiative by voting 6-0 in support of the city's willingness to proceed with plans that would allow the transfer of the remaining Guantanamo Bay detainees to the soon-to-be closed maximum security facility located in their small Midwestern town. Word is they would have passed the resolution even sooner had they not been trying so hard -- and failing -- to get straight answers out of Washington.

So while Congress passes measures allowing for transfer of detainees once a plan is developed and an administration asks to close the facility without any clear direction on how, at least we can count on the Standish City Council to take decisive action.

Perhaps once they have settled the matter of Guantanamo Bay, the town of Standish could help President Obama along by voting on a resolution concerning troop levels in Afghanistan. That is the type of decisive leadership that is certainly absent in Washington these days.