A Prize for Hope 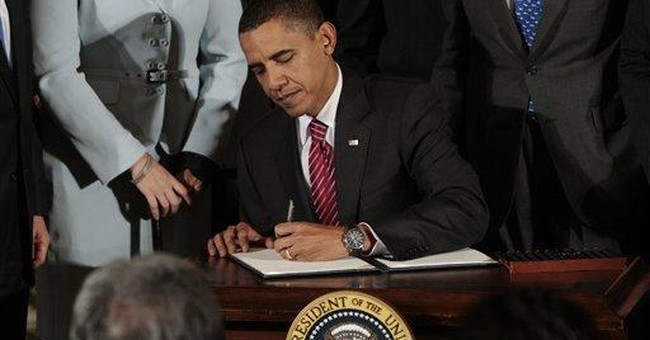 So much has already been said and written concerning President Obama's startling receipt of a Nobel Peace Prize this past Friday that I don't want to bore you with a regurgitated version of yesterday's news.

But with so many commentators and pundits, on both the left and right, raising understandable questions about the validity of conferring such an award on an American president who has been in office for less than a year and really accomplished so little.well, it's gotten me thinking. As a country, we have had many successful past American presidents who have had such a significant, positive impact on the course of global affairs -- too many of whom are no longer seen relevant or historically noteworthy, but from whom we must learn.

According to Alfred Nobel's will, the prize for peace was to be awarded to the person who "shall have done the most or the best work for fraternity between nations, for the abolition or reduction of standing armies and for the holding of peace congresses." Given that, we can only assume that Mr. Nobel intended the award be given to those who have achieved tangible accomplishments and invested considerable effort, not merely talked of the goals of peace.

When compared to the policy aims of past presidents -- including my father, who made nuclear arms reduction and eradication a centerpiece of his presidency and beyond -- current political chatter seems so broad. And when compared to the foreign policy successes of Ronald Reagan, who personally bridged the coldest of barriers to halt a spiraling nuclear arms race and aggressively confront the Red armies of oppression, the current political discourse looks little more than hope without substance.

Ronald Reagan was successful not because of his strong opposition to nuclear weapons, but because he backed that opposition with real pressure on the rest of the world -- pressure marked by action. He was able to walk into the 1986 Reykjavik negotiations with the Soviets and tell Gorbachev that a 50 percent reduction in weapons was insufficient and that together they needed to work for the complete elimination of all nuclear weapons. And then Reagan was able to walk out of that meeting and bring to bear all the needed economic, military, social, and political pressure. The next year Ronald Reagan and Mikhail Gorbachev signed a treaty which abolished an entire category of nuclear weapons, an unheard-of agreement.

If President Obama is going to live up to this premature award, this is the legacy he must meet and strive to surpass. He has said he accepts this award as a call to action, and this is exactly what it must be. We no longer face the threat of Soviet hegemony, but rogue states such as Iran and North Korea present genuine threats and must be countered not only with calls for nuclear reduction, but with steady determination and overwhelming strength.

Just today, Russian Prime Minister Vladimir Putin called talk of Iranian sanctions "premature," signaling yet another wrinkle in the global posture towards Iran. Negotiations and diplomacy are crucial to any effort. My father, who opened frank negotiations with the Soviets, knew that better than most, but he also knew that we can't be seen as willing to let negotiations fail should the resistance prove too strong.

As for the Nobel, thankfully my father understood that most political awards were nothing more than philosophical beauty pageants. Rather, he knew that action and results were the true measure of an individual, a presidency and a nation. Time and experience will show the measure of President Obama.