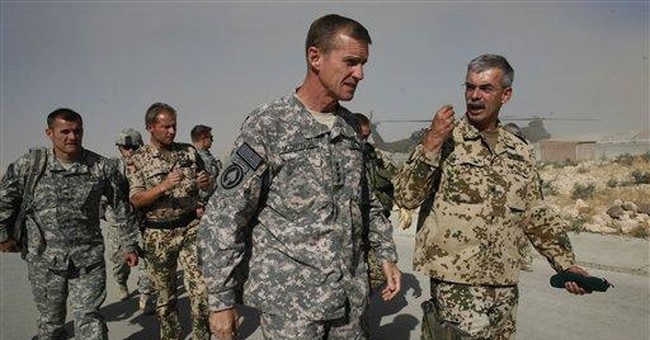 Gen. Stanley McChrystal, President Obama's personal choice to lead U.S. and coalition forces and operations in Afghanistan, has officially made a request for between 30,000 and 40,000 additional troops. He asserts that without this troop infusion, we run a very real risk of failing to meet our military objectives in Afghanistan, failing to defeat the Taliban and Al Qaeda, and ruining the hope of providing a stable enough atmosphere that the Afghan military and police can eventually assume control of their internal security and defend against external threats.

McChrystal is not alone in this request. Gen. David Petraeus, the brilliant architect and manager of the United States' successful "surge" in Iraq who now commands United States Central Command, has attached his name to the growing list of supporters for the troop increase request. The Chairman of the Joint Chiefs of Staff, Adm. Mike Mullen, has also indicated that more troops will be needed to avoid failure in Afghanistan.

Avoiding failure on this front is a non-negotiable. Such a failure, in both military and political terms, would be catastrophic to American interests at home and abroad. Such a scenario would likely include a revitalized Taliban and Al Qaeda that are ceded strategic territory in which to thrive, train and plot. And just as importantly, it would give these murderous thugs the type of public relations victory they have been seeking since the September 11 attacks -- similar to their failed effort to bog down and cause a hasty retreat of U.S. troops in Iraq.

President Obama, it is time to listen to your field generals over liberal Washington politicos, just as you did in February of this year when you approved an initial increase of 21,000 troops. President Obama, it is now time to give Gen. McChrystal the troops he needs to get the job done.

There is no doubt that sending our brave men and women into harm's way is one of the most difficult decisions a president has to make. No one should criticize the president for taking a few weeks to thoroughly review this latest request -- especially in light of our numerous obligations throughout the globe which have stretched our troops and their equipment quite thin recently. A troop increase of this magnitude requires consideration and long-term planning.

However, in this case, I am concerned that the president is weighing not only the military calculations, but that, due to his political party's internal politics, he is also being forced to weigh the intra-Democratic Party political consequences of his decisions at a time when liberal voters, interest groups and political operations are gearing up for the critical 2010 mid-term elections.

President Obama owes much of his success in the primary elections to his early opposition to the Iraq War, and the loyalty that gave him from the anti-war left. Now some of that block are trying to collect on a conflict where not long ago President Obama told us, "the world cannot afford the price that will come due if Afghanistan slides back into chaos."

Vice President Biden has also been in his ear opposing the troop level recommendations. Speaker Pelosi and the lead Democratic Senator on the Armed Services Committee have both stated their strong opposition to any additional troops. Some have even started to talk of a timetable for withdrawal.

There are no easy decisions when waging a war. Right now though, President Obama has personally talked with the commanding officer in Afghanistan only once in the 70 days Gen. McChrystal has been in command, and I can guess how that stacks up against conversations with his party's vocal left-wing. There may not be easy decisions, but the best decision our president could make right now is to turn that ratio inside out so that he can start making the right decisions to win this war and bring our troops home with victory.

Here's How You Know Democrats Rigged and Stole the 2020 Election
Townhall
'Happy Birthing Person's Day'! Ben Shapiro's 'Mother's Day' message mocks social justice dopes and it's HILARIOUSLY perfect (Ted Cruz assist!)
Twitchy
Can We Put Pelosi out to Pasture Already for What She Just Did to Willie Mays?
Redstate
Homeless Camps Are Taking Over the West Coast
PJ Media