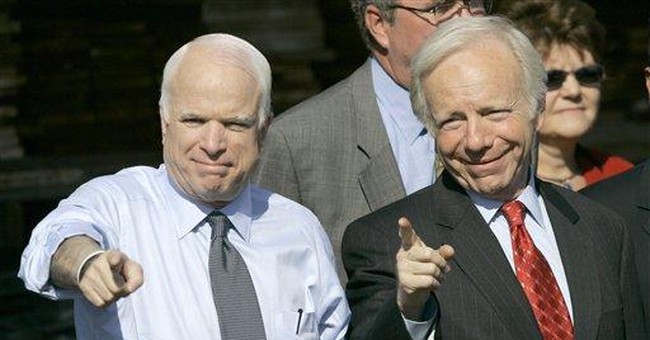 Barack Obama is president-elect of the United States because the Republican Party and John McCain handed him the presidential election on a silver platter.

George Bush allowed the Republican Congress to overspend in the first six years of his administration without once using the veto pen, blindsided the conservative Republican members of Congress on many occasions, and walked away from the base of his party on immigration reform and other issues such as Medicare and No Child Left Behind.

Finally, the coup de grace was Dick Cheney's endorsement of John McCain in the waning days of the campaign, which gave Barack Obama the final nail to put in the coffin of McCain's campaign, which was striving mightily to distance him from the Bush administration.

The McCain campaign was a campaign out of the 20th century, while the Democrats were running a campaign in the 21st century.

John McCain wouldn't stand up against the Democrats in Washington D.C. on the Fannie Mae and Freddie Mac scandals, against expanding government, a $700 billion bailout, and going against the traditional values of conservative Republicans.

The economic collapse was the Democrats' fault. Yet John McCain never bothered going after them on that. He let the burglars walk away with the loot because those were his friends, and with George Bush failed to point the finger of blame at the people who caused the financial collapse that has plunged the nation into a certain recession. Bush had the bully pulpit but failed to use it, and the Democrats walked away scot-free.

Shockingly, John McCain failed to use the most potent weapon in his arsenal -- the culpability of Barack Obama and his friends in the wholesale looting of Fannie Mae and Freddie Mac that led to the current debacle. McCain had the goods, but wouldn't exploit them.

John McCain lost because of his lack of a clear message. He needed more than the fact that he is a maverick. His answer to the economic crisis was a $300 billion bailout for delinquent mortgagees. He was offering welfarism, while Barack Obama was offering socialism.

People laugh at me when I tell them the difference between Republicans and Democrats is that Republicans take a week longer to embrace communism.

This was not a referendum on Ronald Reagan. As a matter of fact, my dad might well have voted for Barak Obama just based on what he was seeing his party doing.

Finally, I hope that when Barack Obama was making elaborate and extravagant promises about what he was going to do, he was flat-out lying.