Pinning the Tail on the Donkey 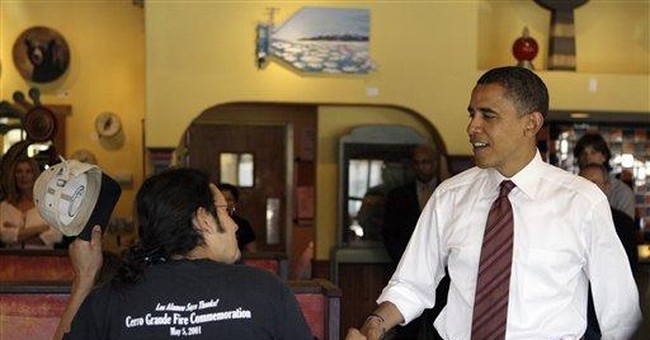 When I was a little boy we used to play a game where we wore a blindfold and tried to put a slip of paper on a drawing of a donkey we couldn't see. I thought of that as I watched the chattering class, blindfolded and frantically trying to pin the blame for the Wall Street debacle on everything but the real donkey, the Democrats, whose symbol is. guess what?

Right, a donkey, and that's where the blame lies, on Barack Obama's Democratic Party.

To find the donkey you need to go back to the Clinton administration, which decided that everybody and his kid brother was entitled to a mortgage even when they didn't begin to qualify for a home loan.

In saner days, banks designated certain areas as no-loan zones - depressed neighborhoods where lending money to potential home buyers was not just a risky investment, but a certain future foreclosure. Critics of the practice called it "redlining" and President Clinton and his chums on Capitol Hill decided that banks should no longer act like banks and lend money only to home buyers who could afford to handle the monthly payments. Now all bets would be off and people not the least bit creditworthy -- and speculators -- would be entitled by law to obtain mortgages even when it was obvious they couldn't afford to handle them.

Enter those now infamous quasi-government banking instruments known as Fannie Mae and Freddie Mac, which poured fresh money into the banking system by buying mortgages from banks. Over the long haul they managed to load up their portfolios with billions upon billions of dollars of risky mortgage paper that banks had been forced to offer and then dumped on them.

The scandal of Fannie Mae and Freddie Mac dwarfs the Enron debacle. In Enron, people went to jail. With the Fannies, some just walked away with millions.

The collapse of Lehman Brothers can be blamed on Fannie Mae and Freddie Mac, the two big mortgage banks that the Feds recently bailed out with big bucks. As Fox News has pointed out, they used huge lobbying budgets and political contributions to keep regulators off their backs.

According to the Center for Responsive Politics, the top three U.S. Senators getting big Fannie and Freddie political bucks were Democrats, and No. 2 was Sen. Barack Obama, who as Fox noted had only been in the Senate four years but still managed to grab that No. 2 spot ahead of longtime colleagues John Kerry and Chris Dodd, the chairman of the Senate Banking Committee.

Obama brazenly blames John McCain and the GOP for the current Wall Street mess when it's clear none of it was due to Republican policies. The truth of the matter is that it was McCain and three GOP colleagues who sought to reform the government's lending policies three long years ago after the Bush administration had failed two years earlier. On May 25, 2006, McCain spoke on behalf of the Federal Housing Enterprise Regulatory Reform Act of 2005, and warned against the debacle we are now facing if it failed to pass.

He told the Senate that a report by the Office of Federal Housing Enterprise Oversight charged that "Fannie Mae employees deliberately and intentionally manipulated financial reports to hit earnings targets in order to trigger bonuses for senior executives."

McCain warned, "If Congress does not act, American taxpayers will continue to be exposed to the enormous risk that Fannie Mae and Freddie Mac pose to the housing market, the overall financial system, and the economy as a whole."

McCain predicted the entire collapse we now are suffering through. He stressed the falsification of financial records to benefit executives, including Obama advisers Franklin Raines and Jim Johnson.

Now Obama has the nerve to try to pin the blame on McCain and the GOP when the facts show that the blame must be pinned on the Democratic donkey.