A Culture War of Words 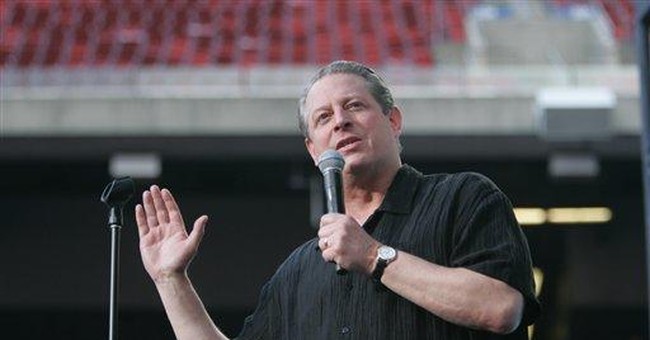 If anybody doubts America is engaged in a culture war and losing it they need only to take a look at the series of concerts promoting Al Gore’s global warming hoax last weekend. They would have learned that the war is being waged in the sewers.

As those who made the mistake of watching any of these concerts here or abroad discovered, the enemies of culture are unable to complete a sentence without using the “F” word at least once, along with liberal sprinklings of the “S” word.

And their foul-mouthed rhetoric was not the least of it: the audiences ate it up and the performers knew that when they spewed their obscene filth they were giving their decadent fans exactly what they wanted.

That fact has not escaped the people who run the nation’s TV networks; nowadays it’s hard to find a TV drama that does not seed the dialogue with “F” words. If you have watched hit series such as “Deadwood” you quickly learned that the “F” word was among the milder epithets. That series introduced terms never before heard outside of men’s locker rooms or prison cells.

I went to a lot of concerts years ago. I never heard Frank Sinatra or any other performer use a single obscenity during their performances. Moreover, if any of them had uttered anything as foul as the “F” word, they would have been driven off the stage.

If you think I’m making too big a thing about the incredible degradation of language, keep in mind it represents the decline in the level of civility since the culture warriors declared war on decency. The widespread use of the “F” word is a symptom of the disease.

The America in which I grew up had standards, and people’s public behavior was judged by how well they measured up to those standards. One was expected to toe the line when it came to the way they communicated with one another. We were expected to show our respect to our fellow Americans by avoiding offensive words. Once upon a time one was expected to be a gentlemen or lady, and those terms -- now treated with scorn -- described people who had the utmost of respect for those around them and showed it in their everyday behavior.

Those who deviated from the accepted standards were told to “keep a civil tongue in your mouth.”

That’s no longer true. Comedians vie with each other to use the most extreme obscenities and sexual innuendos. What was once called “street language” is now considered normal discourse. Things once considered sacred are now seen as commonplace. Sex is no longer an expression of love between a man and a woman – today it’s seen as recreation, like a game of golf, to be portrayed on stage and screen without restraint.

In any civilization that desires to survive, simple decency and courtesy are crucial elements. In a society headed for the sewer, anything goes. And when anything goes -- when the most extreme forms of language and behavior come to be seen as normal -- civilization is transformed into barbarism.

That’s what’s at stake in the culture wars. A society bereft of standards that demand civilized behavior among its people is a society where the individual is deemed worthless as being anything but a consumer for the degraded wares of the smut peddlers and a source of income to pay for the schemes of those who sell Marxist snake oil such as global warming as a means of subjugating the populace.

And the more addicted to slime that populace becomes, the easier it is to subjugate them.