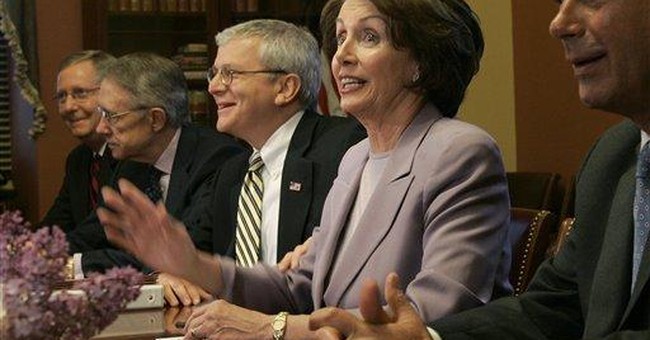 He’d have good reason. Some of the people running things today would steal the pennies off a dead man’s eyes, and then claim they needed it to make everybody’s life better.

Look at the current furor over the (fortunately) now-dead Comprehensive Immigration Reform bill, sold so deceptively it would shock the worst snake-oil salesman.

Last year’s attempt to enact a similar bill failed, so the powers-that-be decided to make another try of imposing this ill-begotten piece of legislation on the nation. Under the leadership of the feckless Sen. Harry Reid, the supporters got together and tossed out all the Senate’s time-honored procedures by crafting the bill not in committee but in secret, behind closed doors, and then sought to ram their 800-page bill down the throats of their fellow senators before any of them had a chance to study it.

Standing on the floor of the Senate, Sen. Jim Bunning, R-Ky., said: “Here we go again. Three weeks ago a significant majority of the Senate rejected this flawed immigration bill and the flawed process that lead to it. But now it is back. It just won’t go away.

“One of the key reasons the bill failed the first time around was the flawed process, or the lack of process, that led to the bill. In the Senate, an idea normally takes months if not years to become a bill and pass. But instead of letting the bill develop through a deliberative process, a few Senators wrote the bill in secret. They held no committee hearings. There was no committee report. In fact, Senators did not even see the actual bill until several days into the debate.”

Bunning, a storied member of the Baseball Hall of Fame, threw a strike across the plate when he noted that “the Majority Leader is taking an unprecedented step to shut off the rights of Senators to debate and amend a bill. That is not the Senate.”

The bill died, but not because the powers-that-be wanted it to, but because the vast majority of Americans wanted it dead. They had the good sense not to trust the powerful forces behind it and they prevailed because trustworthy men such as Jim Bunning stood with them.

We’ll need men like Jim Bunning to stop another deceptive measure the liberals now running the Congress from depriving us of our freedom of speech.

Left-wingers in the Congress such as California’s Sen. Diane Feinstein and Massachusetts Sen. John Kerry want to put a muzzle on conservative talk radio. They are upset by the fact that millions of Americans listen to people like Rush Limbaugh, Mike Savage, Laura Ingraham and me. Like the immigration bill backers, they want to shut off all debate, this time for good.

Because only a tiny handful of Americans listen to liberal talk radio, Kerry and company claim they want to level the playing field by imposing a rule that will make it impossible for talk radio to survive. Should their so-called “fairness doctrine” be revived, radio station owners would be so restricted they would not be able to program conservative talk radio and keep their licenses.

Every time a conservative talk show host said something the liberals didn’t like, the station owners would be forced to find a liberal and put him on the air to reply.

The liberals want to follow the lead of their fellow Marxist, Venezuela’s Hugo Chavez, who simply takes over any opposition TV stations and turns them into his propaganda outlets

Bear in mind that these are the same people who never stop talking about how much they love free speech, as long as those who practice it agree with them.

They lie about their devotion to free speech, but they want us to trust them when they try to stifle all opposition.