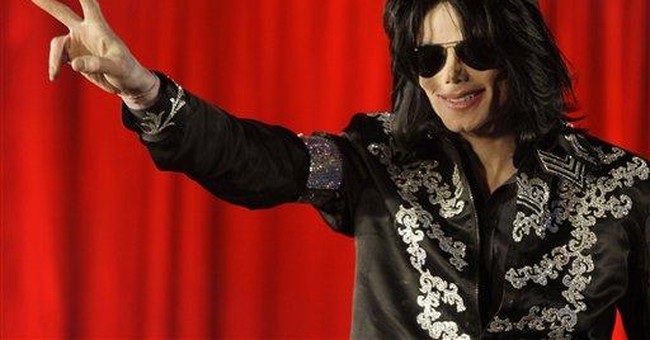 Oscar Levant, a famous pianist and media star of the 1930s and ’40s, battled for decades against mental illness, surviving several painful hospitalizations. He once declared: “There is a fine line between insanity and genius. I have erased that line.”

The late Michael Jackson erased the same line—and blurred many other distinctions in the course of his extraordinary career.

In an unprecedented way, he obliterated the dividing line between black and white in terms of personal identity and mass appeal. He developed a vast crossover audience of white fans (and international fans in every continent), at the same time that his changing complexion and mutilating plastic surgeries obscured his African-American origins.

He also blurred the distinction between male and female, straight and gay. His public appearances blended macho hip thrusts and crotch-grabbing with a soprano singing voice and mincing, effeminate speech in interviews. His sinuous athleticism struck the whole world as undeniably sexy, but it involved a polymorphous sexuality untethered to any known gender.

Finally, and most poignantly, he shattered distinctions between adult and child, trying desperately to hold onto the image of boyish innocence, of prepubescent playfulness, long after he had entered middle age. He became fixated with Peter Pan—the boy who never grew up—and named his personal estate “Neverland” in honor of his role model. The reconstructed Disneyland rides, the chimpanzee companion, and the creepy (and allegedly criminal) sleepovers with unrelated children all reflected his desire to define himself as an eternal child rather than a mature and powerful pop star.

In a sense, the allegations of child molestation represented the dark side of all of MJ’s blurred distinctions: he surrounded himself with children of all races and complexions, with pre-teen boys, not girls, and refused to see anything inappropriate of treating children decades younger than himself as his precious personal “playmates.”

In a sense, his fixation with children may have connected with the normal childhood he never had. He became a world famous performer at such a young age that he never experienced a stress-free or innocent period of growing up. Much of his bizarre behavior could be understood as an effort to enjoy an idealized, spoiled and perfect childhood when it was, sadly, much too late.

There’s also an odd parallel in his story to the most acclaimed American movie of them all—“Citizen Kane.” While the fictional press baron Charles Foster Kane (obviously based on the real-life William Randolph Hearst) poured much of his fortune into his exotic and eccentric estate, “Xanadu,” Michael Jackson lavished untold hundreds of millions into his similarly peculiar “Neverland Ranch.” Both estates featured private zoos of unusual animals. Like Kane, MJ won widespread admiration for his youthful achievements, but then became better known for his quirks, idiosyncrasies and scandals. For his last word, Citizen Kane pronounced “Rosebud,” connecting him with the sweet joys of a distant childhood; Michael Jackson, touring the world from his earliest years, experienced those joys only in his imagination or his unfulfilled longing.

The connection with Elvis of course deserves notice and mention. Not only did MJ wed (briefly) The King’s only child, but his career followed the same trajectory: with undeniable talent leading to worldwide adulation, followed by a sad, self-destructive decline (which did little to diminish the ardor of their fans). In both cases, sudden and shocking death put short the hopes for a promised comeback.

Despite the depressing circumstances of his demise, Elvis Presley enjoyed even greater popularity and profitability after his death, and the same result is likely for Michael Jackson. Graceland became something of a national shrine, and it’s likely that Neverland will also turn into a pilgrimage destination. As with The King, the premature and startling death of The King of Pop will function to turn a mostly pathetic story into a truly tragic one—another distinction that the great performer has posthumously blurred.