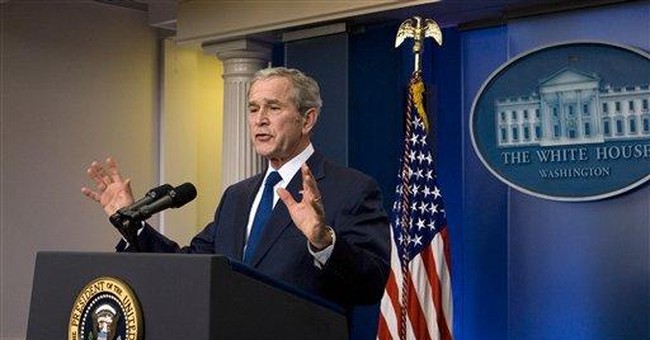 As he prepares to leave the White House after eight monumentally eventful years, what's the right standard for judging the performance of George W. Bush?

The basis for answering that question has changed radically over the course of the last seven years, very much to the president's detriment.

After the devastating attacks of September 11, 2001, and Bush's almost instantaneous rebirth as a determined "War President," most Americans expressed clear ideas of what they expected of the commander in chief. The conventional wisdom of the time declared that his presidency would rise or fall based on his ability to keep the nation safe. If the United States sustained a series of crippling new attacks the world understood that history would judge Bush as a failure. If, against all odds, he succeeded in turning the tide against our terrorist adversaries and managed to keep the nation secure from homeland assaults, then the president would emerge from his terms of office as a successful, and probably heroic, chief executive.

The concentration on the Iraq War after March of 2003 altered the criteria for evaluating the Bush Presidency. The conflict in Iraq, like all wars, proved messy, unpredictable, frustrating and often mishandled. For better or for worse, the American people identified the struggle as the defining gamble of the Bush administration and leading commentators declared that the president would provoke either contempt or gratitude based on the outcome of that war. If the United States failed in its mission of establishing a durable, pro-western government in Iraq, Mr. Bush stood no more chance of a favorable judgment by history than did Johnson or Nixon after the collapse of the U.S. investment in Vietnam. If, on the other hand, Mr. Bush defied the fanatical anti-war (and often anti-American) protesters and all the media nay-sayers, and somehow managed to produce a positive outcome in Iraq, then that alone seemed to guarantee a positive verdict by posterity on his presidency.

Despite all the passion and confusion surrounding this issue, numerical measures at the end of 2008 provide an undeniable indicator of the spectacular turnaround in Iraqi affairs and the level of the president's historic success. Since the beginning of the war, the New York Times called on Jason Campbell and Michael O'Hanlon of the liberal-leaning Brookings Institution to gather statistics for a series of presentations under the heading, "The State of Iraq: An Update." In December, they presented numbers comparing the situation in November, 2008 with November, 2006. US troop deaths, for instance, went down to 12, from 69 two years before (and from 137 in November, 2004). Iraqi Security Forces deaths went down from 123 to 27. Iraqi civilian deaths from the war plummeted at a similar rate—from 3,475 to 500.

Non-military figures also indicated impressive progress. Electricity production (in average gigawatts) increased in two years from 3.7 to 5.1 (and well above its pre-war rate of 4.0 under Saddam Hussein). Oil production (in millions of barrels per day) rose from 2.1 to 2.4, with exports soaring from 1.4 to 1.9 (and contributing to the decline in global oil prices). Most significantly, the Brookings measure of "Political Progress Achieved" (reflecting 11 "Iraq Index" criteria) surged in just two years from 0.5 to 7. As the authors declare: "On the whole we feel that the Iraqi government has met 7 of the 11 "Iraq Index" benchmarks we have laid out, which include steps like establishing provincial election laws, reaching an accord on sharing oil revenue and enacting pension and amnesty laws….As 2008 and the Bush presidency conclude, Iraq has settled into a kind of violent semi-peace. The population-protection strategy initiated by Gen. David Petraeus has been a remarkable success on balance. Its logic continues even though American force numbers in Iraq have nearly returned to pre-surge levels."

Even President-elect Barack Obama has acknowledged this recent and unexpected turnaround, despite basing his early primary campaign almost entirely on his opposition to a war that is now clearly succeeding. The universal expectation in Washington suggests that Obama will follow the Bush time-table for the further draw down of U.S. forces, meeting the current administrations commitments under the Status of Forces agreement, rather than imposing the arbitrary (and unconditional) withdrawal he promised in his campaign.

Of course, arguments will continue to rage over the price paid to achieve the undeniable progress in Iraq. Opponents of the war suggest that the removal of Saddam Hussein, while a positive development for the world, in no way justifies the lavish expenditure of American blood and treasure.

In truth, however, media accounts greatly exaggerate the human cost of the war through the failure to provide an appropriate context in recent history. While every military death constitutes a profound tragedy for the families of the fallen and the nation at large, the level of sacrifice in Iraq and Afghanistan has remained remarkably (and blessedly) low when compared to tragic losses under recent "peace-time" presidents. In fact, measuring the number of annual military deaths (most of them through accidents and illness, rather than combat) since 1980, the toll for the Bush administration remains sharply below the 28 year average. Final numbers are not yet available for 2008, but total military deaths under eight years of President George W. Bush will total below 12,000. The comparable number for eight years of Ronald Reagan (with no major war or military campaign) was 17,201. The eight years of Bill Clinton claimed 7,500 military lives.

The single worst year of the Bush presidency saw 1,942 active-duty fatalities from all causes – including hostile action, accidents, illness, homicides, and suicides. Thus compares to 2,392 deaths in the last year of the presidency of Nobel Peace Prize-winner Jimmy Carter. In fact, more military personnel died from accidents in that one year under Carter than perished from combat and terrorism in any year under Bush.

In short, this President clearly succeeded in both undertakings most often cited as the make-or-break challenges for his presidency – keeping the nation safe from new terror attacks and achieving his announced war goals in Iraq.

Why, then, does he leave office with historically low approval ratings and mainstream media deriding his presidency as "disastrous," "incompetent," "embarrassing" and "a fiasco"?

The obvious answer echoes James Carville's famous slogan for the Clinton campaign of '92: "It's the Economy, Stupid." With near-universal agreement that we face greatest financial crisis since the great Depression (another misleading and exaggerated evaluation, by the way) the President inevitably takes the blame. Bush and his advisors seemed utterly unprepared for the disastrous breakdown of the banking system, and signed on to a meaningless, ineffective and hugely wasteful "stimulus package" promoted by the Democrats who dominate Congress. After six years of steady, robust economic growth, the final year of the Bush presidency saw gut-wrenching increases in the unemployment rate combined with similarly alarming declines in the value of U.S. investments. The deficit (well below the post war average as a percentage of our gross domestic product) nearly quadrupled in the last budget prepared by Bush, and promises to rise to even more alarming heights under Barack Obama.

But while 2008 certainly witnessed an avalanche of bad economic news for President Bush, it's worth nothing that pronouncements that he represented the nadir of incompetence and wrong-headedness, and "the worst president in American history," long preceded the current economic crisis. Impassioned Bush-bashing reached feverish levels even during the President's most successful years (including his solid re-election victory in 2004). In fact, tracing the sorry history of "Bush Derangement Syndrome," it actually began before he even took the oath of office, and stemmed from indignation of the purportedly "stolen" election of 2000. For his most determined critics, George W. Bush always represented the "Commander in Thief" and an unworthy occupant of the nation's highest office. They always derided him as a slacker, a dunce, a religious fanatic, and a bumbling tool of malevolent forces bent on imposing some narrow-minded theocratic rule or a cultic New World Order.

These paranoid charges should dissipate in the face of the obvious fact that the president hands over a nation that maintains untrammeled freedom of religion (and of non-belief), with constitutional guarantees intact (and more assured because of the presence of Roberts and Alito on the Supreme Court), and with sovereignty proudly undiminished by submersion into any globalist conspiracy.

The most sensible standards for judging George W. Bush remain the criteria most frequently discussed during his presidency: the imperative of protecting U.S. security and achieving the primary war aims in Iraq. Those benchmarks should impress and influence the evaluation of future historians, who will look upon the departing president far more generously than most of his sullen and ungrateful contemporaries.