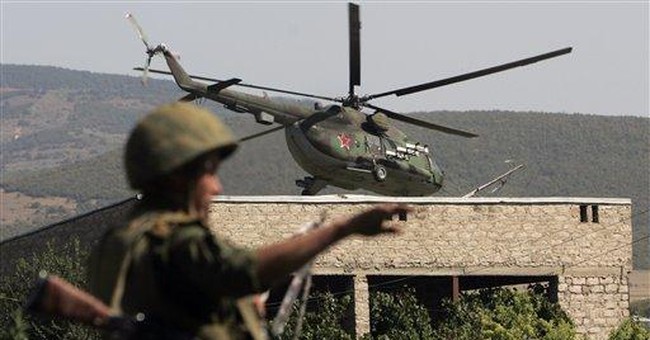 Why do conservatives and liberals respond so differently to the current war in Georgia?

The answer to that question exposes the great political divide separating left and right, Democrats and Republicans, in today’s America. The stark contrast between Barack Obama and John McCain at this weekend’s televised Civil Forum at California’s Saddleback Church further underlined the vast gulf in worldviews when it comes to injecting moral standards or arguments into politics.

Conservatives approach every challenge with a determination to approach the question (as far as possible)as a choice between right and wrong, good and evil. Liberals, on the other hand, look for nuances, subtleties or extenuating circumstances. They feel reluctant to denounce any action or position as unequivocally wrong, or to endorse any alternative as quintessentially right.

Those who take their inspiration from Ronald Reagan enthusiastically embrace moral absolutes; those who admire Jimmy Carter, Bill Clinton or Barack Obama feel uncomfortable with terms like good and evil when applied to politics and world affairs. Republicans relish crisp black-and-white when drawing distinctions; “progressives” feel an incurable fondness for shades of gray. On foreign policy, social issues, even the economy, the right wants to take sides and to make sure the good guys win. The left, on the other hand, seeks to split the difference among warring interests in behalf of a “can’t-we-all-get-along” vision of moral equivalency.

When John McCain responded to the invasion of Georgia with a full-throated, unequivocal denunciation of Russian bullying, Barack Obama’s top foreign policy advisor, Susan Rice, condemned the Republican nominee for “shooting from the hip” and “complicating” the situation. Her criticism echoed the sentiments of nervous 1980’s liberals who slammed President Reagan’s “simple-minded” and “destabilizing” characterization of the Soviet Union as an “Evil Empire.”

In contrast to The Gipper’s famous courage and clarity, Obama offered a mild and even-handed initial response to the attack on Georgia calling on both sides, amazingly, to “show restraint and to avoid an escalation to full-scale war… All sides should enter into direct talks on behalf of stability of Georgia.” To him, in other words, the bloody attack and brutal occupation of a sovereign state represented some sort of misunderstanding, an unfortunate break between rivals of more or less comparable guilt and legitimacy. His feeble response to the most menacing Russian maneuver in a generation recalls the leftist insistence of moral equivalence between the U.S. and the U.S.S.R. at the height of the Cold War. Yes, the Soviets might murder millions and oppress hundreds of millions of Eastern Europeans, but America had no right to respond because we sanctioned segregation in our own southern states or supported corrupt dictators in Latin America.

When conservatives insisted that the struggle between the superpowers still represented a conflict between good and evil, they never claimed that America counted as flawless and pure, or that the Soviet Union possessed no virtues at all (after all, they sustained a formidable ballet company). The Bible informs core western concepts of right and wrong, but even Holy Scripture features heroes with prominent flaws and shortcomings (like King David, Samson, even Moses and Abraham) who nonetheless champion goodness and righteousness against the vastly more cruel and corrupt forces arrayed against them.

Fortunately, the Good Book reports no liberal interest groups of antiquity who insisted on defending the civil rights of Philistines or Amalekites, or demanded respectful consideration of Pharaoh's heartfelt arguments against freeing his slaves, or championed a compassionate, multicultural outlook that defended the time-honored, distinctive Roman tradition of treating religious dissenters to crucifixion and mutilation.

Liberals have alienated countless ordinary citizens by their promiscuous deployment of sympathy – expressing compassion and understanding for foreign nations and domestic criminals who don’t deserve their concern in any way. The persistent suspicion that leftists count as “soft on crime” comes from their noisily expressed 1960’s solicitude for imprisoned perpetrators above the victims of violence – much as today’s liberals seem vastly more worried over the welfare of the anti-American fanatics in Guantanamo than they are for the heroic counter-terrorism fighters who keep us safe. It’s not entirely fair to say that the ACLU and its acolytes hate America, but it does seem that they feel no more loyalty to their own country than they do to its most implacable enemies.

In any event, the moral obtuseness of the left remains apparently incurable, resulting in the stubborn refusal to draw distinctions between good guys and bad guys at home or abroad, or to acknowledge that the decent or indecent behavior of nations or individuals must dictate the reward and respect they receive.

This same refusal applies to economic policies, where the redistributionist rhetoric of the Obama camp demands financial and standard-of-living guarantees disconnected from an individual’s hard work, productivity or moral worth. Unfortunately, the instinctive liberal reluctance to take sides between the righteous and the rotten doesn’t mean a non-interventionist, hands-off approach to economic policy. On the contrary, the left favors aggressive governmental involvement to punish – or at least question – material success. To progressives, that success counts as an indication of unfair advantage, rather than the result of productivity and job creation. A society becomes rich only if its members create wealth, but the left views such accumulation of resources as suspect and dangerous. Liberals want economic intervention not to protect or reward virtue, but to restrain the natural consequences of virtuous behavior such as disciplined work, patient saving, stable family formation, and entrepreneurial risk-taking.

Instead of glorifying the business people who sustain communities and provide jobs, liberals try to show their compassion by sanctifying the homeless – a population overwhelmingly categorized by substance abuse, criminality, and untreated mental illness. The aggressive insistence that government should champion the unfortunate doesn’t amount to the application of a moral calculus to political questions but, rather, the refusal to consider moral standards. The left looks for the least powerful or successful as the only appropriate recipients of governmental favor – considering only status (the more hapless the better), not virtue or vice.

The Democratic Senator dodged uncomfortable questions about marriage – declaring that he defined marriage “as the union between a man and a woman” but never explaining his opposition to a California initiative that supports that definition, or his commitment to repeal the Defense of Marriage Act (signed by President Clinton) that applied the same standard at the federal level. When it came to abortion, Obama allowed that “there is a moral and ethical element to this issue” but said nothing at all about what that “element” might be while insisting, “I am pro choice.”

Most tellingly, when asked by Rick Warren about how to deal with evil (“Do we ignore it? Do we negotiate with it? Do we contain it? Or do we defeat it?”), Obama refused to answer, saying only that evil should be “confronted.” His examples of evil – Darfur, street crime and child abuse in America – pointedly excluded the transcendent depravity of Islamo-Nazi terror, which turns the murder of children, and the suicide of other children, into holy acts.

Instead, he seemed to suggest that the United States should feel guilty about its own evil deeds, committed on behalf of good intentions, saying it’s “very important for us to have some humility in how we approach the issue of confronting evil, because of a lot of evil’s been perpetrated based on the claim that we were trying to confront evil.” In other words, Obama takes us back to the tired old moral equivalency arguments of thirty years ago, recycling a familiar plot from any number of acclaimed gangster movies – with the crusading cop becoming just as compromised and vicious as the criminal he’s determined to bust.

In real life, as in cinematic fiction, shades of gray occasionally do predominate, making it difficult to separate right from wrong, or to distinguish between good guys and villains. But on other occasions – most occasions in our contemporary world –it’s possible and necessary to make moral distinctions. That’s certainly the case in the current conflict between Russia and Georgia – where both sides may be imperfect, but one party to the conflict bears vastly greater guilt for aggression, destruction and obfuscation, while the other side remains far more worthy of sympathy and support.

The same logic applies to the American Presidential race and other political skirmishes of the moment. Both sides may be imperfect, but one faction carries a far more debilitating burden of obtuseness and relativism, while the other – for all its faults – strives more consistently for moral clarity and merits wider support.