Will the GOP Contenders Break Their Suicide Pact? 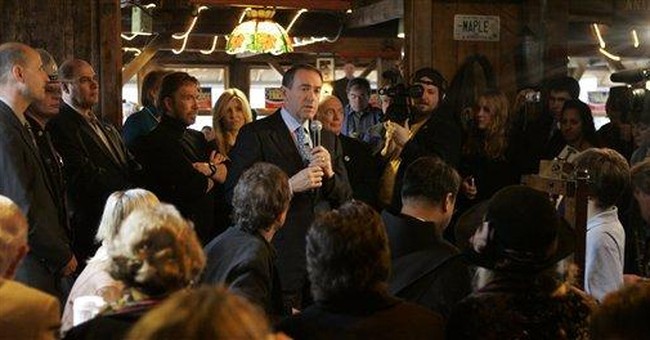 Whatever the final results of Tuesday’s New Hampshire Primary, the Republican Party endured four damaging days in the run-up to that climactic confrontation.

The two debates over the weekend (Saturday night on ABC TV, then Sunday evening on Fox News) showed our candidates at their worst and portrayed the party leadership as petty, angry, egotistical and out of touch. The dueling evaluations of who “won” and who “lost” the interchanges are beside the point – though, for the record, it seemed to me that Fred Thompson and particularly Rudy Giuliani managed to escape with less embarrassment and fewer wounds than Romney, Huckabee and McCain.

The problem wasn’t the performance of one candidate, but the negative and niggling tone of all of them – especially in contrast to their Democratic rivals. A few more weeks of this nit-picking, negative nonsense and we will turn a difficult general election campaign into an impossible one.

Following the New Hampshire tally, it’s crucial for the surviving GOP frontrunners to make two major changes in their collective approach: first, to begin focusing on the future rather than the past and, second, to stress their major, overwhelming areas of agreement rather than obsessing over their relatively trivial disagreements.

LOOK TO THE FUTURE, NOT THE PAST

The twin GOP debates featured fiery, extended exchanges over picayune details of little or no concern to the average voter. Did Mitt Romney really raise taxes in Massachusetts or did he just raise $240 million in fees? Did Mike Huckabee’s article that used a phrase citing the Bush administration’s “arrogant bunker mentality” indicate he wanted more negotiations or, as he now insists, more troops to do a more aggressive job? Did Mitt Romney read the article before he commented on it – or afterward? Did John McCain favor “amnesty” per se or merely “a form of amnesty” (as Mitt Romney now qualifies his attack)? Did Romney’s attack ads accuse McCain of amnesty, or not? Did Rudy make New York a full “sanctuary city” fourteen years ago or merely make accommodations for humanitarian reasons, like emergency medical care or reporting crimes? Did McCain vote against the Bush tax cuts because he loves high taxes (even though he’s never voted to raise taxes in 25 years in Congress) or because he insisted on linking cuts in taxes with cuts in spending?

These quibbles make all our candidates look like losers, who don’t understand that normal Americans don’t relish this childish game of “gotcha.” Voters worry about the high cost of gas, the congestion on the way to work, the crushing cost and insecure status of their health insurance, the punishing bills for their kids’ college education and, above all, a dollar that’s lost a huge chunk of its value and an economy that could slide into recession.

In this context, who cares if Mitt Romney once favored a “woman’s right to choose” or if Mike Huckabee backed a long-ago discarded plan to make some Arkansas illegals eligible for in-state tuition? The Mittster is now staunchly pro-life and the Huck is vying for the Minuteman vote with his “send-‘em-home-in-four- months” rhetoric. Every major politician has switched positions to suit changing circumstances, so it’s vastly preferable to compare plans for the future rather than rehashing dead and irrelevant arguments from the past.

When Ronald Reagan won the presidency in 1980, none of his opponents attempted to knee-cap his campaign by pointing out that he’d passed major tax increases as Governor of California and signed his state’s first legalized abortion bill. Reagan, and other GOP leaders of his era (including Fred Thompson’s mentor and Reagan’s one-time rival and later chief-of-staff, Howard Baker) understood that you connect with the voter by talking about what you want to do in the years ahead, not by dwelling on arcane details of what the other guy has allegedly done ten years ago.

Mitt Romney’s saturation attack ads (played every few minutes in Iowa and now in New Hampshire) have not only poisoned the campaign with mischaracterizations of the records of his opponents, but also set the agenda for horribly unenlightening and awkward debates that harmed all the candidates, very much including Romney himself. Instead of explaining his positive plans to deal with the very real problem of more than 12 million illegal immigrants living and working in this country, Romney and his rivals devoted lavish time to finicky finagling about the details of McCain’s former plan that already failed in the Senate.

Did anyone notice that in their debate on the same night as the Republicans, the Democrats spent no time at all discussing immigration? And the TV audience for that debate hardly seemed to mind: only 14% of viewers (according to an ABC poll) wished they had heard more from the Dems on immigration.

Using precious TV time to savage the record of your rivals represents an egregious waste and a brain-dead distraction at this moment of decision. Huckabee, McCain and most especially Romney, all seemed to invest more energy in attempting to provoke opposition to the other guys than in trying build support for themselves. Unfortunately, too many voices on talk radio (including some of the loudest voices in the country) have echoed this negative emphasis. Congratulations: we’ve now heard innumerable persuasive reasons to vote against Giuliani, McCain, Romney, Huckabee and Thompson.

All political junkies can recite the litany as well as I can: Rudy’s too moderate on social issues and his personal life is a sordid mess; McCain is too old and too unpredictable and he pushed through campaign finance reform; Romney’s a flip-flopper on abortion, gays, guns, taxes, immigration and everything else, and he’ll say anything to pander to an audience; Thompson’s too lethargic, a former lobbyist for Planned Parenthood, and he’s got a flashy trophy wife.

The sad part of this uncomfortable wallowing in shortcomings and scandals is that most of the candidates (especially Giuliani and Thompson, in fact) have tried to get attention for their positive proposals for conservative reform. How many observers can recall Rudy’s thoughtfully articulated “Twelve Commitments” or, for that matter, Thompson’s substantive and courageous recommendations for tax simplification and social security reform?

After New Hampshire, it’s imperative to turn our attention to what the candidates plan to do if they’re elected, rather than dwelling endlessly and annoyingly on what they’ve done (or haven’t done) in the past. Rather than arguing about who’s “most conservative,” how about debating who’s got the right ideas for dealing with the problems we face today?

If we don’t shift the conversation in that direction, we’ll be positioned for our nominee (whoever it happens to be) to lose in a landslide in November.

Whoever survives the New Hampshire winnowing (and there’s a real chance that all of the big five – Romney, McCain, Huckabee, Giuliani and Thompson – will continue their campaigns at least through Michigan, South Carolina, Nevada and Florida in the month of January), one of the front-runners ought to begin emphasizing agreement, rather than disagreement, with the other contenders.

On all the crucial issues, the Republicans easily could find common ground:

- All of them (of course excluding The Mad Doctor, Ron Paul) want to continue our offensive against Jihadism and to commit the resources necessary for a successful outcome in a stable Iraq. They all favor a strong expansion of our military.

- All of them (very much including John McCain) will fight to preserve the Bush tax cuts that have brought six years of economic growth and want to institute a vastly less burdensome and complex tax system.

- All of them want to complete the promised border fence, with greatly enhanced resources and personnel to block illegal immigration, while tightening workplace enforcement through an enhanced system of national ID’s. All of them also favor the deportation, as quickly as possible, of more than two million people with outstanding warrants for their apprehension.

- All of them want to make health insurance more affordable, available and secure by using free market means and enhanced free choice, not government funded give-aways or federal mandates.

- All of them want to sharply reduce abortions, and have pledged to veto any federal funding for abortion (yes, even Giuliani made that pledge – on my show). They’ve also all promised to appoint strict constructionist judges in the tradition of Scalia, Thomas, Alito and Roberts.

- They all want to push the U.S. toward energy independence, and back the rapid development of nuclear power and other alternatives for that purpose, while avoiding hysterical over-reaction to environmental threats that would bring government intrusion into private life.

The listing of areas of agreement could continue to innumerable other issues; while the GOP candidates may differ on means and plans, they generally agree on goals and values.

Why not renew and reinvigorate the campaign by acknowledging, and even stating, those broad areas of agreement? That could help to rally Republicans on which candidate offers the best new program for achieving those goals, rather than hammering away over which guy’s record serves these principles worst.

Take taxes, for instance: Mike Huckabee backs the radical reform known as the “fair tax.” Fred Thompson supports his own radical restructuring program, involving the elimination of numerous loop-holes and reducing the number of total tax brackets to a much “flatter” two (or three). Instead of going back to argue over an Arkansas tax dispute of 1997, or a Fred Thompson committee vote from 1999, why not explain these two plans and debate their virtues?

Everybody wants to halt illegal immigration into the United States. Rather than battling over which past plans constituted “amnesty” (which all candidates vociferously decry) why not look at the various proposed reforms and figure out which ones might stand the best chance of making a meaningful change?

Barack Obama has received phenomenally positive response for his insistence that “this country isn’t made up of red states and blue states; we’re the United States of America.” He has also drawn nearly universal commendation for his endless invocation of the words “hope” and “change.” If Republicans allow Obama and his fellow Democrats to claim those words as their exclusive possession, we’ll experience crushing, shattering defeat in November.

Part of the “hope” that Obama preaches involves an end to bickering, to bitter partisanship, to “higher ground” and “common ground.” Cynics rightly observe that Democrats only favor such common ground when it comes in their own terms, but there’s no doubt that the Illinois Senator has touched a sensitive and responsive chord.

While the leading Democrat pleads for an end to mean-spirited attacks and the politics of fear, it’s an obvious disaster --- a suicidal disaster, in fact – if the Republican candidates continue to assault one another with precisely that meanness, pettiness and bad temper that the American people wholeheartedly have come to despise.

As another charismatic Democrat (JFK) once pointedly reminded us: “We can do better.”