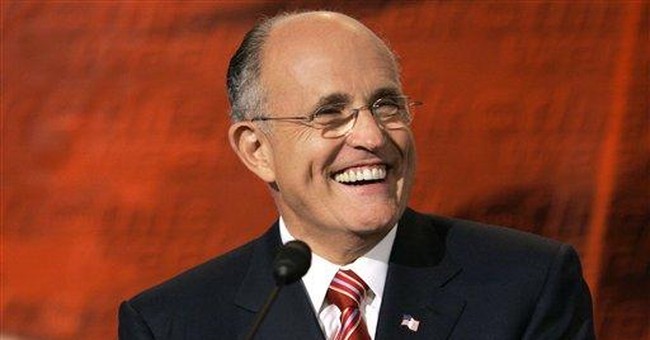 If there’s one sentiment that seems to unite desperate Republicans in the run-up to the campaign of 2008 it would seem to be profound discomfort, if not outright disgust, with the current field of Presidential candidates.

I’ve heard literally dozens of demoralized friends and colleagues express their frustration with this crop of contenders in remarkably similar terms. The common mantra usual proclaims that this must count as “the worst group of Republican candidates in all of American history.”

Of course, this grim conclusion raises an obvious question: if this field amounts to the worst clutch of candidates ever, then which year yielded a better array of choices?

Last time (2004) there was no GOP alternative to President Bush. Does this constitute a richer spectrum of choices?

In 2000, the only serious, durable alternative to Bush was Senator McCain – and he’s an alternative once again this time. The other candidates included ego-tripping Senators Orrin Hatch and Bob Smith – who, in the style of this year’s Sam Brownback, ran more for attention and publicity than with any real thought of winning anything.

The 2000 race also brought its share of hard-right fringe candidates: Gary Bauer, Alan Keyes, Steve Forbes and Pat Buchanan (Buchanan eventually left the Republican Party to run on the “Reform Party” ticket, garnering a paltry 0.4% of the vote.) At least this year’s angry fringe candidates (Tom Tancredo, Ron Paul and Duncan Hunter) can point to real political experience, having each won many terms in the House of Representatives. When it came to Bauer, Keyes, Forbes and Buchanan eight years ago, as well as the brief campaign of Elizabeth Hanford Dole, none of them had ever won election to public office before. Why would we consider a field full of seasoned political veterans less formidable than a group of stumbling amateurs?

Going back to other recent elections, the struggle for the ’96 nomination came down to Senate Majority Leader Bob Dole, columnist Pat Buchanan, and former Tennessee Governor Lamar Alexander—with the Buchanan and Alexander campaigns quickly collapsing in the face of Dole’s established position in the party. As in 2000, magazine publisher Steve Forbes and unemployed orator Alan Keyes also tried, without much success, to generate support and other members of the Senate and House (“B-1 Bob” Dornan, Senators Richard Lugar of Indiana and Phil Gramm of Texas) briefly put their names in play before hasty withdrawal. Who, precisely, in that uninspiring field makes it tower over today’s choices of Giuliani, Thompson, Huckabee, Romney and McCain?

And then there was the nomination scrap of 1988, where Vice President George Herbert Walker Bush ultimately prevailed (after finishing third in the Iowa Caucuses) against Senator Bob Dole and religious broadcaster Pat Robertson. Delaware Governor Pete DuPont, former Congressman Jack Kemp, and former Secretary of State Al Haig also bid for Presidential support, but dropped out long before the convention.

I’m running through this recent political history in order to put our current crop of candidates in proper perspective.

We all know the drawbacks of each of the major contenders, and we’ve heard them enumerated on countless occasions: Giuliani is wrong on abortion and went through two messy divorces; Romney is a slick, pandering flip-flopper and the member of a controversial religion; McCain is too old and too cantankerous, having alienated most of the party’s base; Thompson looks indecisive with his delayed entry and seems often upstaged by his micro-managing Trophy Wife; Huckabee can’t seem to raise money, and his background as a Baptist preacher would alienate Catholic voters.

Of course, in any crop of GOP candidates from any year in history, one could go through the list and quickly disqualify all of them. Concerning Ronald Reagan in 1980, for instance: you could say he was too old (nearly 70), too right wing, too “Hollywood” (with suspicions of dyed black hair), divorced, too simple-minded – a “dummy actor” turned two-term governor with no foreign policy experience whatever, but who somehow became one of our greatest presidents.

The only reason this list of candidates sounds more impressive than the roster of today’s contenders is because it includes the name of Reagan – and we know how he turned out for his party and for his country. But Republicans can only damage our chances for the future if we dwell too obsessively over the glories of the past.

Recently, I hosted a Reagan Ranch Center commemoration of President Reagan’s “Tear Down This Wall” address with former White House speechwriter Peter Robinson, who helped the President prepare that speech. A member of the audience asked Robinson who he believed would be “the next Ronald Reagan” and the one-time White House aide very wisely commented: “There won’t be another Ronald Reagan. He was singular, one of a kind, like Lincoln and Churchill. We get that kind of leader only once a generation, maybe once a century. We shouldn’t expect or demand another one. We were lucky to get one, and we should feel thankful for it.”

In this context, we ought to cut the current candidates some slack and compare them to their predecessors in recent nomination fights, or to the likely Democratic alternatives—not try to measure them against one of the greatest Republicans who ever lived.

In fact, all five of the leading contenders – Giuliani, Thompson, Romney, McCain and Huckabee—are smart, fascinating individuals with compelling stories to tell. Already, they all display better television communication skills than President Bush – and they all give evidence of getting even sharper in their presentations as the campaign advances. Each of the big five has achieved notable success in previous endeavors – though Romney more in the business world and at the Olympics than in his one term as Massachusetts governor, and Thompson more as a crusading attorney in Tennessee and a likable Hollywood star than in his short service in the Senate.

Given the actual, undeniable strength of the Republican candidates, then why do so many GOP activists and insiders sound so dispirited about the choices before us?

There are three basic reasons that this field looks much worse than it is:

1.THE STATURE GAP: In all recent nomination fights, Republicans have possessed one obvious and overwhelming frontrunner: Nixon in ’68 and ’72, Ford in ’76, Reagan in ’80 and ’84, George H.W. Bush in ’88 and ’92, Dole in ’96, and the younger Bush in 2000 and 2004. Half of these dominant figures (Nixon, Ford, and the first Bush) have been Vice Presidents of the United States while the other three also possessed formidable credentials – Governor of California and previous Presidential candidate (Reagan), Senate Majority Leader and previous candidate (Dole), and Governor of Texas and son of a former President (the second Bush).

This time there’s no over-shadowing “big guy” in the GOP Presidential race---no well known front-runner to make the whole field look more credible. Hillary Clinton shows the way that a strong, household name front-runner can even make rivals look bigger and more significant: she’s so far in the lead, and so familiar to every American, that Hillary vs. Obama quite naturally sounds like more of an epic battle royal (despite the untested nature of both candidates in national campaigns) than, say, Rudy vs. Romney. With no one Republican emerging from the pack, it makes it harder to visualize any of the fiercely competing rivals actually measuring up to the Presidency.

Obviously, the Democratic “firsts” (okay, all except Mike Gravel) sound more thrilling to the press and public. Part of the GOP discomfort with our candidates involves a sense of envy, either openly acknowledged or sometimes unconscious: we look over to the other party and see their contenders raising more money and drawing far more positive press (Democrats always do). No wonder we feel less than thrilled as the race begins to shape up.

3. TOO MANY INDIANS. The sheer size of the Republican field keeps any one contender from emerging into the sunlight and makes all the competitors look smaller and less imposing than they should. The Democratic race has already taken clear shape: it will pit Hillary against Obama until one of them (almost certainly Obama) abandons the field. Other candidates, including Con Edwards and Bill Richardson, look increasingly like also-rans (and Vice Presidential possibilities). Among Republicans, however, Rudy, Romney and Thompson all remain obviously competitive, with outside chances (still) for McCain and Huckabee (if they can solve their fundraising problems).

In addition there are the yipping pups (Hunter, Brownback, Tancredo, Paul) who prevent any of the Big Dogs from looking fierce and formidable. They have no more chance of winning the nomination than former governors Jim Gilmore and Tommy Thompson, who already dropped out. And every time the distraction candidates appear alongside serious contenders, it makes them all look less significant – more like the proverbial Nine Dwarves. With too many Indians in their Presidential tribe, the Republicans face a tougher time settling on a chief.

Considered on a rational, dispassionate basis, none of these problems should bring about permanent crippling of GOP prospects in the general election. Each of the difficulties – the stature gap, the greater Democratic excitement, and the confusing plethora of contenders -- should sort itself out as the race proceeds, and some excitement begins to build while distraction candidates fall away (or else go off to the fringe-party fate that some of them seem to crave).

Instead of whining about the low quality of the current candidate collection, Republicans ought to take a serious look at all of these formidable (if flawed) contenders, giving at least as much attention to their significant strengths as to their much-discussed weaknesses. Any of the Big Five – Rudy, Romney, Thompson, McCain, and Huckabee—could plausibly beat Hillary and recent polling shows a sharply competitive race.

Republicans can win that competition if we place our contenders in an appropriate context and recognize that this may comprise the best, not the worst, assemblage of Presidential contenders we’ve seen in recent years.