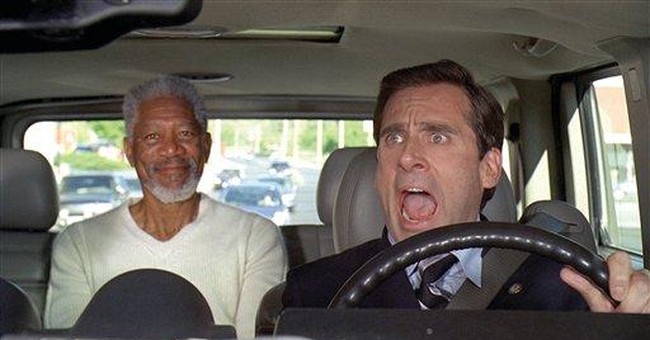 Christopher Hitchens has been abundantly blessed for attacking God.

His outrageous and entertaining book, “god is not Great: How Religion Poisons Everything” has become a major bestseller and earned its sardonic author more than a million dollars, according to a recent estimate by the Wall Street Journal.

For any sophisticated religious believer, this powerfully popular work represents a maddening combination of stimulation and sloppiness, erudition and ignorance, provocation and puerility.

The sly distortions and grotesque errors that appear in every chapter of his work demonstrate the author’s carelessness and arrogance. In one especially appalling example (on page 100), Hitchens writes of “the pitiless teachings of the god of Moses, who never mentions human solidarity and compassion at all.” He thereby ignores the most celebrated commandment in the Five Books of Moses, “Love your neighbor as yourself” (Leviticus 19:18), identified by Jewish sages (and in Matthew’s Gospel by Jesus himself) as the very essence of the Hebrew Scriptures. Hitchens also fails to acknowledge the innumerable Old Testament injunctions to show loving-kindness and mercy in dealing with widows, orphans, strangers, and the poor. Whether one imputes these teachings to God or to Moses, they hardly qualify as “pitiless” and most certainly emphasize “human solidarity and compassion.”

Beyond its factual errors and obvious misstatements, “god is not Great” (Hitchens makes a point of never spelling the word “God” with a capital “G”) provides a frequently primitive and juvenile characterization of religious belief. Near the conclusion of his book he suggests that “religion offers either annihilation in the name of god, or else the false promise that if we take a knife to our foreskin, or pray in the right direction, or ingest pieces of wafer, we shall be ‘saved.’” This breezy dismissal obviously misrepresents Christianity (with most denominations considering a relationship with Christ more important to salvation than consumption of magical wafers) but also misses the entire thrust of Judaism, which never mandated circumcision for non-Jews nor limited a share in the afterlife to members of the House of Israel.

The countless quibbles with the book’s shoddy scholarship and clumsy mischaracterizations of Biblical tradition easily could fill a separate corrective volume or take up any opportunity for interview or debate with Mr. Hitchens. On my radio show, I therefore decided to avoid focusing on such details when he agreed to talk with me for two full hours earlier today. Rather than spending precious time proving that he shamefully misquoted the 11th Century sage Moses Maimonides, or challenging his odd insistence (emphatically and tellingly repeated on my show) that a charismatic teacher named Jesus of Nazareth never even existed, I concentrated instead on five core questions to challenge his fundamental argument that “religion poisons everything.”

1. Some 24 years ago Hitchens abandoned his British homeland and chose to make his life in the United States. This April, he proudly took the oath as a naturalized American citizen at the Jefferson Memorial. He has written movingly and persuasively of his love for his adopted country—despite the fact that throughout its history the people of the United States have proven notably more committed to their predominantly Christian faith than their Western European counterparts. A previous visiting journalist named Alexis de Tocqueville described America as “a nation with the soul of a church” and Hitchens conceded that to this day more Americans engage in regular prayer and Bible study than do the citizens of any other advanced Western nation. If religion indeed “poisons everything” then why has it so pointedly failed to poison the United States – producing, instead, a nation that Hitchens himself openly prefers to any other?

2. Throughout his book, Hitchens attacks “religion” in general, regularly dismissing the common fallacies he identifies in all major faiths, assaulting Islam, Christianity and Judaism with comparable gusto. In so doing, he inadvertently lets homicidal and self-destructive Islamo-Nazis off the hook: conflating today’s suicide bombings in the name Allah with medieval pogroms in the name of Jesus, or Biblical accounts of Israelite violence against the ancient Amalekites. The generalized indictment of “religion” fails to acknowledge the unique cruelty and insanity of contemporary Islamism; like leftist apologists for terrorist crimes, he takes the position that “all religions are guilty” so Muslim fanatics bear no unique culpability. In the style of Cold War skeptics who discerned an absurd moral equivalence between the United States and the Soviet Union, he ends up trivializing the monstrousness of current jihadist dogma by comparing it to Christian and Jewish teachings that produce no similarly bloody consequences in today’s world. In the same sense, he specifically likens the hideous, indefensible practice of female genital mutilation in “some animist and Muslim societies,” with the circumcision of baby boys which, unlike clitorectomy, boasts abundant defenders (and practitioners) within the modern medical community. By assailing all religions as similarly barbaric and primitive, Hitchens effectively denies the singular dangers and dementia of Islamism which he has vividly delineated in other contexts.

3. Hitchens emphasizes his fervent belief in Darwinian evolution as the process that produced all life forms and facilitated human advancement but in this context offers no explanation for what some scientists have identified as “the God gene.” Natural selection means that any characteristic that confers reliable advantage on a species will survive and spread, while an attribute that handicaps this organism will, ultimately, disappear. If, then, “religion poisons everything,” how can one explain the persistence throughout human history of the religious impulse, and the sturdy survival of our pious instincts throughout the modern era? In confronting that challenge today, Hitchens alluded to prehistoric times in which medicine hardly existed, but suffering individuals might consult a witch doctor or shaman for superstitious cures. Even though these ministrations provided no physiological benefit, he argued, they helped the sufferers by adding to their confidence of recovery and emotional health—thereby conferring some evolutionary advantage to the faithful. This strained explanation for the widespread survival and vigor of organized religion in effect concedes a fundamental argument of many believers --- that regardless of its theological accuracy, a strong faith can make people healthier, happier and more productive, or at least healthier and longer-lived.

4. In describing himself and his fellow atheists near the opening of his book, Hitchens declares: “We are not immune to the lure of wonder and mystery and awe: we have music and art and literature, and find that the serious ethical dilemmas are better handled by Shakespeare and Tolstoy and Schiller and Dostoyevsky and George Eliot than in the mythical morality tales of the holy books. Literature, not scripture, sustains the mind and –since there is no other metaphor- the soul.” Ironically, all the literary giants he describes as ethical guides were themselves guided, or at least informed, by their deep belief in God—in fact two of them (Tolstoy and Dostoyevsky) were full-out religious mystics. How can Hitchens unblushingly look to these writers as the right source for handling “serious ethical dilemmas” when their lives and work showed the unmistakable influence of religious teaching which he elsewhere holds in rank contempt?

5. In discussing the reaction to his book, Hitchens describes the polite reception he’s received in debating God’s existence at various churches and synagogues around the country, and acknowledges the lack of threat or rage from those who disagree with his angry dismissal of religious faith. In other words, even deeply devout Americans have, by and large, responded with tolerance, geniality and an eagerness to debate the issues he raises. By contrast, Hitchens himself viciously denounced Jerry Falwell on the very day of the evangelist’s death, declaring him “a hateful little toad,” “a fraud” and “a charlatan” and insisting (in a televised interview on CNN) that Falwell never sincerely held the beliefs he professed over the course of his long, productive lifetime. In other words, the atheist Hitchens showed less tolerance and generosity to a just deceased preacher than religious critics and commentators display to Hitchens in responding to his furious, anti-religious book. On the air, Hitchens answered this challenge by reminding the audience that many ardent believers argue that all the irreligious will end up with the torments of hell, so they don’t need to specifically indict or denounce one outspoken author. This dodges the reality, however, of an obvious “kindness gap”: Hitchens never challenged my assertion that if Falwell had been given the opportunity to comment on Hitchens’ death, rather than the other way around, the language would have proven more measured, forgiving, and considerate of the grieving family.

This brings me to the challenge that Hitchens has posed in various debates across the country, and which he put forward once again on my radio show. He offers a prize to anyone who can come up with an ethical declaration or behavior that a religious believer could urge or demonstrate that couldn’t equally win endorsement from an ethical atheist.

This challenge undermines none of the serious arguments for faith – only a fool would suggest that all atheists will prove incapable of moral conduct or sentiments. The enduring case for associating religious teaching with human goodness doesn’t contend that Biblical truth alone makes such goodness possible, but rather that religious adherence makes that decency more likely. In his compelling recent book “Who Really Cares,” my friend Professor Arthur Brooks of Syracuse University shows that the faithful contribute to charity and volunteer their time to compassionate causes with far greater consistency and generosity than their secular colleagues.

One might quarrel that these statistical studies reflect only a coincidental connection between religious belief and good behavior, but they certainly undermine the Hitchens contention that “religion poisons everything.” Reminders of the unspeakable viciousness of the long-ago Crusades, or of the bloodthirsty and degenerate tendencies of present day Muslim fanatics, can’t erase the kindness and warm-hearted good fellowship of religious communities across the United States this week and the next, or the generosity and consideration that most of those communities display even to non-believers.

The greatness and goodness of the American experiment haven’t arisen in spite of the nation’s ardent religious heritage, but because of it. For those of us fortunate enough to enjoy the blessings of this freakishly favored society, religion hardly amounts to a poison, but represents rather the elixir of life.