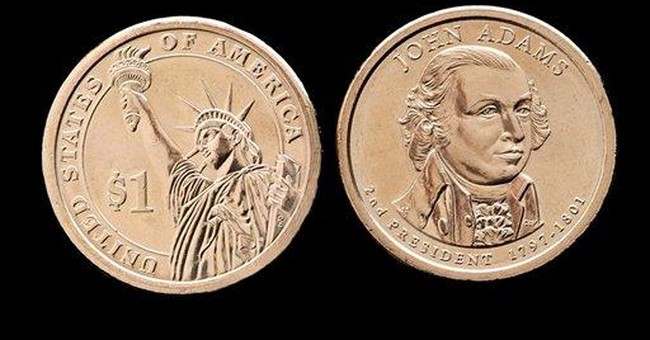 On July 2, 1776, after long and wrenching debate, the Continental Congress voted to declare independence from the Mother Country and the next night John Adams went back to his rooming house in sweltering, sticky Philadelphia to write, by candlelight, two of the most famous letters in American history. Addressing his beloved wife Abigail in far-away Boston, he exulted in the birth of a new nation:

The second day of July, 1776, will be the most memorable epocha in the history of America. I am apt to believe it will be celebrated by succeeding generations as the great anniversary festival. It ought to be commemorated as the day of deliverance, by solemn acts of devotion to God Almighty. It ought to be solemnized with pomp and parade, with shows, games, sports, guns, bells, bonfires, and illuminations, from one end of this continent to the other, from this time forward forevermore.

You will think me transported with enthusiasm, but I am not. I am well aware of the toil and blood and treasure that it will cost us to maintain this Declaration and support and defend these states. Yet, through all the gloom, I can see the rays of ravishing light and glory. I can see that the end is more than worth all the means. And that posterity will triumph in that day’s transaction, even although we should rue it, which I trust in God we shall not…

It may be the will of Heaven that America will suffer calamities still more wasting, and distress yet more dreadful. If this is to be the case, it will have this good effect at least. It will inspire us with many virtues which we have not, and correct many errors, follies and vices which threaten to disturb, dishonor and destroy us. The furnace of affliction produces refinement, in States as well as individuals...But I must submit all my hopes and fears to an overruling Providence, in which, unfashionable as the faith may be, I firmly believe.

The prophetic nature of his vision still makes the heart race and takes the breath away, some 231 years later. Predicting “illuminations” (the 18th Century term for fireworks!) to celebrate Independence Day from “one end of the continent to the other” remains almost freakishly prescient. When Adams wrote those words, the colonies occupied only a narrow, intermittent strip of settlements along the eastern seaboard; the very notion of a true continental nation looked wildly implausible, all but unimaginable.

The one mistake in Adams’ view of the future involved his assumption that future generations would celebrate the Second of July (the date of the adoption of the resolution for Independence) rather than the Fourth of July (the date Congress approved the specific wording of the Declaration which Adams had helped his friend Thomas Jefferson to write.

In any event, those who insist on dismissing or denying the nation’s deeply religious heritage should ponder the words of this “Atlas of Independence.” Adams expects that we will celebrate the nation’s founding through “solemn acts of devotion to God Almighty” (don’t tell the ACLU!). After bitter, exhausting political battles in Philadelphia (corresponding to simultaneous -- disastrous -- military battles conducted by Washington’s army in New York) he recognized the role of Providence in the ongoing struggle and, at a moment of exultation, proved himself not just a far-seeing leader, but a prophet.

In a prior letter to Abigail (in 1775), Adams went even further in emphasizing the association of patriotism and religiosity – a connection maintained with interruption from his time to our own. “Statesmen may plan and speculate for liberty, but is Religion and Morality alone which can establish the principles upon which freedom can securely stand,” he wrote. “A patriot must be a religious man.”

With his words in mind, it makes sense for so many churches to sponsor special July 4th programs, and to emphasize the always appropriate messages of “God bless America” and “America, America, God shed his grace on thee.” The last verse of “The Star Spangled Banner” contains the lines – “And triumph we must/As our cause it is just/And this may our motto/”In God is our trust.”

May we observe our nation’s founding in the spirit of our founders – combining celebration with solemnity, and expressing our devotion to God and to country.