Should Mormonism Disqualify a Candidate? 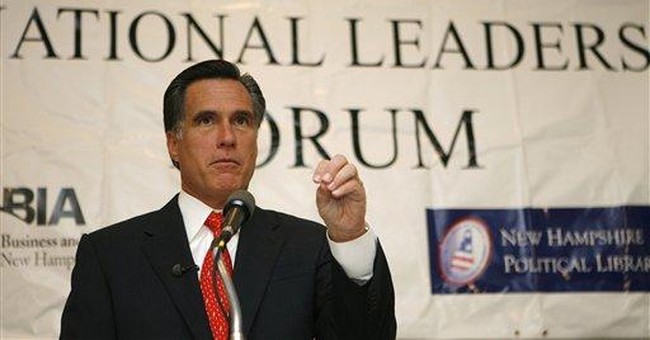 Does the Church of Jesus Christ of Latter Day Saints constitute a benevolent, mainstream religion or a dangerous cult with a deranged and bloody past?

Polls suggest that as many as one-third of voters rule out supporting a Mormon candidate due to negative impressions of his religious faith and one Florida televangelist (Bill Keller) has already declared to his audience of more than two million that “A vote for Romney is a vote for Satan!” In more temperate terms, one of my prominent talk radio colleagues, Mike Gallagher, also announced that he could not in conscience vote to elect a Mormon president.

Meanwhile, an upcoming Hollywood film with a few veteran stars (Jon Voight, Terrence Stamp, Lolita Davidovich) focuses on one of the darkest episodes of early Mormon history: the so-called “Mountain Meadows Massacre” on September 11, 1857. The movie “September Dawn” pointedly ignores all exculpatory evidence and holds Mormon prophet Brigham Young directly responsible for the murder of 120 innocent members of an Arkansas wagon train. The film (scheduled for national release on June 22) portrays the entire Mormon Church as a demented, cruel, utterly corrupt conspiracy while quoting Young wildly out of context to make the Utah pioneer come across like a nightmarish combination of Jim Jones and Osama bin Laden.

Some of Governor Romney’s political allies insist that attacks on Mormonism bear no relevance to his Presidential candidacy: my friend and colleague Hugh Hewitt, for instance, argues in his fascinating book “A Mormon in the White House?” that it’s illegitimate to evaluate any candidate based on the theological particulars of his (or her) faith.

CARTOONS | AF Branco
View Cartoon
This worthwhile principle does not suggest, however, that all religious traditions deserve equal respect.

Recent news items, for example, focused on a sect in Kenya known as the “Mungiki…a shadowy religious group with ties to the Mau Mau independence uprising against the British…. The group comprises snuff-taking, dreadlocked youths who champion old traditions like female genital cutting and oath-taking.” Kenyan officials blamed the Mungiki “for the recent beheadings of four people, whose bodies were chopped up and strewn in bushes in central Kenya.”

Obviously, a Presidential candidate who proudly proclaimed membership in the Mungiki faith ought to be ruled out of consideration – regardless of his personal charisma or record of governmental achievement. By the same token, a contender for high office who espoused the radical Islamist ideology associated with al Qaeda, or Hamas, or Hezbollah, deserves determined opposition based solely on his religious ideology.

What Governor Romney’s defenders need to acknowledge is that the most strident and harsh among anti-Mormon activists believe that the LDS church represents a denomination as menacing as fanatical Islamism and as demented as Kenya’s Mungiki. If they are correct about Mormonism, then there’s reason to support the tens of millions of Americans who currently claim they will never consider voting for a Mormon candidate.

To put the charges against Mormonism (or any other religious faith) in proper perspective I would suggest three rules to determine whether a denomination counts as decent or dangerous:

1-Forget about theology – to outsiders, all religious beliefs look weird and irrational. Most of the anti-Mormon arguments emphasize the alleged absurdity of LDS doctrine, or purportedly preposterous historical accounts in the Book of Mormon, to question the intelligence or even the sanity of anyone who chooses to embrace that faith. The easiest way to discredit or at least discount these arguments would be to consider the recent work of outspoken atheist Christopher Hitchens: in his latest book, “God is Not Great,” he rips into mainstream Christianity (and Judaism and Islam and all Eastern faiths) with the same gleeful ferocity with which many Christians attack Mormonism.

For instance, Catholic (and many Protestant) believers may revere the practice of Holy Communion, but non-believers have always ridiculed the cannibalistic notion that eating the body and blood of your “dead god” represents some sort of inspiring or sacred activity. By the same token, critics of Judaism deride the thought that we take our helpless sons at the age of eight days and cut away a natural part of their tiny, intimate equipment, while the entire community celebrates. In other words, every religious faith contains elements of ritual or ideology that look illogical, even embarrassing to outsiders. The only fair basis for judging a faith community involves the way its adherents put its distinctive ideas into practice –and to determine whether those beliefs damage or benefit the world at large.

2-Don’t judge a religion’s present impact and influence based upon the excesses or abominations of its past. Whenever some sane observer notes the murderous cruelty of today’s Islamo-Nazi terrorists, Muslim apologists and various moral relativists love to bring up Christian misdeeds during the period of the Crusades and the Inquisition. This pathetic rhetorical trick (or tic, actually) represents an inane attempt to equate the homicide bombings of 2007 with the dreadful persecutions of a thousand years ago. Yes, it’s true that Jewish tradition teaches that King Saul bore an obligation to exterminate every soul among the Amalekites he conquered more than 3,000 years ago, but that ancient history bears no meaningful connection to the murderous Hamas drive-out-the-Jews policy of the 21st Century.

Muslim fanatics proudly affirm their intention to replicate the aggressive conquests of their Seventh Century predecessors, but today’s Christians readily acknowledge their vast differences from their Medieval predecessors, just as modern-day Jews recognize that today’s Israel bears very limited functional resemblance to ancient Judea. In this regard, it’s profoundly unfair to judge Mormons of the moment based on long-ago episodes of early Mormon history like the Mountain Meadows Massacre. It’s true that the most embarrassing elements of the LDS past occurred far more recently than the comparably controversial episodes of Christianity or Judaism, but the Mormon Church represents a vastly more recent religious tradition – chartered for the first time on April 6, 1830. The savagery of Mountain Meadows, in other words, occurred just 27 years after the religion’s origination and in the course of the succeeding 150 years it’s hardly been repeated.

By the same token, it’s fascinating to read of Brigham Young’s 51 wives and to debate the old Mormon practice of polygamy, but the church officially repudiated “plural wives” in 1890 and shortly thereafter began excommunicating those who persisted in the practice. In other words, for two thirds of the total history of the LDS faith, the church has sanctioned only monogamous marriage—so trying to tar modern Mormons like Romney with the multiple wives of his long-dead ancestors represents a shamelessly unfair smear tactic. One might as well criticize contemporary Catholics (or Protestants, or Eastern Orthodox, for that matter) for past slaughter of various heretics and unbelievers (including fellow Christians, of course)– since such butchery took up a much higher percentage of the total, 2,000 year history of Christianity than did polygamy of the 177 year history of Mormonism.

3-The only basis for evaluating a religion is the constructive or destructive behavior of its adherents: do their attempts to live their faith make the world around them better or worse? A quick trip to Utah (with its 70% LDS population) should disabuse even the most embittered anti-Mormon fanatic of the notion that this faith amounts to a malevolent cult.

Sure, you’ll find irritating elements of Salt Lake City (or of Provo, for that matter, where I faced profound challenges in securing a desperately needed cup of Mormon-banned coffee during my visit to Brigham Young University) but the statistics about the Beehive State don’t lie: in terms of health, longevity, family life, crime, productivity, and general livability, this Mormon “Promised Land” compares very favorably with its neighbors in the inter-mountain West. Many “gentiles” (non-Mormons) look with admiration at the LDS practice of sending their young people on missionary assignments as part of the maturation process, or reserving one night a week for families to spend time together at home. Recounting stories of the “Mormon Wars” in which early followers of Joseph Smith battled with their often hostile, violent neighbors in Ohio, Missouri, and Illinois, shouldn’t distract attention from the educational, cultural, charitable and business institutions which Mormons have established with indefatigable energy.

Even the scurrilous (and often hilarious) TV cartoon show “South Park,” concluded a 2003 episode ridiculing the story of Joseph Smith and his golden tablets, by acknowledging that today’s Mormons make famously good neighbors, displaying niceness and kindness to an occasionally cloying extent. While it makes perfect sense to condemn Islamo-Nazis for blowing themselves up to slaughter innocent women and children, or to decry the Mungiki for random beheadings and mutilations of females, there’s no similar basis for attacking Mormons because they send eighteen-year-olds on bicycles in skinny ties to witness to people about the descendants of Nephi.

In short, while certain contemporary religious communities richly deserve harsh judgment and even condemnation, the Church of Jesus Christ of Latter Day Saints hardly qualifies as a current danger or a spur to criminal, destructive behavior. You may well disagree with the church’s ban on premarital sex, or social drinking, or showing all R-rated movies (including “Schindler’s List”) on premises it controls (like Brigham Young University), but such disagreements might constitute grounds for leaving the church, not assaulting it from outside.

All religions have not been created equal (whether you believe that God, or man, created them) but in a pluralistic nation like the USA, candidates of any faith that exemplifies good citizenship and neighborliness (as the LDS church most emphatically does) deserve equal respect from prospective voters.